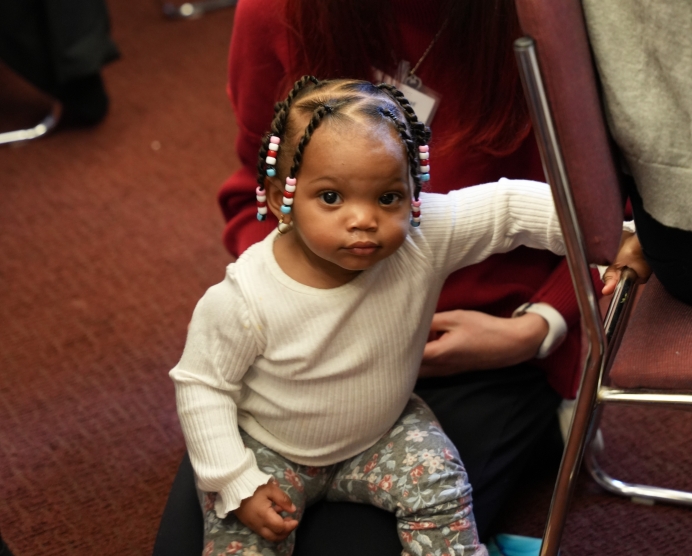 Babies and mothers go to Congress, share how pregnancy resource centers helped them in time of need

(The Daily Signal) Babies and toddlers are not a common sight in the U.S. Senate. But, on Thursday, one day before the 50th March for Life, moms and little ones arrived on Capitol Hill to explain how pro-life pregnancy resource centers and maternity homes helped them in their time of greatest need.

“Had I not come in contact with these women’s centers, I probably would be dead somewhere,” Evalynn Davis said at the “Babies Go to Congress” luncheon in the Russell Senate Office Building.

Davis was one of three women who traveled to the nation’s capital with their children for Heartbeat International’s annual “Babies Go to Congress” event. Participants met with members of Congress over the course of the three-day event, sharing “their stories of how their local pregnancy help organization helped them through a difficult time in their life. Some with a pregnancy test, some with housing, some with ultrasound, and some with mentorship programs,” the organization explains on its website, adding:

Each story is different, but highlights the fact that once each woman entered the center, they continued the relationship with the pregnancy help organization.

Davis, who is now 31 and from Cincinnati, had her first abortion when she was 19. Five years later, she had a second abortion that almost took her life because of an infection following the procedure. A few years later, Davis found out she was pregnant again. She already had a three-year-old son, was not married, and was working as a “high-end prostitute.”

It was a Friday, and she was scheduled for an abortion pill consultation on the following Monday, but she wanted to know how far along she was in her pregnancy. Davis says she was “determined to get an abortion,” but Googled “free ultrasounds” and found the pro-life Women’s Center in Dayton, Ohio.

Holding the ultrasound in her hand, Davis said, she thought, “I’m at a fork in my life, where I’m going to choose between life and death,” adding that at the time, she did not know the choice for life “was representing my life as well, not just my baby’s life.”

“I chose life for my little boy, Hezekiah, and shortly after that I gave my life to Christ,” she said. In 2022, Davis graduated with a bachelor’s degree from the University of Cincinnati and married a “loving husband who is raising two children that are not his.”

Hezekiah is now a year old and “he is the happiest baby,” Davis said.

Since the “Babies Go to Congress” event began in 2009, Heartbeat International has taken more than 180 moms and babies to Washington to visit nearly 400 congressional offices.

Davis met with congressional staff from the offices of Reps. Mike Turner and Warren Davidson, both R-Ohio, and those of Republican Sen. J.D. Vance and Democratic Sen. Sherrod Brown, also both of Ohio.

The mother says she was glad to be a part of informing the lawmakers’ offices of the ways pregnancy resource centers fill the gaps in assistance that programs such as Medicaid don’t offer.

Participants in the “Babies Go to Congress” event met with 12 congressional offices, including staffers from Reps. Abigail Spanberger, D-Va., and Bob Good, R-Va.; Sens. Tim Kaine and Mark Warner, both D-Va.; Reps. Keith Self and Pat Fallon, both R-Texas; and Sen. Ted Cruz and John Cornyn, both R-Texas.

Kandice Morgan of Texas also shared her story of choosing life for her daughter Zoe. Morgan, 36, had an abortion in 2015 and said she dealt with shame and remorse afterwards. In 2019, Morgan found out she was pregnant again. It was welcome news this time, and Morgan says her whole family celebrated the arrival of her son, but less than a year after her baby boy was born, she found out she was pregnant again.

“Everyone immediately was, like, ‘You have to have an abortion. You guys can’t have this baby.’” Morgan says she and her boyfriend didn’t want to opt for an abortion, but were stressed and scared. They went to Real Options, a pro-life center in Allen, Texas, where Morgan said the staffers informed her of all of the alternatives.

“I never felt judged,” Morgan said of her experience at the pregnancy help center, adding, “It felt like family. The support and the family that I didn’t have, they became that, and they empowered us to make the right decision.”

Today, Zoe is a happy and healthy toddler, and the women who supported Morgan and her family at Real Options remain close friends to this day.

The “Babies Go to Congress” event comes just months after at least 78 pro-life organizations were attacked and vandalized, according to Catholic Vote. The attacks began in early May after the leak of the draft opinion of the Supreme Court in Dobbs v. Jackson Women’s Health Organization, which ultimately overturned Roe v. Wade in late June.

In July, Sen. Elizabeth Warren, D-Mass., criticized the work of pregnancy resource centers across the country.

On Jan. 11, the House passed a resolution to condemn the attacks on pro-life organizations. More than 200 House Democrats opposed the resolution, with just three Democrats joining Republicans to vote in favor of condemning the attacks.

“Especially at this point in history, I think it is important that people understand the power of pregnancy help and what pregnancy help does,” Tracie Shellhouse, vice president of ministry services for Heartbeat International, told The Daily Signal.

Tweet This: “Especially at this point in history, I think it is important that people understand the power of pregnancy help & what pregnancy help does”

Editor's note: This article was originally published by The Daily Signal, the Heritage Foundation's news platform.