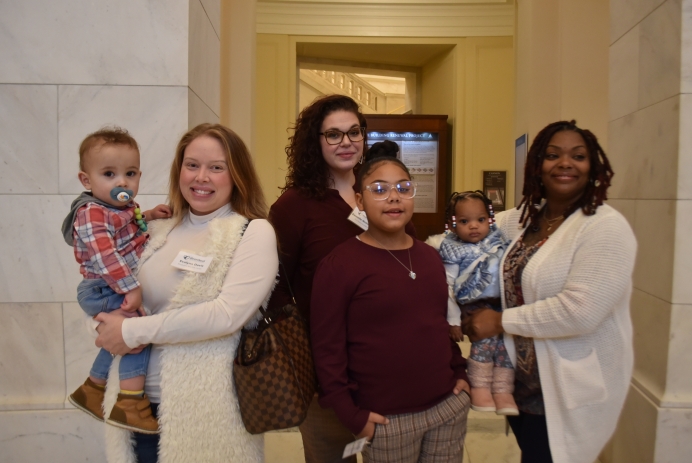 Gratitude was a common theme for three mothers who came to Washington D.C. to help federal lawmakers understand that pregnancy centers are good for America. Grateful for their children and the pregnancy help that they received, the moms were also thankful for the opportunity to share their stories as part of Babies Go to Congress.

Heartbeat International has hosted more than 180 moms and babies in Washington D.C. for visits with nearly 400 Congressional offices since 2009 with this initiative.

Moms sharing their stories in their own words with federal lawmakers and staff brings the significant impact of pregnancy help home with a real-world human element, and these latest moms were no exception.

Seeing the pregnancy test with two lines on it was the scariest thing ever for her, Danielle said.

“It was not a part of my plan whatsoever,” she said. “It shook me to my core, and it immediately made me change my life and all of my decisions.”

She had been living a pretty rough life prior to getting pregnant, she said, involving criminal activity, drugs, and alcohol.

Danielle did not have a big support system - that is, until she found the Paul Stefan Home.

Danielle lived at the home for nearly five years with her daughter Lei’Lani, and the two found tremendous love and support there.

After a lot of hard work, some tears and tough conversations, Danielle would eventually put herself through college, earning multiple degrees. She now gives back by working in social work.

“I'm so grateful for the safety net that I had from my maternity home,” she said. “That kept me like in a bubble wrap for almost five years while I was in that cocoon, before I became my butterfly, so that I could receive everything that I needed because my daughter wouldn't be healthy if I wasn't healthy.”

Evalynn found out she was pregnant early in 2021 with her second child out of wedlock. Even though she was living a fast life with many material trappings, she was not happy. The father wanted her to abort the baby.

She found the Women’s Center of Ohio, and the staff there waited past closing time for her to make the hour-long trip to get an ultrasound.

Seeing the five-week-old baby’s image gave her pause. Evalynn already had a young son and had two abortions prior to having him.

“And these abortions never changed anything for me,” Evalynn said. “I continued on this life of destruction and alcoholism and drugs.”

She was repeating generational patterns, she said, having been taken away from her crack-addicted mother at 10 and never knowing her father.

And so, with this pregnancy she reached a fork in the road.

“And symbolically choosing life for my child meant that I was going to choose life for myself,” she said.

Evalynn received a scholarship from the pregnancy help center and finished her bachelor’s degree in August of last year. She got married soon thereafter, gave her life to Christ, and now she considers herself a new creation.

“The world tells women that if we abort our babies, then we'll be successful,” she said. “Then we'll make it, and we're doing the right thing, and we're not going to suffer, and we can live our life selfishly.”

“And that's false,” said Evalynn. “It's not the truth. I've never lived such a fulfilled life like I do now.”

Kylie* was the mother of two in 2015 when she became pregnant early in a relationship, and thinking it wouldn’t work out, she chose abortion, regretting that decision.

Later after the relationship progressed, she became pregnant again by choice, and lost the baby to miscarriage.

Devastated, the couple tried again to have a baby and conceived a son.

“When we had our son, he was welcomed with warm, loving arms,” she said. “Everybody just adored our rainbow baby. And everyone was so happy for us.”

The seven months later they were pregnant again, but this time the reaction from their family and friends was the exact opposite.

Even though she had three kids, she was completely independent and never needed help from either family or friends, she said, so it was frightening for her to see this reaction of non-support.

“We were scared,” said Kylie. “We didn't know what to do. We didn't even know why we were getting this reception from them.”

When Kylie went to the Real Options pregnancy help center for counseling, she experienced something quite different in the response.

“From the moment we walked through the door, we just were welcomed and embraced with warm, loving open arms,” she said. “And I felt empowered. I felt like they informed me of all my choices.”

And through all this Kylie and her partner chose life.

Then they found out that they were pregnant with twins, so fear again became a factor.

“It was like, ‘Oh my God, I went from being a mother of three, now I'm going to be the mother of five,’” said Kylie.

Kylie questioned how she would do it and felt overwhelmed.

“But they were there every step of the way,” she said of Real Options.

About three months into the pregnancy, she lost one of her babies to miscarriage, and it was again a. devastating loss

“But again, they were there every step of the way,” Kylie said of the center. “So now I've got my beautiful baby.”

“My daughter's a year-and-a-half and I'm still in constant contact with Real Options,” she said.

They exchange calls regularly, the center checking in on her, asking if there is anything she and baby Zoe might need.

“And it's genuine love that I get from them,” said Kylie.

Moms and babies go to Congress

The three moms met with congressional staff representing their individual states on Jan. 19, sharing their experiences, illustrating the benefit of pregnancy help organizations.

There was much preparation put into the moms traveling from Texas, Ohio, and Virginia with their children to convey this message on Capitol Hill, and the thought can be daunting at first.

But the moms were courageous in putting themselves out there for the Babies Go to Congress meetings.

After the morning on the Hill, the moms and their children, their accompanying center staff, gathered along with Heartbeat International representatives to debrief. The moms were asked what surprised them the most about the experience talking with legislative personnel.

Danielle said she was taken aback by the fact she could be so open and honest about how the Lord has moved in her life through her experience with pregnancy help.

“I knew that the way that I conceived my child was not biblically correct and was not aligned with how I was taught or my foundations in the church,” Danielle said. “But I knew that God gives life, and every life has a purpose.”

“Paul Stefan, who was an actual child, his life has so much purpose,” she said.

“He lived for 42 minutes and then went to be with the Lord.,” said Danielle. “And because of his short, impactful life, I had an opportunity to live at a maternity home that saved my life and allowed me an opportunity to breathe life into this precious little girl.”

Kylie said she initially had anxiety about speaking in front of Congressional staffers, because public speaking has never been something she wanted to do.

“What surprised me most, I would say, was just how warm and welcoming everybody has been,” she said. “Everyone that we encountered has been warm and welcoming. I thought that I would be a big ball of anxiety, but it wasn't like that at all. So, I really appreciated that.”

Kylie said she thanks God for everyone who supports the pregnancy help movement, and also that it’s important to raise awareness about the resources available to women, recalling that she found out about Real Options by word of mouth.

“I didn't know that there was really somewhere I could go to that would support me,” she said.

Kylie recalled that she did not expect to hear, “What do you need? What makes you feel like you have to have an abortion? Let's eliminate those things.”

“And that's what we need to get out there,” she said, “that if you are having an abortion because you feel like you can't support this baby, let's show you how you can.”

Evalynn remarked about the need to educate lawmakers, pro-life or not, about how pregnancy help organizations fill in the gaps for moms in need.

“Only God can put a love in a man's heart like that,” she said. “And for a woman who has a past like mine, only God could do that. And so had I not come in contact with these women's centers, I probably would be dead somewhere living the life that I was living. So, I'm thankful and I'm here to boldly share my testimony.”

Tweet This: Three moms & their children met with Congressional offices to talk about pregnancy help via Heartbeat International's Babies Go to Congress

Heartbeat International President Jor-El Godsey said it was a tremendous opportunity to take the moms and their children to meet with lawmakers and their staff, because these moms are bringing real-life stories as constituents to Members of Congress.

Not all the Congress Members on the most recent schedule were pro-life. Still, in the cases where they were not, Heartbeat and the moms offered information on pregnancy help, answered questions, and planted seeds.

The 2023 March was the first since the U.S. Supreme Court overturned Roe v. Wade in the Dobbs v. Jackson Women’s Health Organization ruling last June. The theme for the first March following Dobbs was “Next Steps: Marching into a Post-Roe America.” The reversal of Roe has served to underscore the ongoing need for pregnancy help.

Editor's Note: Kylie's name has been changed at her request.