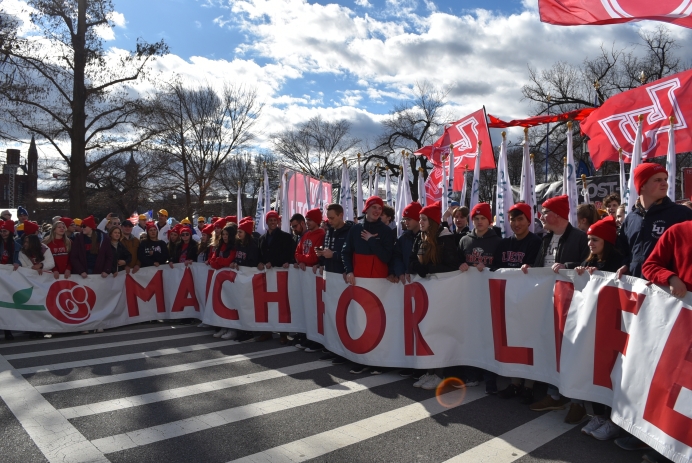 The 2023 March for Life about to kick off Lisa Bourne

(Daily Wire) Pro-life activists, students, and organizations will gather in Washington, D.C., on Friday for the annual March for Life for the first time since the Supreme Court’s historic decision to strike down Roe v. Wade.

The gathering comes just days before the 50th anniversary of Roe, in which the Supreme Court declared a constitutional right to abortion. With Roe gone, pro-life groups and legislators now see an opportunity to expand protections for life even as deep blue states further entrench abortion in their own state laws and constitutions.

“The pro-life movement has just experienced a major victory in the fall of Roe v. Wade, but our work to build a culture of life is far from complete. This year’s march will reflect upon the Dobbs decision as a critical — and celebratory — milestone but will also be a time to look forward to the next steps, such as the need to continue marching annually in Washington, D.C., as well as expanding marches in the states, to advance legal protections for the unborn,” March for Life President Jeanne Mancini said in a statement obtained by the Daily Wire.

Mancini added that the next steps for pro-lifers included supporting maternity homes and pregnancy resource centers for women in need of assistance.

One such group that serves pregnancy centers in the U.S. and around the world is Heartbeat International, a network of pregnancy resource centers with over 3,000 affiliates. The group, which received a surge of phone calls in the months following the leak of the Dobbs draft decision, argued that the end of Roe is only the beginning of the pro-life movement.

“The mission has not changed for us or our centers at all. What we have seen is this shift, primarily to the growth of the abortion pill,” Andrea Trudden, communications director for Heartbeat International, told the Daily Wire in an interview. Heartbeat International manages the Abortion Pill Rescue Network, a group that provides resources to help reverse pill abortions.

Medication abortions, which now account for over 50% of all abortions according to some estimates, are only expected to increase, especially with the FDA’s removal of abortion pill restrictions under President Joe Biden.

One reason is that abortion pills, which can be mailed, are seen as a potential way for those seeking abortions to bypass state laws. In Texas, some estimates show abortions down as much as 99% post-Dobbs, though activist groups are still concerned about the prevalence of the abortion pill.

Trudden said that the rise of the abortion pill narrows the window of preventing abortions, meaning that they need to be “faster” in responding to needs and providing care. She said that Heartbeat International would be working to provide more comprehensive care to women and increase the technological reach of the organization.

“As we continue to follow what the abortion side is doing, we do need to, and are planning to, adapt a little bit more as well,” Trudden said. “We are working with technology to be able to provide similar care [remotely] as to what she would receive inside a center as well.”

Tweet This: The mission has not changed at all for pregnancy help centers since Dobbs. What has shifted is the growth of the abortion pill.

While the work of pro-life organizations remains very much the same in terms of providing resources and care to women, pro-abortion and pro-life legislators have taken opposite paths to approach the post-Roe legal world.

While some action at the congressional level has been attempted, most of the legal battles will likely be at the state level thanks to the Supreme Court.

States like California, Vermont, and Michigan have all put abortion into their state constitutions while broad abortion bans have gone into effect in states like Alabama and Tennessee. In Kansas, a pro-life amendment failed at the ballot box in August, leading many pro-abortion advocates to declare that the Dobbs decision would be a hindrance to Republicans and the future of pro-life legislation.

State abortion bans are challenged by the overwhelming number of corporations and even cities that have offered or want to provide funding for women to travel out of state to get an abortion. Additionally, despite the Supreme Court’s decision, lower courts have still proved to be a problem for pro-life laws in states like South Carolina, Georgia, and Arizona.

Tennessee’s ban, which was triggered by the Dobbs decision, is already facing potential challenges, even though the state is overwhelmingly Republican. The upcoming legislative session is expected to debate adding exceptions to the law, with some Republicans arguing that exceptions for rape and incest should be added.

While legal questions remain, pro-lifers remain steadfast in their beliefs and continue to march. Noah Collazo, a Liberty University freshman, is joining about 500 other students and Morse Tan, the dean of Liberty University School of Law and former U.S. Ambassador at Large for Global Criminal Justice, in marching in D.C.

“We’re about to head to Washington, D.C., to stand for pro-life and for the legislators there who are standing for freedom and for the protection of the unborn,” Collazo said in a statement to the Daily Wire before getting on a bus to head to the march. “It’s definitely cool seeing all these people so early in the morning — so many of us showing up to stand for what we believe in.”

Editor's note: This article was published by the Daily Wire and is reprinted with permission. Heartbeat International manages the Abortion Pill Rescue® Network (APRN) and Pregnancy Help News.