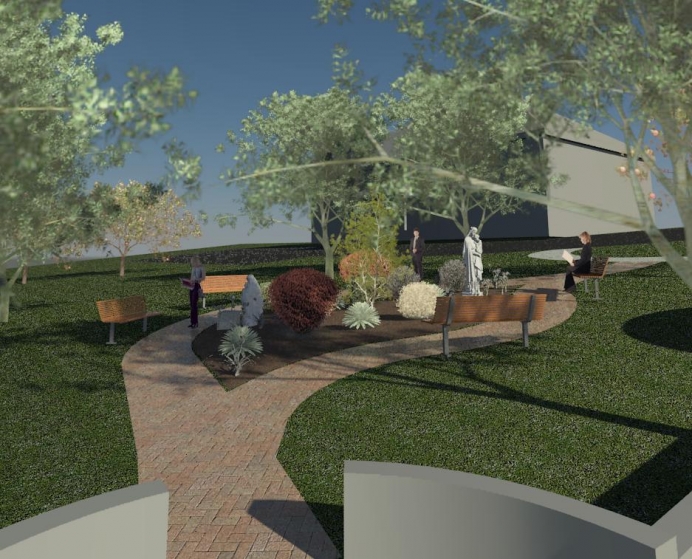 Start with sorrow, finish with joy.

That’s a motto Jakki Jeffs said she hopes visitors to a new garden will take to heart.

Jeffs, the president of Ontario, Canada-based Guelph & Area Right To Life, has announced the group’s ambition to raise funds for a “Garden of Grace,” which would be constructed on the grounds of The Basilica of Our Lady Immaculate in Guelph.

The 50-foot-by-40-foot garden will feature private spaces for prayer and reflection. Statues of Jesus and an angel in grief over a crib, constructed by artist Timothy Schmaltz, will dot the landscape.

Visitors will start on a pathway with flowers recognized as being connected with sorrow. Gradually, the walker will be surrounded by flowers inspiring hope and joy.

“We want the garden to be a Good Friday, Easter Sunday experience,” she added. “You enter carrying your pain and hopefully there will be less of it when you leave.”

The site—intended for parents and families whose babies died in the womb—will serve as a place of remembrance, Jeffs said.

The idea began to take shape a year ago, and Guelph Right To Life launched a crowdfunding campaign Jan. 29 that seeks to raise $45,000 at YouCaring.com by March 4.

“Crowdfunding entails the principle of getting people to come together to donate. Mostly, lots of small amounts and we use an online platform for one cause,” the group’s program manager, Hanna Barlow, said.

Jeffs says the idea has been “God-inspired,” a conviction that was affirmed when she contacted the Schmaltz gallery. That gallery had created, among other projects, a Visitation sculpture that featured both Elizabeth and Mary pregnant. She called Schmaltz’s company later to see if they had statues that dovetailed with her healing-based goals.

“They told me they were busy because the gallery was featuring two new sculptures,” Jeffs said.

One of the statues was a Jesus statue titled, “I Knew You In The Womb.” The architect and his wife had lost a child through miscarriage and he was inspired to create a work. Later, Schmaltz thought of mothers who lost their babies through abortion, leading to his creation of the angel statue the group plans to incorporate in the garden.

“His company told me, ‘We have two statues that are perfect for what you are asking for,’” Jeffs said, adding that future plans for the garden include hosting retreats and facilitating pilgrimages.

“Our vision is to create a place where parents can go to remember, to find comfort, and to heal,” Jeffs said. “We hope it will be a great source of comfort for all, especially post-abortive women.

“Where do you go to talk about this issue?” she asked. “We aren’t even supposed to talk about abortion. It appears to be considered a necessary evil in society but no one wants to hear about abortion grief or the grief of miscarriage especially if your little one was tiny. Someone has to light that candle in the darkness and all families need to see it.”

Since the bodies of aborted children under 20 weeks are known to have been incinerated in hospital waste, Jeffs pointed out, there is no body, no grave and nowhere to remember them.

“We want to give these families a place to remember their child. Their grief is so real and raw," local pro-life presenter Debbie Fisher, said, pointing out the need for a dedicated healing space.

Tweet This: We want to give these families a place to remember their child.

"There are very few places for those of us who have suffered abortion to go to,” Fisher said. “Many of us suffer in silence. This garden will become a place for rebirth and a space for healing."

For more information, visit the organization’s crowdfunding page at www.YouCaring.com/GardenOfGrace.

Has your organization experimented with crowdfunding? Let us know in the comments or send us your story here.