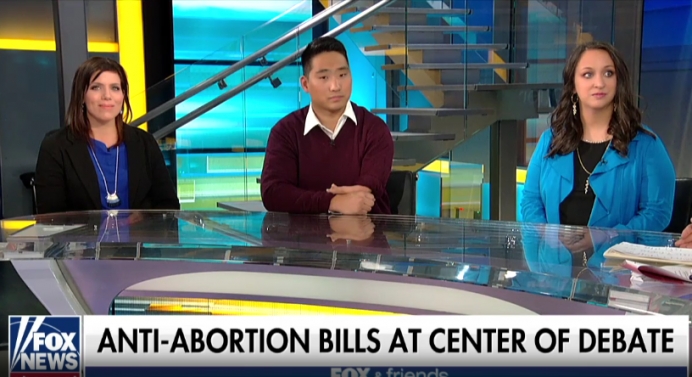 WATCH: Abortion Survivors Speak Out: "This Is a Human Rights Issue.”

Last month, abortion advocates reinvigorated the abortion debate by introducing a spate of extreme late-term abortion laws in states across the country. Now, as the debate rages on, abortion survivors are speaking out.

"This is a human rights issue," said Melissa Ohden, founder of the Abortion Survivors Network. "Without the right to life, there is no other right that comes."

After surviving a saline-infusion abortion in 1977, Ohden was adopted despite the diagnosis that she might not live long or would face multiple disabilities.

"This is what love does," she said on the power of adoption. "It saves lives. It brings us to life."

Fellow survivors Josiah Pressley and Claire Culwell were also blessed through adoption after attempts to abort them failed. Pressley believes the failed curettage abortion is the reason he is missing a limb.

"A curettage abortion is a type of abortion where the doctor goes into the mother's womb and basically rips the baby apart and brings them out in pieces, and that's actually why we think that I'm probably missing an arm today," he said. "So, she had the procedure at two months and then at five months realized that I was still alive. That the abortion failed."

Culwell, whose twin was aborted in a D & C abortion at 5 months, says that their experiences should raise important questions for the country.

"It's shocking to me that people no longer in our country care about what is true and right," Culwell said. "We know that a baby is what is inside a mother's womb based on medical technology and science. We just hope that because people can see our faces and see that we are people. We are human. We do grow up to be someone someday, that people will realize that those women do not speak for women like me. That's why I would ask those people, 'Where were my rights as a woman? What were my rights in the womb?'"

Acknowledging the challenges that come with an unexpected pregnancy, Ohden urged women to find support in their local communities.

"So many women are forced, coerced, forced, don't know what resources exist in their communities, maybe you're completely unsupported so I want women to know there are resources in every community. They can always contact any of us," she said. "You're never alone."

In fact, more than 2,700 pregnancy help centers exist all across the U.S., providing hope and compassion to women in distress. In 2017, U.S. pregnancy centers served nearly 2 million people in the United States with free services, including pregnancy tests, ultrasound scans, material resources (such as diapers and baby clothes), and educational classes for parents.

Some even offer Abortion Pill Reversal, a safe and effective protocol which has lead to the births of more than 500 babies since 2007.

Along with these life-affirming services, organizations often offer abortion recovery programs to facilitate healing for women and men who have experienced abortions. In 2017 alone, 24,100 clients sought after-abortion support at a pro-life pregnancy help center in the U.S.

For the three abortion survivors, this kind of forgiveness has been a major part of their own stories.

"All three of us have forgiven our birth mothers," Culwell said. "Because we know that they had no idea what they were getting into when they had an abortion.”