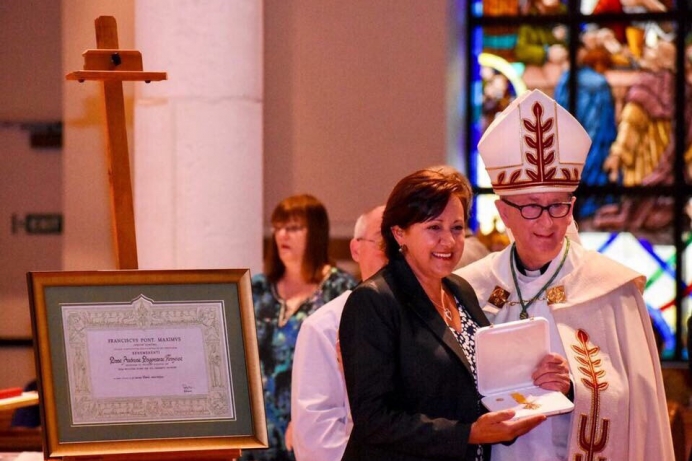 During a November 4, 2018 prayer service at Mary Queen of the Universe Catholic Church, celebrating the Diocese of Orlando’s 50th Anniversary Jubilee, Andrea Krazeise, Executive Director of The Pregnancy Center of Sanford & Oviedo, found herself accepting a medal and a document signed and sealed by Pope Francis.

One of only four individuals honored that day with this Benemerenti (“Well-Deserved”) award, Krazeise was recognized for having “contributed to the fulfillment of the Church’s mission and the betterment of society."

Her nomination for the award came from Father David Scotchie of Most Precious Blood Catholic Church in Oviedo, Florida. Scotchie had been impressed with Krazeise’s work since learning of it through Wendy Sutch, a parishioner who is also on the center’s board of directors.

“Her work with The Pregnancy Center is inspiring no matter what your faith is,” Scotchie said. “She is celebrating life and welcoming it and helping mothers—and men, too—claim that gift. She's a force of nature, changing lives and letting her own be changed. Everything she does is done out of faith and prayer.”

Scotchie also admired her drive to build partnerships with various churches, and to create a model for pregnancy centers throughout Florida. But Krazeise and her center have impacted people even outside the country, he said. “Their mission is always outward,” he said. “They tithe 10 percent of their income, and in association with Beautiful Feet International they have helped start 33 pregnancy centers overseas.”

Stunned by the Pope’s award, Krazeise could only express gratitude and surprise. “To highlight our ministry in such a way before all of these leaders and dignitaries of the Catholic Church... It was an incredible opportunity and honor and privilege,” she said. “I couldn't believe they chose me.”

Yet while her name was the only one on the award, Krazeise pointed out, “This ministry is not a one-woman operation. So I share the award with my staff and my board. I might be the figurehead, but we received this.”

Krazeise, an active member of the Reformed congregation at St. Andrew’s Chapel, described herself as initially “pretty lukewarm” on the issue of abortion. That all changed in 1997, when a Bible study on the woman in Proverbs 31 compelled her to find out how God wanted her to “extend her hand to the needy.” Inescapably, she was driven to help women considering abortion.

Krazeise herself had only been spared from being aborted because two women encouraged and supported her own single mother in carrying her to term. Yet this was the first time she had considered how many women faced similar circumstances—and the horrible repercussions of choosing a different outcome.

“Truth be known, I never gave [abortion] much thought until that day,” she wrote in her memoir, He Came Back for Me. With all the energy which had once propelled her to leadership in the banking world, Krazeise dove into researching the need she could no longer ignore. That drove her to accept a calling she could not refuse: to stand “on the front lines in the war against abortion.”

First, she trained as a counselor on an “abortion hotline,” talking with 10-15 women per 24-hour shift, informing them of their options, and directing them to area pregnancy centers for more help. Yet all those calls revealed another huge need: “I became painfully aware that there wasn’t a pregnancy center in my own town,” she wrote. “Someone needed to start a CPC in Sanford.”

Yet Krazeise did not set out to create the kind of ministry The Pregnancy Center of Sanford & Oviedo has become.

“Back then I was thinking, ‘Lord, if you can use me and this center to save one child, I would feel like I have completed my job,’” she said. “If everything we are doing saves one baby, it's worth all the effort."

Tweet This: “If everything we are doing saves one baby, it's worth all the effort." - Andrea Krazeise @kinglewrites

So in 1998 Krazeise founded a pregnancy center in a 1000-square-foot cottage in Sanford, Florida. Seven years later, the center doubled its space, hoping to better reach all the women of Seminole County. In another five years, the center opened an Oviedo satellite office 12 miles away near the University of Central Florida, one of the largest colleges in the United States.

Within the last four years, both offices have gone medical under the supervision of Lisa Pharoah-Gaton, nurse manager and sonographer. Pharoah-Gaton came to the center from Winnie Palmer Hospital for Women and Babies, bringing 20 years of expertise in both Labor and Delivery and Post-Anesthesia Care units.

If It’s Monday, This Must be Apopka

Next came the most multiplicative expansion of all. In August, the center launched the first Save the Storks mobile unit in central Florida, equipping the center’s staff to serve women in four entirely new locations.

“I'm so excited about having this mobile unit,” Krazeise said. “It almost feels like we've opened four new centers because of where it's allowing us to go. It's like a pregnancy center on wheels, like four centers in four communities.”

In November and December, the mobile Pregnancy and Ultrasound Lab—nicknamed PAUL, in honor of late board member Paul S. West—began making test runs, beginning with nearby Apopka.

“Apopka has a little pregnancy center there, but they're not medical,” Krazeise said. “So the first thing was to go help them, because they have a lot of potential clients. We're in a church parking lot near their pregnancy center.”

“I look at the mobile unit as the emergency room,” she said. “What we’re doing is stopping the bleeding out there. Then we re-direct a woman to a pregnancy center near her home.”

After Mondays in Apopka, PAUL will spend Tuesdays in the Community United Methodist Church parking lot, located on the main drag in Casselberry. On Wednesdays, the mobile unit will reach out to Lake Mary residents, including students at Seminole State College. Thursdays will find PAUL parked at the University Carillon Methodist Church near the University of Central Florida.

The two-month soft launch of its mobile services helped The Pregnancy Center staff to “work out all the little kinks and glitches,” Krazeise said. “It's all about understanding the traffic patterns, the people in that community, and the churches, figuring out where's the best place to park it.”

So far, drivers passing the vivid blue-and-yellow Mercedes-Benz Sprinter van, or “Stork Bus” as Krazeise calls it, have greeted it with friendly toots on their horns and thumbs-up signs. The staff has given tours to churches and other groups, and even to one self-described “women’s march participant” who questioned their work.

“To her surprise, I think, we invited her inside the mobile unit and told her what we do,” Krazeise said. “We're here to provide alternatives and to inform women of all their options, and we think by offering a sonogram and educating them that would be great. She left somewhat satisfied, though I don’t think she was ready to partner with us.”

Partners Have Made Ministry Possible

From its earliest days, The Pregnancy Center has depended on partnerships with generous donors and fervent supporters.

“We've got a few key churches that have been very instrumental in all of our progress,” Krazeise said. “The strongest has been St. Andrew's Chapel, which was led by the late R.C. Sproul. All along the way, he was definitely my champion. He made it very clear what every Christian's role was in the abortion issue: that we're called to defend and protect the unborn, and to put our money where our mouth is.”

The Catholic community also played a formative role in The Pregnancy Center’s history. Long before the recent Benemerenti award gave the center what Scotchie called “Catholic cred,” another priest named Father Al Fornace joined the first board of directors and personally purchased the original office.

Krazeise said the late “Father Al” became a priest at 75, after years as a cardiologist and vocal abortion protester. “I describe him as my Apostle Paul, because he showed me how to do pro-life work in an excellent way,” she said.

What would her Apostle Paul think about PAUL, the state-of-the-art mobile unit? And about the papal award recognizing the center’s excellence? Krazeise said she and her staff have found themselves saying yet again, “Father Al would be so proud.”