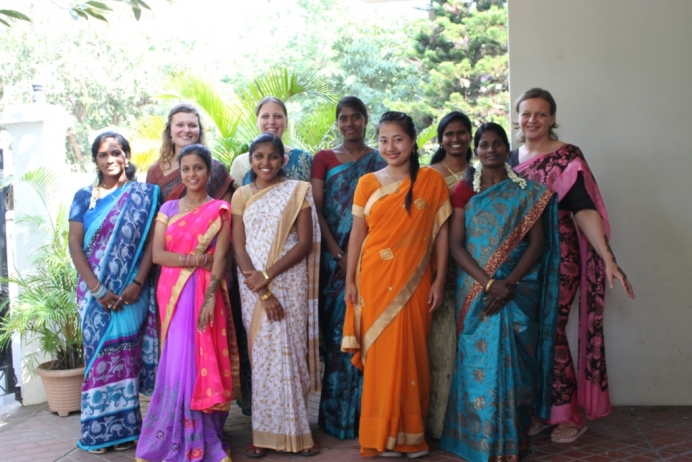 Life for All staff and Life Center clients Johanna Durairaj

New effort for helping women in India. Will you pray for them?

Pregnancy Help News articles are written to inform, inspire and encourage our readers. This one contains an added plea.

We need to assemble an army of prayer warriors to intercede on behalf of the people of India as well as those who are ministering to them. Will you consider joining the effort?

Last week PHN reported on a summit held by a pro-life non-profit in India with mention of the unique issues they are facing regarding vanishing girls and the sexual abuse of women and children. Words are inadequate to describe the depth of this, but perhaps we can scratch the surface.

Johanna and Simon Durairaj founded Life for All in 2009. Through the organization they seek to be a voice for the voiceless in India. I spoke on the phone with Johanna Durairaj and found myself weeping and praying for hours after our discussion.

The most accurate word which describes the condition of the culture as well as social and governing systems in India would be misogynistic. The word misogynist is defined as a person who hates or discriminates against women. This is the persona of the nation.

In the U.S., the word is so over-used and lightly applied that it demonstrates our lack of understanding of this powerfully destructive word. Durairaj understands this is the heart of the issue of India’s culture. As a result, she seeks to minister to both men and women in a Christ-like manner through truth and love.

It is tempting to see the battle in terms of men versus women rather than looking deeper into the spiritual battle which is where it must be fought. Even in an email the next day, I could still hear Durairaj’s focus and her trust placed firmly on God.

She wrote, “Thank you for your tears and prayers for the women and children of India. They need them, they deserve them... the battle is huge...but it is His. The victories and defeats are His. With so many needs around, the danger of burnout is imminent. Please also pray for us, that we would be wise in how to go forward.”

The modern-day gendercide of India is utilizing ultrasound and then aborting the child if the sonogram indicates the baby is female. Between 15-20 percent of the 15.6 million abortions in India per year are specifically targeting the female sex.

Perhaps this is considered more humane than previous practices of using a rice husk inserted in the baby’s mouth (it is very sharp and will slice open the esophagus) or poisoning the baby with cactus milk. Or even drowning her in a huge pot of milk. Often the mother-in-law would be the one to kill the infant. These rituals were conducted with those gathered saying, “next time come back as a boy.”

There is pressure to abandon these horrendous rituals. Now it is more common to wrap the newly born baby girl in towels causing her to become ill and die. Technically it is illegal to seek an abortion only based on gender, so if you are too poor to bribe the doctor then infanticide is the alternative.

The end results of gendercide, whether the baby is pre-born or an infant, are the same. Currently there are between 54 and 55 million more males in India than females.

Durairaj explained, “It is said, ‘When you have a daughter you are watering someone else’s garden.’ A girl goes from being her father’s property to ending up as her husband’s. The dowry system is expensive and perhaps a family will have one daughter, but more than that is seen as a burden.”

With the reduction of females available to wed, there has been the practice of bride snatching, bride trafficking and sometimes one woman is forced to marry multiple brothers in one household. The demographic imbalance so far has not seemed to lead to a correction within the culture as you would expect.

“According to the Hindu faith (the largest religion in India), a woman cannot gain salvation. Her only hope is to be reborn as a man. There is no hope for a woman,” said Durairaj.

This hopeless atmosphere leaves the hearts of the women Life for All ministers to so open to hearing the hope of the good news as their kindness toward these women opens up immense opportunities. Consider how priceless it would be to hear about the God who created you and loves you as a precious daughter so much that He was willing to sacrifice His Son to save you.

Tweet This: How priceless would it be to hear of the God who created you & loves you as a precious daughter so much He sacrificed His Son to save you?

The Life for All center is located near a village and whenever a girl is born, the staff celebrates the birth with the family. This celebration would speak volumes to the mother as well as women and girls who witness this because usually a mother would mourn the birth of a daughter and only celebrate the birth of a son.

There was an infanticide bill enacted in the 1980s in India with the thinking that if people were simply educated things would change. Even with the government offering incentives such as scholarships for girls, this has not brought about a discernible difference.

In 2018 Reuters examined the risk factors for women around the world and found India to be the most dangerous country for women due to sexual violence and the practice of forced slave labor.

According to a 2017 World Vision survey, one out of every two children in India are victimized by sexual abuse. Again, this is why Life for All seeks to give a voice to the voiceless. This abuse continues because victims have remained silent out of fear.

Durairaj says that most women that come to their center are rape victims. While the country has taken on western thought in regard to sexuality, it has not changed the stigma connected with being an unwed mother. This led the pregnancy help center to open a maternity home/Life Center, because it is not safe for unwed mothers to live alone.

If you visit the Life for All website, you will see they reach out to the community regarding the effects of pornography. They offer seminars in the community to educate people about sex trafficking and pornography. So far over 130,000 people have participated.

In the 2019 Life for All newsletter, the estimate of babies saved through the ministry’s efforts to educate would be over 35,000 children.

These seminars take a secular approach educating people from a scientific basis showing how society is adversely affected by abortion, pornography and sex trafficking.

In a September article from fightthenewdrug.org website, therapists commented on the effect of pornography on relationships.  Pornography is at the heart of the devaluing of women the way (in complete contrast) empathy is the heart of a healthy relationship between a man and woman.

So, in the midst of this darkness, Life for All presses on.

On January 24, 2021, they will launch a Pregnancy Help Line. That is the National Girl Child Day which was started in 2008 by India’s government.

Currently Life for All staff are training counselors for the hotline. They covet your prayers for this effort now, for the day of the launch and into the future.

The darkness cannot prevail against our God. Cover the Life for All ministry in prayer by praying for the Lord to protect the women and children of India that He would move in the hearts of men in India to turn from pornography and that they would learn to value God and the women and children He has created.