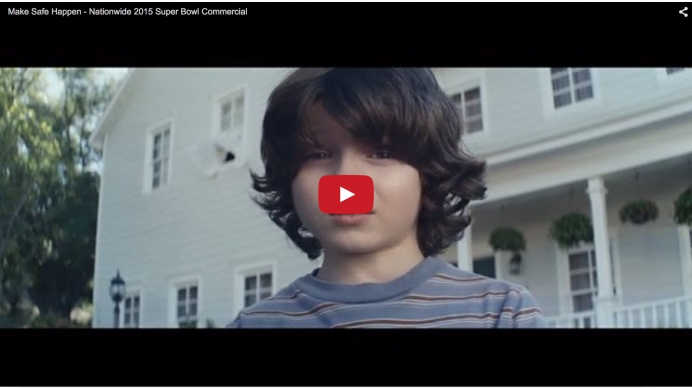 While the blogosphere and Twitter-verse experienced their predictable upheaval in the wake of Nationwide Insurance's rather weighty "Make Safe Happen" advertisement during the 2015 Super Bowl, the segment no doubt makes its point, ending with the words: "The number one cause of childhood deaths is preventable accidents."

The healthcare insurer paid roughly $4 million for its 30-second ad spot in the 2015 Super Bowl, making immediate headlines with its "what-could-have-been" approach. The ad features life events--riding a bike, getting kissed on the school bus, getting married, to name a few--one boy will never experience, because his life was cut short due to a household accident.

As the Centers for Disease Control and Prevention report, more than 9,000 children die each year in the United States from injuries, many of which are preventable. This is truly a tragic fact, one that no commercial or words or amount of money could ever hope to heal. One death--particularly preventable in nature--is far too many.

"We believe in protecting what matters most," the spot concludes, "Your kids."

Tweet This:- "We believe in protecting what matters most: your kids. #MakeSafeHappen

Regardless of anyone's thoughts on its approach, give credit to Nationwide for raising awareness to an issue that has the potential to impact every family. What an amazing victory if even one life is saved in the process. Who would argue the cost of $4 million against even one life?

(There's at least one life Focus on the Family knows about who was rescued by it's "controversial" Tim Tebow ad in the 2010 Super Bowl. Click here for more.)

Tweet This: The fact is, 3,300 "preventable" deaths are caused by abortion every day in the U.S. #MakeSafeHappen

The fact is, at 3,300 "preventable" deaths are caused by abortion every day in the U.S., abortion kills more children in any three-day stretch than the total number of children who die each year from preventable accidents. This is not to minimize the pain or loss of those 9,000 families, it's just to recognize the facts, and in the process, to recognize and repent of the cognitive disconnect involved in deciding whether or not to protect a child based on factors like size, location, environment, and degree of dependency.

Yet, Nationwide's commercial, and the buzz that follows it, presents us with an amazing opportunity to dialogue with our friends and neighbors. Each life holds so much value, so much potential, so many moments of joy, enthusiasm, discovery, and personality, that to lose even one of these precious souls is unthinkable.

The amazing thing is, we all agree on that truth. Every life has value and deserves to be protected, nurtured and cherished. This isn't something controversial, standoffish or even debatable.

It's the kind of consensus that's of the rarest kind, but when you consider an insurance agency is willing to put $4 million to tell the message, you start to realize, it's a consensus that's here to stay.

How can you use Nationwide Insurance's advertisement to spread a passion for life in your community? Let us know in the comments!