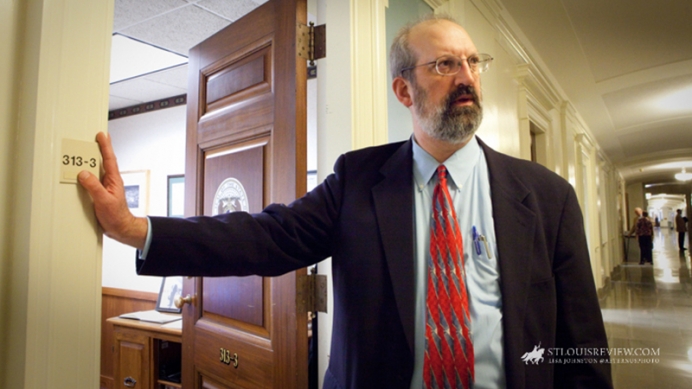 For more than thirty years, Sam Lee has lobbied the Missouri state legislature for the pro-life movement. With this latest achievement, his efforts continue to pay off. Photo: Lisa Johnston, photographer for St. Louis Review, used with permission from the Archdiocese of St. Louis

At the end of June, Missouri Governor Mike Parson signed into law the Benevolent Tax Credit, giving a substantial boost to pro-life pregnancy help organizations by renewing and increasing tax credits available to those who contribute to their work.

According to Samuel Lee, a Catholic Deacon and pro-life lobbyist for Campaign Life Missouri, the tax credits—the Maternity Home Tax Credit and the Pregnancy Resource Center Tax Credit—have been on the books for years, requiring renewed passage by the Missouri General Assembly every six. Over the last two decades, Lee says the credits have positively impacted the work of pregnancy help organizations.

“It’s an incentive and helps encourage donors,” he said. “It’s a partnership between the donor and the state. These organizations are providing true choice and real alternatives to abortion. This is close to my heart.”

For more than thirty years, Lee has lobbied the Missouri state legislature for the pro-life movement. With this latest achievement, his efforts continue to pay off.

Indeed, because of these tax credits, which apply to Missouri state income tax (personal and business), Lee said, Missouri has experienced an increase in its number of maternity homes and pregnancy centers. There are also more mobile medical units traveling the state providing free ultrasounds. Additionally, more brick-and-mortar pregnancy centers are able to purchase ultrasound machines and train medical staff in their use.

Tweet This: Because of these tax credits, Missouri has experienced an increase in its number of pregnancy help organizations. #prolife

The increase in the amount of tax credits helps to meet the rising costs associated with operating a maternity home or pregnancy center, Lee said. Fortunately, donations aren’t restricted by the law—they can be used for anything.

“It costs more to operate these organizations—a maternity home is open 24/7, for example,” he said. “Because of the overall cap (of $2.5 million), we were running out of money. We combined the different tax credits to work together—there’s strength in numbers.”

But opposition to this law, and the increase proposed this year, has been fierce.

“We’ve had to battle for some of the amendments,” Lee said. “The pro-abortion side calls pregnancy centers ‘fake clinics.’”

“They want to control speech,” he said, referring to the abortion lobby’s attempts to abridge pro-life speech.

However, he added, because two-thirds of the Senate and of the House are pro-life, and many members are familiar with the work of pregnancy centers, the opposition’s tactics failed.

This year’s bill passed a day before the legislative session ended.

Founder of a maternity home in St. Louis, Lee has conducted presentations on the unique Missouri law, and is hopeful that other states will initiate similar legislation.

“It’s rare for a state to have a similar law,” he said. “Indiana may have a maternity home tax credit, but nobody has it the way Missouri has it.”

As part of his work for Campaign Life Missouri, Lee travels, visiting different agencies and organizations.

“I ask ‘What do you need?’ In past years, they have told me, ‘We help women apply for Medicaid and there are delays.’ So we worked with our Department of Social Services to try to reduce these delays,” he said.

His organization doesn’t endorse political candidates but instead, lobbies on pro-life issues, relying on a collection of Christian groups, pro-life organizations, and other donors to support his work.

“We rely on good, generous people who believe in the work that we’re doing,” he said. “It’s work that I love, and I’m just blessed to do it.”