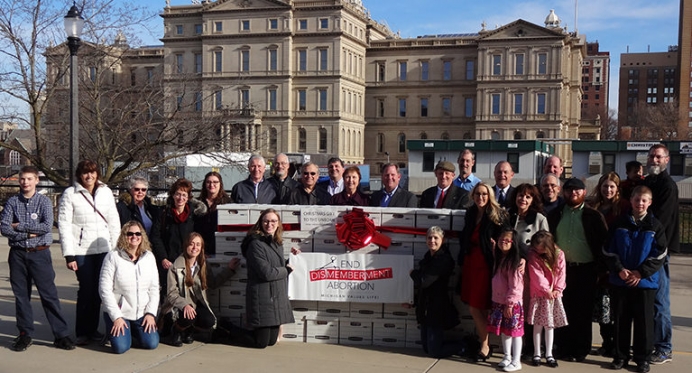 The Michigan Values Life coalition turned in 379,418 signatures to the state this past Monday, December 23, to initiate legislation to ban dismemberment abortion in Michigan.

The legal signature requirement for citizen-initiated legislation in Michigan is 340,047, based on the total votes for governor in the previous election, according to Right to Life of Michigan, which submitted the petitions to the the state Bureau of Elections along with other pro-life groups in the coalition.

If the petitions are certified as valid, the Republican-led Legislature will have 40 days to pass the initiative, WWJ Newsradio reports, and Democratic Gov. Gretchen Whitmer cannot veto it.

“This is a wonderful Christmas present to the unborn," Right to Life of Michigan President Barbara Listing said in a statement. "Michigan values life, and it’s time for an end to these violent late-term dismemberment abortions.”

There were 1,908 dismemberment, or dilation and evacuation (D&E) abortions reported to the Michigan Department of Health and Human Services, the pro-life group said, accounting for roughly 7% of all abortions performed in Michigan last year.

The Planned Parenthood-affiliated Guttmacher Institute contends that dismemberment abortion is, "a safe abortion procedure that accounts for the majority of second-trimester abortions in the United States."

Although the abortion lobby and its supporters take issue with the pro-life movement's employment of the "dismemberment abortion" moniker, the procedure itself denotes dismemberment.

In the dilation and evacuation method, the abortionist first dilates the mother's cervix, either ahead of time with medication or small sponge-like sticks, or just prior to the abortion using smooth metal rods.

After dilation, the baby and placenta are removed, using forceps or other instruments.

This removal, or evacuation, entails extracting the child in pieces. That child is alive when his or her piece-by-piece removal occurs.

"The procedure works exactly like it sounds," Right to Life Michigan's statement said, "an unborn child is dismembered and removed from her mother’s womb, one limb at a time."

Tweet This: "The procedure works exactly like it sounds; an unborn child is dismembered and removed from her mother’s womb, one limb at a time"

Republican majorities in the Michigan House and the Senate had already passed similar dismemberment abortion bans earlier this year, which Whitmer has vowed to veto.

This prompted the Michigan Values Life coalition to act.

Lawmakers are expected to approve the citizen-initiated bill, but if they do not, the proposal would go to a statewide ballot in November.

While Whitmer had promised to veto the same legislation proposed by Republicans proposed as normal bills, under the Michigan constitution, her veto threat would be effectively bypassed through the initiative process.

The dismemberment ban bills include an exception if the mother’s life is in danger, the pro-life group said in its statement, "However, in published research on reasons women have abortions, the pro-abortion Alan Guttmacher Institute has stated that most late-term abortions are done for economic or social reasons."

Dismemberment abortion has been banned by 12 states, the Associated Press reports. The bans are in effect in two of the states, but they are permanently or temporarily enjoined in nine states due to legal challenges. North Dakota’s law will go into effect if a federal appeals court or the U.S. Supreme Court rules in its favor.

Right to Life Michigan has previously been successful in initiating pro-life laws four times since 1987, the AP report said.

“We set a state record for the highest signature validity rate with our 2004 petition drive to ban partial-birth abortions," Listing said. "We hope our dismemberment ban meets or exceeds that validity rate of 97 percent.”

A change in the petition law in 2018 required a change in Right to Life of Michigan’s "time-tested validation process," the pro-life group said, and so with the dismemberment abortion ban initiative, each petition received has been checked at least four times.

Should the citizen-initiated dismemberment abortion ban be enacted, Planned Parenthood and the ACLU have stated they will fight the law.