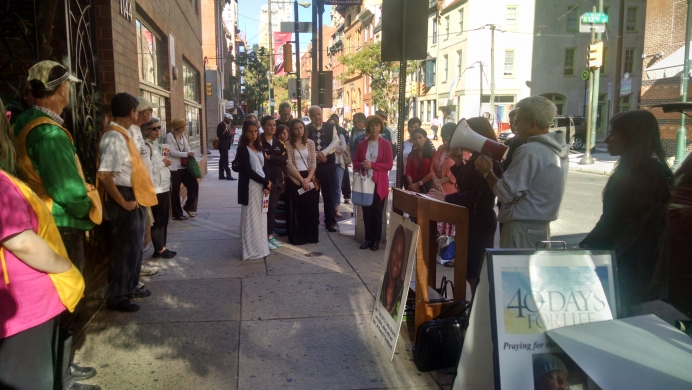 Pregnancy Center Locates a Wall Away from Gosnell's Shuttered Clinic

Six years ago this February, the Drug Enforcement Agency raided a doctor’s office at 3801 Lancaster in West Philadelphia.

Expecting to uncover a “pill mill”, investigators got much more than they bargained for and found what one would later describe as a “House of Horrors.”

Their discoveries would eventually lead to convictions relating to the illegal sale of prescription medicines and three counts of first-degree murder (three infants who were born alive during late-term abortions and then murdered)  and one count of manslaughter (for the death of patient who died of complications after an abortion) for Kermit Gosnell, a late-term abortionist once known in his neighborhood as “The Good Doctor” who is now serving a life sentence without the possibility of parole.

The story of Gosnell’s misdeeds over a 30-year period at his Women’s Medical Society is being brought to new audiences, thanks to “3801 Lancaster: American Tragedy,” a full-length documentary featuring interviews with Gosnell, the investigators and jurors.

A follow-up to “3801 Lancaster,” a 2013 brief documentary that won “Best Short Film” at the Justice Film Festival, the new documentary is scheduled for showings across the nation through early winter and will be screened privately in homes, churches and community centers.

While the newly released documentary, along with a forthcoming dramatic portrayal—“Gosnell Movie: America’s Biggest Serial Killer”—is bringing much-needed attention to a story that demands to be told, the videos aren’t the only pro-life efforts underway in the wake of the Kermit Gosnell story.

In fact, the beginning of a new chapter to the story has already begun. And it’s happening literally on the other side of the wall from Gosnell’s now-shuttered clinic, where a pregnancy help center is poised to set up shop in the near future.

A New Chapter in the Philadelphia Story

AlphaCare (formerly Alpha Pregnancy Services), which has served women in Philadelphia since 1981, is relocating its services to 3807 and 3809 Lancaster Avenue—the former of which shares a wall with the clinic Gosnell occupied from late 1979 to early 2010.

The immediate goal is to move into the new facilities in the summer of 2016, but Karen Hess and Kim Bennett, the organization’s executive director and program director, respectively, won’t consider their vision to have come full circle until Alpha expands to 3801-05 Lancaster Avenue, the multi-unit office formerly occupied by Kermit Gosnell and his staff.

At Heartbeat International’s Annual Conference in 2011, Hess, Bennett and a handful of their key staff and board members watched “3801 Lancaster” for the first time. Immediately, Bennett—who has served with Alpha for 30 years—envisioned a goal the organization has chased ever since.

“We were all gathered there,” Bennett, a registered nurse, said. “I just said, ‘We have to turn this thing around. We need to get that and turn it into a…’ I could hardly get the words out, but it was a pregnancy center. We wanted [the abortion facility] to be the exact opposite of what it was before and the story to have a new ending.”

Even though it felt like a far-fetched plan at first—and in fact, obtaining the actual property at 3801 Lancaster Ave has eluded Alpha so far—Hess and Bennett were determined to follow through and pray that, if God wanted them to serve the community Gosnell affected for so many years, He would send them there despite the obstacles.

In order to enlist supporters and friends to pray along with them, Hess and Bennett bought and handed out a small batch of tiles as prayer reminders with “3801” and “Isaiah 61,” written on each—the latter referencing God’s promise to give “beauty instead of ashes.”

Two years into their journey, at the 2013 Heartbeat International Annual Conference, Hess and Bennett listened as David Bereit, founder of 40 Days for Life, told the story of a former abortion facility in Grand Rapids, Mich., that became the new home for LIFE International in 2004.

“When innocent blood is shed, it desecrates the land where it happens,” Hess said. “We are not going to really see redemption, revival and just—eradication—of this abortion industry until we start paying more attention to those weightier spiritual topics. Those just aren’t talked about on Sunday mornings.”

A growing trend in the pregnancy help community, former abortion clinics are now centers of life-affirming help in Bryan, Texas, and Miami, Fla. The National Memorial for the Unborn in Chattanooga, Tenn., also runs its ministry on the site of a clinic that carried out abortions for 18 years.

While they’re in the process of working through building permits, renovations, and other logistics for the move, Alpha is building relationships with the neighbors and churches near its new location. They are discussing the idea of incorporating a memorial garden into AlphaCare’s abortion recovery ministry.

“There is a darkness in what took place in that neighborhood and the impact of that business in that corner of the city,” Bennett, who had an abortion herself in 1976, said. “To be able to go in there and begin to redeem it, even from our two row homes, is huge. It’s huge to be able to be a light in an area where there was so much darkness.”

For Hess and Bennett, their shared vision of restoration in the community has translated to the name, “The Redemption Project,” which is uniting the local pro-life community in a common mission.

“One of our board members said, ‘If this was really God’s direction, we would just have to follow the breadcrumb trail,’” Hess said. “From when the story broke and we really started praying, fasting, reflecting, and testing the waters, it’s continued to pick up momentum. Kim and I get frustrated that it’s taking so long. In jest I often say, ‘Really Lord, we don’t want bread crumbs, we want croutons.’ But we’ve got enough to keep us busy right now.”