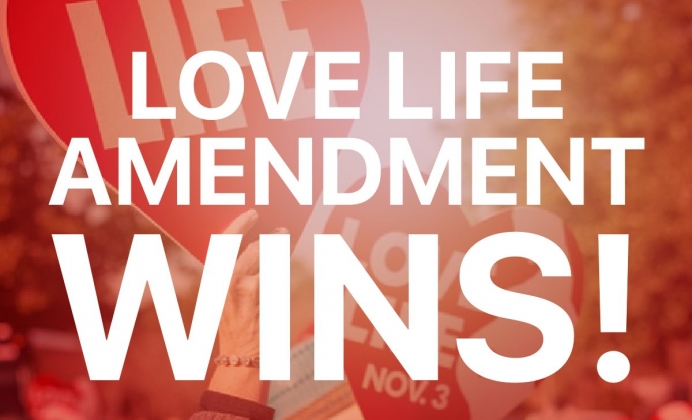 The 2020 U.S. presidential election results remained up in the air Wednesday after returns in several states are still pending.

A record number of Americans turned out for early voting after months of civil unrest and a nation financially and psychologically battered from widespread coronavirus lockdowns and restrictions.

As votes continue to be counted nationally regarding the presidential race, Louisiana voters approved a constitutional amendment to prevent Louisiana’s courts from finding a “right to abortion,” or to public abortion funding, in the state’s constitution. The amendment, also referred to as the "Love Life Amendment" was authored by State Senator Katrina Jackson, a pro-life Democrat, and was co-sponsored by dozens from both parties.

Amendment 1 passed 64%-36%, with 96% of precincts reporting, according to the Associated Press. Pro-life and pregnancy help leaders celebrated the win.

Tweet This: "This is the kind of common-sense policies that all but radical advocates for Big Abortion can support." - @HeartbeatIntl pres @jorelg

"While the specter of Roe v Wade looms large over states choosing to protect life, we celebrate the pro-life win in Louisiana declaring abortion is not a right that should overshadow the right to life," said Jor-El Godsey, president of Heartbeat International. "This is the kind of common-sense policies that all but radical advocates for Big Abortion can support."

Yesterday, pro-life Louisiana voted to pass the "Love Life" Amendment, ensuring there is no right to abortion in the Louisiana constitution.

This landslide vote is a major #prolifewin and shows the power of the bipartisan pro-life movement in Louisiana! pic.twitter.com/UxpYiFs9rj

?THANK YOU LOUISIANA? for showing your overwhelming ❤️ love ❤️ for life by voting YES on Amendment #1, the Love Life Amendment protecting babies & their mothers. ??

WE ARE OVER 1 MILLION LOUISIANA VOTES FOR LIFE!

BREAKING: @AP reports that Louisiana has passed Amendment 1, which establishes there is no constitutional right to an abortion. pic.twitter.com/JRaECGhLhe

It can still be several days before the results of the presidential election is announced. National polls had Biden ahead for weeks before tightening leading up to Election Day.

Pro-life supporters had been behind Trump, with his noted pro-life record, which has included among other things re-instating and expanding the “Mexico City Policy,” cutting taxpayer funding for abortion under the Title X program, giving states the option to withhold Medicaid and other federal money from organizations that perform abortions, appointing pro-life justices to the Supreme Court and nearly 200 conservative judges to the Circuit and District courts, creating a new office for Conscience and Religious Freedom, and ending the Obama-era mandates forcing employers to cover abortion-inducing drugs in their health insurance plans. Trump also signed an executive order to ensure that babies who are born alive during an abortion receive proper medical care. Because of his record he’d earned the reputation of being the most pro-life president in history.

Pro-life advocates and conservatives were especially heartened by the recent Supreme Court appointment of Amy Coney Barrett, mother of seven noted for her faith, and Constitutional originalist with sterling credentials. The addition of Barrett bolstered hopes for an overturning of Roe v. Wade.
Supreme Court picks are particularly key, given it was one SCOTUS vote that saved pregnancy help organizations from being compelled to promote abortion in the 2018 NIFLA v. Becerra decision.

By contrast, the Biden-Harris ticket had garnered the title of the most pro-abortion ticket in U.S. history.

The Democratic Party and its 2020 platform are rabidly pro-abortion, pushing for the repeal of the Mexico City Policy and the Hyde Amendment, “strongly and unequivocally support[ing] Roe v. Wade,” pursuing embryonic stem cell research and advocating the belief that abortion is a constitutional “right.”

Biden was endorsed by Planned Parenthood and NARAL, had called abortion an essential healthcare service, pledged to codify abortion into federal law, supports repealing the Hyde Amendment and chose an equally extreme abortion proponent in running mate Sen. Kamala Harris. He had also promised to end the Obamacare mandate exemption for the Little Sisters of the Poor, thereby forcing the Catholic sisters to fund contraception and abortifacients in their health plan.