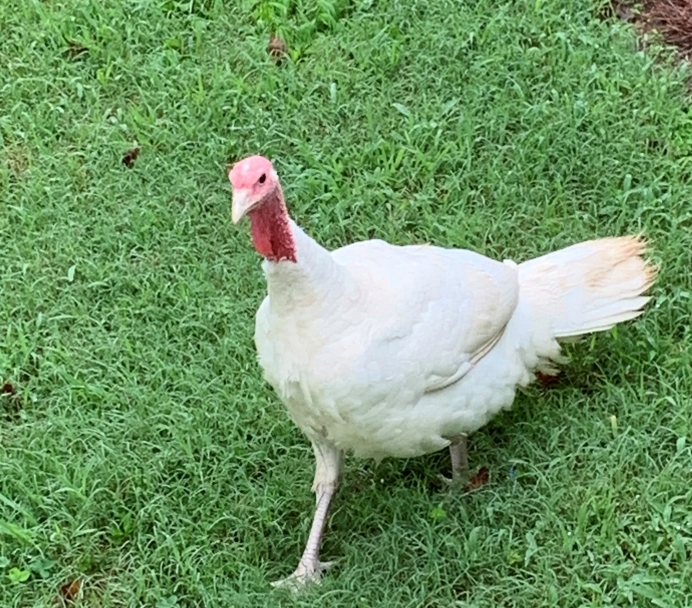 Lessons from a homeless turkey

A week or so ago my wife Jenn and I were drinking coffee on our back deck, which is what we do almost every morning. It’s a routine, a gentle way to start the day. We talk about virtually anything, but on this day, we had a new piece of subject matter.

“It’s a turkey,” she said, pointing at the yard next door.

Wildlife isn’t a surprise in our neighborhood. We see deer running through our yard regularly, and notably, a fox has taken up residence in our area, apparently scouting new real estate. The good news about the fox is that all of us neighbors keep up with his whereabouts (“He was up at John and Paula’s last night!”), which makes conversations lively in a sleepy suburban neighborhood.

But this turkey was different. He wasn’t running, but loping slowly, taking all the time in the world. Obviously, this turkey was domesticated. It took only a second to figure out our dilemma: The owners of the home next door recently moved to another state, leaving a “for rent” sign. The turkey, apparently, was not allowed on the trip. Because no other plans were made, this member of the foul family was now the responsibility of the rest of us.

We named him Earl, for no reason whatsoever. In fact, we later found out Earl is she, so this is of course, problematic. The dogs and cats of our area will likely pick up on this and make Earl a laughingstock, so we need to brainstorm new monikers.

In the last week, Earl has decided we are his (woops, her) new owners. She drops by for “morning coffee,” clucking at us, apparently asking for food. We feed her what we can, so we’re committed.

Strays are nothing new for the Walden fam

While I’m not a pet fanatic, this isn’t our first “adopt a stray” rodeo. For instance, a while back—when one of my daughters was in the spring of her senior year of high school--a cat appeared on our back deck.

I was out of town at the time and told my lovely daughter—specifically— “Don’t feed her, or she will stay forever.” When I got back home, I saw a bowl of milk on that very same back deck.

When I questioned said daughter about the issue, she told me in a way only a daughter can, “I’ll take care of her, I promise!” She was headed to college in three months. I gave the cat more than three months to live but didn’t argue. It was a lost cause.

Our daughter—who we found out later is allergic to cats—finished college, got married, has a child. And lives next door. Oh, the cat? Ten years later she’s fine, still living with us and loving life. She joins Jenn and I for morning coffee. Our dog (our one “planned” pet) hangs out with us as well.

While our cat (her name is Meatloaf—don’t ask why) is easy to care for, a turkey is quite the challenge. For one, I think of those dogs in the neighborhood. This doesn’t bode well for a slow turkey.

We’re looking at options. One neighbor suggested raffling off “Earl” for Thanksgiving, but we all decided this was a bridge too far. We’ve got to do right by this turkey. She wasn’t our choice, but she is now our responsibility.

First then, we’ve renamed her “Earlene.” We can at least give her dignity.

Next, we’re texting other neighbors who already have chickens or other creatures which seem to fit with turkeys in some way. Perhaps someone will create a home for our new feathered friend.

Point being, we may not like our situation, but our neighborhood wants to help. Somehow.

I’ve learned something through this experience. As a group, our neighbors want to help. Earlene is not “someone else’s problem,” she is our challenge. We’ll figure this thing out because deep down, most people care for others—even if the “others” are animals.

So it is with society as a whole. We’re seeing so much unrest at the moment, but let’s never forget that 95% of us are living our lives, trying to do the right thing . . . because we do care for others. And at this time of turmoil, good people are asking, “How can I make a difference?” The pregnancy help community is the answer to this question.

In the pregnancy help community, we see people and situations come to us which are unexpected, unplanned. They come to us struggling, hurting, unsure, fearful. We open our doors and welcome them.

Interestingly, this doesn’t even have to be about “ending” or even “fighting” against abortion. It’s about love and kindness—loving our neighbor as ourselves.

Those who call on us need good neighbors to take them by the hand and say, “I’ll walk with you. We’ll figure this out together.” This is exactly what we do.

Because of our mission, we have a great opportunity—right now--to appeal to the good in people. We can ask the Christian community—made up of so many kind-hearted people—to join us in bringing long term hope to those who so desperately need something good in their lives.

Now is the time to appeal to the good. Now is the perfect moment to go into our churches and communities and tell anyone who will listen, “If you want change which lasts, join us and bring hope to the hopeless--abundant life to the helpless.”

There is a lot of good in this world. Let’s foster the good, fanning flames of kindness, joy and hope. Flames which bring healing instead of destruction.

Tweet This: Now is the time to appeal to the good. There's a lot of good in this world. Let’s foster the good, fanning flames of kindness, joy and hope.

An update: As I was wrapping up this column, Earl received the answer to her prayers. A neighbor with plenty of room received our text, dropped by with a small cage, picked her up and took her to her new home. Her new name is Pearl and the last video we received was of Pearl standing by our friend in the kitchen, eating scraps and sipping water. Life is good.

Pearl now lives in luxury with chickens, ducks and other assorted members of the animal kingdom. She will eat well, always have a roof over her head if she needs it (or cares), and never want for anything. We’ll miss her, but we know—because someone chose to do good—she is in a better place than what we can offer.

And this is the goal, isn’t it? Whether a simple, domesticated turkey, or a human being made in the image of God, a “better place” is the answer. And because we in the pregnancy help community help our neighbors find better places, we have the joy of knowing we build better families and better communities. Isn’t this what neighbors are for?