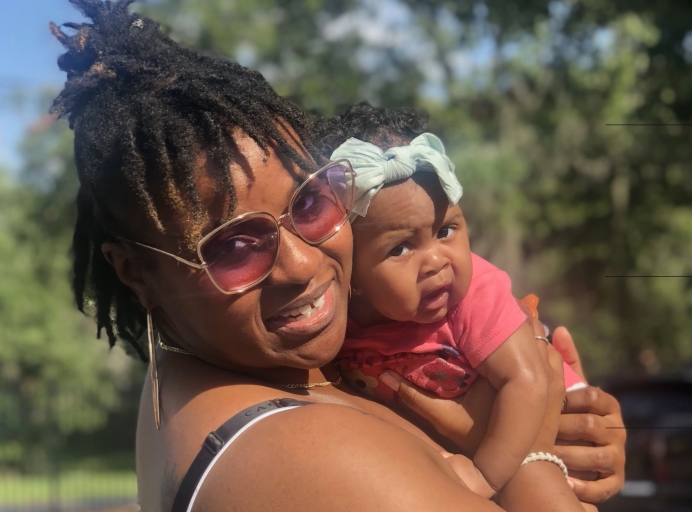 Kayla was faced with a very difficult decision following a drastic life change—whether to proceed with her third pregnancy.

“I was sure with a strong mind that there was no way I was going to continue the pregnancy,” recalled Kayla. “I had already scheduled my appointment at the nearest Planned Parenthood.”

Convinced she had no other choice but to abort her child, Kayla proceeded with a chemical abortion, but after a successful abortion pill reversal (APR) her baby daughter Serenity Grace was born this past January.

With her daughter alive and well, Kayla is convinced of APR’s validity and confident of God’s hand in saving her child. It is something Kayla calls, “a real miracle testimony of the legitimacy and possibility of APR success and the power of God.”

Kayla had arrived at the Planned Parenthood facility afraid and full of emotion.  There, she was given information on the process of a chemical abortion, also known as medication or medical abortion.

“I would take a two-part series of medication that would cease development and ultimately cause my body to miscarry and terminate my baby,” she said.

“I had pretty much blocked out logic because I know in my right state of mind, I would have never considered abortion, being a mother of two beautifully amazing children already,” Kayla told Pregnancy Help News. “I have always been pro-life!”

Kayla had determined that her situation was extreme, and her normal thoughts and reactions were, as she viewed it, “out the window.”

“After confirming that I was six weeks and five days pregnant, I was shown a short video on the abortion process and the role each medication would do,” she explained.

The video was a portrayal of a doctor and a patient talking through the chemical abortion procedure, what each pill would do and what the viewer could expect from taking the pills.

There would be cramping and bleeding until your body expels the fetus.

As Kayla remembered, it was, “A depiction of a short process and then kind of back to your life.”

Are you sure about this?

Kayla was given mifepristone, the first pill in this two-drug abortion process, which blocks progesterone, the natural hormone in pregnancy that sustains the pregnancy.

“I took it in hand and for a few seconds I looked down at the pill,” she recalled. “The still small voice saying, ‘Kayla, what are you doing? Are you sure about this?’”

That voice was drowned out by an ever-louder voice, she said, shouting, ‘It’s too late, you’re already here and you’ve already made your decision so follow through!’”

Then Kayla quickly swallowed the pill, after which she was given instructions for her next steps. In 24 hours, she was to take the second drug, misoprostol, which would cause her to go into labor and deliver her deceased child.

“They sent me home with four pills I would place in the back of my cheek and let dissolve in my mouth,” Kayla said. “Within a couple of hours, I could expect cramping to begin.”

She recalled that they told her it would be a four-to-six-hour process from there and then it would be over.

The bag of pills also included ibuprofen for pain, something for nausea and birth control pills to start immediately after the abortion.

Chemical abortion has numerous possible complications associated with it, including an incomplete abortion, potentially resulting in the need for a follow-up surgical abortion, heavy and prolonged bleeding, infection, fever and digestive system discomfort, according to the Mayo Clinic. Many other negative side effects have also been reported.

And given the prevalence of the at-home scenario with chemical abortion, when complications do occur, the woman is essentially left to deal with them at home, potentially alone.

It may be possible to save your unborn child

Women who take the first abortion pill and experience regret, and who wish to try to reverse their chemical abortion, may be able to do so if they act quickly enough.

The APR protocol is a newer application of a treatment used for decades to prevent miscarriage, and involves prescribing progesterone to counter the first abortion pill.

Along with progesterone having been used routinely and safely with pregnancy for decades, a 2018 peer-reviewed study of abortion pill reversal found that 64%-68% of the pregnancies were saved through the protocol, there was no increase in birth defects, and there was a lower preterm delivery rate than in the general population.

APR is the target of pro-abortion activists, who try to debase the treatment’s validity in the media and attempt to block laws ensuring that women be informed of the protocol’s availability.

These pro-abortion efforts attempt to dismiss the protocol as “junk science,” nonetheless, statistics show that to date more than 2,000 lives and counting have been saved thanks to APR.

Women who contact the APR hotline are connected to an APRN provider who will get them started on the protocol as soon as possible.

Reversals have been successful as long as 72 hours after the first abortion pill is taken, but results are best within 24 hours.

After she took the first abortion pill, Kayla’s regret persisted.

“I remember the rest of that day and through the night feeling so numb, alone, afraid, and that I knew deep inside I had done something terribly wrong,” she said. “But I was going to suppress it, make peace with God and myself and live with my decision. After all, it was my choice.”

“Please save my baby!”

Kayla was awakened the next morning with a complete change of heart.

“The presence of God met me in the midst of that very dark and uncertain place,” she said. “I woke up knowing I had made a huge mistake. I remember regretfully asking myself, ‘What had I done?!’”

“I instantly thought of the beautiful faces of my first two children and began to hear in my spirit what was like the voice of a small child saying, ‘Why don’t I get the chance to live like they got?’” Kayla recalled. “I thought, how could I so willingly give life to my first two without hesitation, yet not to this one?”

“I also thought just because my life and circumstances are what they are currently, why shouldn’t this baby deserve to live?” she recounted. “The idea that I had chosen to end the life of my very own child shot through me and brought me plunging to my knees!”

Tweet This: "I also thought just because my life and circumstances are what they are currently, why shouldn’t this baby deserve to live?”

Crunching down and cradling her stomach, Kayla recalled how she cried out with deep sorrow, “I literally begged God to forgive me, crying to ‘Please Save My Baby!’ over and over again! I laid there and just wept!”

Sensing God’s Spirit upon her, she said, “I felt His love, strength and power so strongly that it led me to get up, step out on faith for what I had asked for and trust Him.”

Grabbing her phone, Kayla searched the internet with, “What if I took the first abortion pill and wanted to change my mind?”

“To my complete surprise - answers! There it was, ‘abortion pill reversal,’” she said. “Shocked, desperate and intrigued to know more, I began to read and cram my mind with as much information about the process.”

“I remember vividly reading that there was only about a 60-64% chance of having a success with APR,” Kayla said. “Still unsure, I said to myself, ‘this isn’t 100% but I have more than a 50% chance of my baby surviving, so I’m attaching my faith to that 64% and I’m going to believe God for a miracle!”

Kayla stated this about the hotline representative:

“She was so caring and really helped me feel a great sense of hope. She handled my call with genuine care but urgency as she explained that they would locate an APR provider in my area who would be able to administrate the progesterone and provide me with special and closely-monitored maternity care.”

“I felt a calm come over me like none other,” Kayla said, “that I was in the right vein where God wanted me to be and to just trust that He is in control of the situation.”

She was connected with a California pregnancy help medical clinic where she received, “Love, care, understanding, encouragement and even prayer.”

“It was so powerful and so evident this was all a part of the plan of God,” Kayla said.

A little warrior, an APR survivor

She remembers feeling half faith and half fear while waiting to have the ultrasound that would determine if her baby’s heart was still beating. Kayla then praised God for the sound of her daughter’s strong heartbeat.

“Sobbing, I knew right then my baby was a little warrior,” she said.

Kayla explained to the doctor’s office that she would be moving back home to Florida soon after and would need to continue seeing an APR provider there.

She said it was by God’s divine design that there was an APR provider who could continue her care where she lived, calling this “yet another confirmation of God.”

“I was blessed immensely,” Kayla said.

From the day she walked into the second APRN office she said the providers and staff there were “absolutely amazing.”

“They were loving, professional, passionate and truly a blessing to me and my unborn child!” Kayla said.

Every week she was seen by the sonographer who closely monitored the development of her baby as she continued taking progesterone daily.

“Week by week my baby grew stronger,” Kayla recalled. “I knew more and more that I had made the right decision by stepping out and trusting that God was going to see us through, work everything out for our good, and that He had a great purpose!”

Tweet This: Week by week my baby grew stronger. I knew more and more that I had made the right decision.

Although her circumstances were still not favorable and she was struggling to get her life back in order, she said, it was sinking in that she would be having her third child.

“With God’s help, guidance, inner healing, love, and goodness I made it to full term, and in January of 2021 my miracle baby arrived!” Kayla exclaimed. “She fought through and beat the odds! She’s an APR survivor!”

“God gave me the name Serenity Grace and I believe she brings both to my life in a very deep and meaningful way,” said Kayla.

Her healthy, strong, and beautiful daughter is a daily reminder of APR and God’s grace and a message that Kayla is eager to share.

Kayla called in and shared her story on the radio recently when she happened to tune in one day and hear that APR was being discussed.

Her APR experience has her hoping her story can save other women from chemical abortion and the feeling that they have no other choice.

“I hope to encourage, even if just one woman, to trust God if you are, like I was, in a dark and scary place of an unwanted or unplanned pregnancy, because life is a gift,” Kayla said. “There is hope. Trust God! For His love is everlasting.”

Tweet This: “I hope to encourage, even if just one woman, to trust God if you are in a dark & scary place w/unplanned pregnancy-because life is a gift”