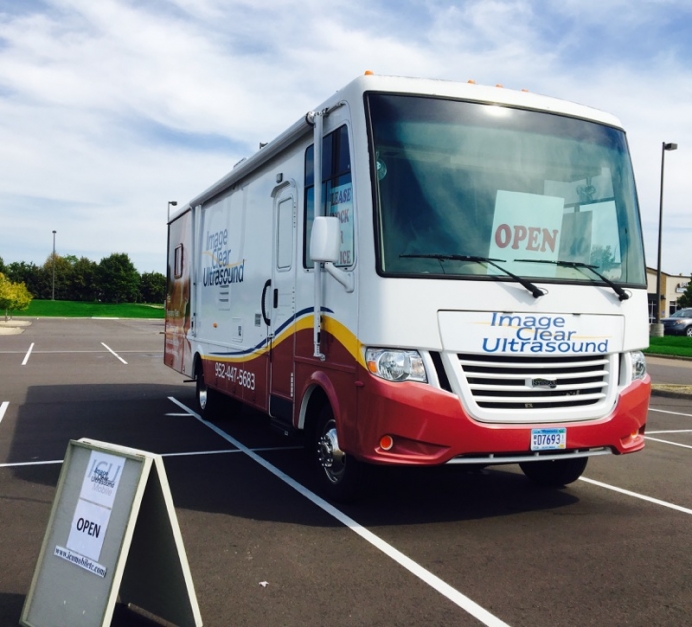 “‘The wall around this girl’s heart was tough,’” Anne Fredrickson recalled the nurse telling her. “During the ultrasound, she looked at the boyfriend and said, ‘You know—we could do this, we could be parents.’”

Fredrickson, the director of Alpha Women’s Center located in a suburb of Minneapolis, Minnesota, hears stories like this often.

“It happens all the time,” Frederickson said. “A young lady will get on and think that’s she’s pregnant. We’ll confirm it with a pregnancy test, and there’s kind of a wall that you see. They’re really afraid and want the problem to go away. But, they see that ultrasound, and it softens their hearts—it just changes everything. Suddenly, it’s a whole different deal, and they think ‘I can do this.’ The ultrasound reveals the humanity of the baby.”

According to the Minnesota Department of Health, nearly 10,000 abortions took place in Minnesota in 2016, with Planned Parenthood doing more than half. Alpha Women’s Center is making strides to reduce the number of abortions in its area, putting a mobile unit on the road and parking it in strategic locations where the RV, part of Image Clear Ultrasound, can be seen by many. One of their locations is near a Target.

This is where Cassie found hope. A married woman with a child, she had no medical insurance and was living with her parents. Providing the medical services, including ultrasound at no charge, relieved some of Cassie’s anxieties.

“She felt like there was someone there to listen to her when she was a bit uncertain as to what was going on,” Fredrickson said. “She was really grateful for the service that we provided. It gave her a little window of peace about that pregnancy instead of being afraid. She told us, ‘It was like you were angels there to help me.’”

Jackie also found hope and help through Alpha. A young woman in her twenties, Jackie sought out the organization’s mobile unit.

“She followed our mobile back to the parking lot,” Fredrickson said. “When our staff got out, she was waiting in the parking lot with this little baby boy. She had previously placed a child for adoption when she was 18, about four years ago. She found herself pregnant again in another situation and wasn’t sure what to do, considering her options. We had been there for her with an ultrasound last fall; she decided to keep and parent her baby, having her son in the spring of 2017.”

Alpha Women’s Center opened in 1982 and for most of its history, the center was housed in a brick-and-mortar building. However, a new vision came to those in leadership and in 2011, the building was sold. Alpha took the proceeds and invested in a mobile unit, purchased in 2013. A local church donates parking space for the 31-foot RV and office space for Frederickson and her staff.

A nurse and client advocate take the mobile unit to three locations each week, providing the services women seek, all at no charge for the client. And like many pregnancy help centers, Alpha relies heavily on volunteers, many of whom serve as patient advocates.

Even during Minnesota’s harsh winters, the staff and volunteers are on the job, meeting women where they are. “Most abortions happen in Minnesota from January to April. When it’s most miserable for us to go, that’s when we’re needed the most,” Fredrickson said.

This year saw several changes within the organization, including new leadership hires. Fredrickson began her duties as director in February. A new nurse was recently hired as was a mobile operations manager. “The three of us are all new—we’re excited to take the ministry forward,” Fredrickson said.

They also hope to increase the number of partnerships and possibly have another location to add to their weekly trips into the community, thereby reaching more clients.

Nearly half of Alpha’s clients come on board after seeing the mobile unit in a business parking lot, Fredrickson noted. Others make appointments online. The organization advertises via Google ads, campaigns on bathroom stalls, and by networking with churches. Having positive relationships in the community is important, Frederickson said. “We’re not welcome in a lot of places, but we do have good relationships with some store managers.”

She hopes to see those positive relationships expand to other businesses. Knowing that ultrasound makes an impact, with four out of five women who see the ultrasound image of their unborn choosing life, increasing visibility with an additional location can mean further impact upon the abortion rate in the state.

“We want to be at the crossroads of that decision,” Frederickson said.