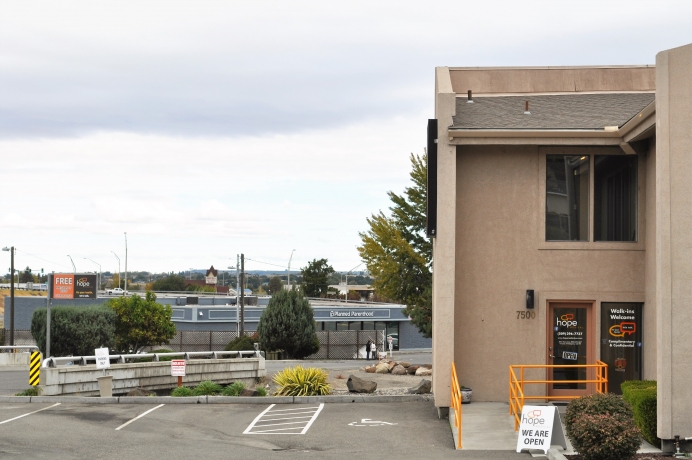 Last Hope for Life: How One Pro-Life Center is Rescuing Lives from Abortion Near a Planned Parenthood

On the dead-end road that leads to Planned Parenthood in Kennewick, Wash., stands one last bastion of life: Hope Medical of Washington. After two years in its new building, the pro-life center has caught the eyes of women who thought abortion was their best hope.

As any woman who's turned aside from Planned Parenthood to Hope Medical instead could tell you, it turns out life—not abortion—was her best hope by far.

The vision for Hope Medical began in 2014, when a travel nurse named Cherie Childers—new to town along with her husband—joined a 40 Days for Life prayer vigil outside Planned Parenthood. Just down the street, in plain sight of every woman resorting to abortion, stood a building with a “for sale” sign out front.

Already a volunteer at nearby Tri-Cities Pregnancy Network (now “You Medical”), Childers suggested to leaders they look into buying the building. But, the network had recently made inroads into a local high school, and decided a head-to-head stance against Planned Parenthood would put that opportunity in jeopardy.

While she understood and agreed with the network’s decision, Childers held onto her vision for a permanent life-affirming outpost near Planned Parenthood.

In 2015, Shira Wise—who Childers had met praying with 40 Days for Life—started a crowdfunding campaign. After just three weeks, the campaign raised $280,000, enough to buy the building outright.

By January of 2016, Hope Medical of Washington was offering women a lifeline just down the street from the abortion giant.

On the very first day Hope Medical opened its doors, a woman on her way to Planned Parenthood stopped by the pregnancy center instead. As she left, the young woman wrote a quick note to thank the staff and volunteers for welcoming her and giving her everything she needed to choose life for her baby.

“I was on my way to Planned Parenthood when I saw the Hope Medical sign and saw that they were open,” the woman wrote. “Not only were they very helpful, but they made me feel very comfortable. Thank you.”

That handwritten note—which Childers keeps on hand as a reminder—was just one of many affirmations Childers and her team have received along the way.

LIFE on the Road

Childers and her husband landed in Kennewick after just under a decade on the road, where Childers kept up her work as a labor and delivery nurse in a travel capacity. They’d spent 25 years raising a family in Bellingham, Wash., but decided to leave home and join their daughter in Montana during her last months of pregnancy in 2006.

That initial uprooting turned into a new way of life for the Childers, who eventually moved from Montana to Hawaii, where Childers kept working as a travel nurse.

At a church service in Kona, Childers met Anna and Matthew Schaetzle of The Pregnancy Center, which has served the community for 25 years. When she told them she was a labor and delivery nurse, the couple invited her to work with them, offering to pay for her ultrasound training.

Though the timing of that training didn’t fit Childers’ schedule, the invitation made a long-term impact on Childers.

“In Hawaii, when you take report as a nurse, you learn all about the patients,” Childers said. “I'm finding out how many pregnancies there are, and in Hawaii they tell you how many abortions they've had, along with how many births they've had. I started becoming very grieved because there were more abortions performed in Hawaii than there are births. That was a big deal to me. That was a very big deal.

“The numbers were enough to change the course of my life.”

Many Teachers, Much Learning

Because travel nursing would only allow her to volunteer with any one pregnancy center for a few months at a time, Childers felt she should foot the bill for her own ultrasound training in order to get involved with local pregnancy help centers.

Once she and her husband moved back to the mainland, Childers went through a two-week training with Sonography Now (now Sparrow Solutions) and volunteered at a pregnancy center in Eugene, Ore.

With long hours at the hospital, Childers gained little sonography experience at Dove Medical, then a newly established center in Eugene. When her nursing stint in Eugene ended, Childers and her husband moved on to Las Vegas, where she began volunteering at First Choice Pregnancy Services—a pregnancy help medical clinic just up the street from a late-term abortion business.

There, Childers refined her skills under an experienced sonographer, to the point where she was asked to join the staff part-time.

“At that time, we were performing 25-35 pregnancy tests a day, along with six to eight ultrasounds every day,” Childers said. “I loved serving the population there. And we were doing as much as we possibly could within the constraints of our building. We always had a full lobby of people to serve. That's why we started working on Saturdays.”

“I did scan a baby in Vegas at 13 weeks who was a reversal, who ended up being born,” Childers said. “They were worried about growth, but we saw appropriate growth and strong heartbeat at 13 weeks after the reversal.”

During their two-year stint in Las Vegas, Childers worked with First Choice, while her husband—a retired law enforcement officer—leveraged his experience in law, real estate, church planting and setting up nonprofits to work alongside Sparrow Solutions’ Connie Ambrecht to help pregnancy centers add free ultrasound to their services.

After two years in the desert, the desire to live near their growing family drew the Childers back to Washington state—this time to eastern Washington and its similar climate to Las Vegas.

Nine months later, the couple found themselves at the helm of the fledgling Hope Medical—with Cherie’s husband as volunteer executive director and Cherie as nurse manager. A local Knights of Columbus chapter donated funds for an ultrasound machine, and Childers called on her friends at Sparrow Solutions to train an additional staff member and 10 volunteers to scan ultrasounds.

“When I look back, it’s miracle after miracle after miracle,” Childers said. “God put people in my life, like Anna and Matthew, and Connie—whose company taught me how to do ultrasounds—and then Kari, my nurse manager at First Choice. Then to actually see Hope—the signs go up there, and the community making it happen—it's really amazing.”

Hope’s Place in Kennewick—and the World

Childers’ reliance on the strength of the larger pregnancy help community is a staple of Hope Medical’s DNA. Most recently, the clinic added STI testing for women with the help of Life Choices in Joplin, Mo., where Childers found yet another set of mentors. Eventually, the clinic hopes to remodel to expand services to include men as well.

Even in her local community, Childers views her clinic as an “emergency department,” poised to handle emergent pregnancy crises—before clients resort to abortion—or afterward, when they seek to stop an in-process chemical abortion through Abortion Pill Reversal.

Across town, she said, Tri-Cities Pregnancy Network excels at operating more like a “hospital” for longer-term pregnancy support.

“We don't need to duplicate the really good programs that have been here for 25 years,” Childers said. “We partner in the sense of sending people to the other clinic in town for ongoing programs and help like Earn While You Learn. The other clinic has a men's program, as well, and we'll send them there.”

Tweet This: This #prolife outreach is saving lives every day in front of Washington state #PlannedParenthood.

For Childers, it is teamwork that makes the pregnancy help community strong.

“I love our global community,” she said. “For me that's a big driver, because I don't have to feel alone in this mission of hope. There's all kinds of us, and it's just about what the Lord is bringing, and being available to listen to what He has to say, and then to do it.”