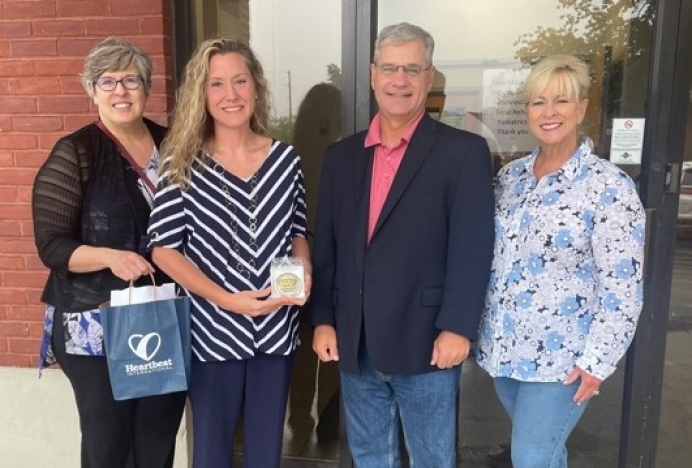 Change and consistency are the hallmarks of pregnancy help centers (PHCs). Change, because to be able to meet the needs of clients in an ever-changing culture, centers must keep pace. Consistency is vital to meet the huge commitment involved in serving the most vulnerable in our society and their mothers and fathers.

Heartbeat of Toledo has a 50-year record of modeling effective change and consistency.

Heartbeat of Toledo has continually made changes through its offerings over the years to continue honoring its mission statement, which is:

“Heartbeat of Toledo is a life-affirming organization whose mission is to be the best source of information and support to women facing pregnancies and to help moms, dads, and babies in need.”

“We recently had a woman named Julie, who was a ‘Your First Look’ patient in the 1980's, seek us out to share her story,” she said. “She held a photo of her family that included her grandchildren and let us know, an entire generation of people were born from the life choice she made back then, supported by Heartbeat of Toledo.”

“It reminded us of the generational impact, opportunity and responsibility we have to serve our community,” Palacios said. “We are grateful to remain steadfast to our mission and serving our community, for 50 years.”

Heartbeat International Ministry Services Vice President Betty McDowell weighed in on the significance of the award.

“The Legacy Award is the highest honor Heartbeat gives to people, or in your (Heartbeat of Toledo) case, an organization recognizing your commitment to the mission and having an impact to be honored and remembered.”

McDowell continued, “Heartbeat of Toledo best represents the incredible impact of pregnancy help work with your 50 years of staying on mission and making a difference in the lives of women, children and families. Your organization has such a rich history to which we are so grateful.”

Heartbeat of Toledo started out as Birthright in May of 1971, as the founders, Dr. John F. Hillabrand and Mrs. Elenore Maier, along with a group of supporters, recognized the need for emergency pregnancy services in Toledo.

The Birthright model had originated in Canada a few years earlier, and pregnancy help pioneers like Hillabrand and Maier were seeking to offer women help in the U.S., so they began to adopt the Birthright model. Later as hotlines and other services that were not part of the that model, nor allowed in the organization’s charter were implemented, Heartbeat of Toledo’s founders recognized that a franchise model was not what was coming to fruition. Heartbeat of Toledo became the new name in October 1971.

Hillabrand and Maier are the also founders of Heartbeat International, with both organizations begun within a few months of each other in 1971, Heartbeat of Toledo in May and Alternatives to Abortion Incorporated (AAI) - now Heartbeat - in November of that year. At one point the pregnancy help organizations were housed in the same building.

With different models and names came the vision for a "Federation of Independent service providers" that would become Heartbeat International.

This collaboration opened the door for the start of what was originally known as “crisis” pregnancy centers, and Heartbeat of Toledo was one of the very first pregnancy help services in the U.S., laying the foundation for the organization's legacy and hence its receiving Heartbeat International's Legacy Award.

Maier, a Holocaust survivor, had reflected on the tie between abortion and her experience in rescuing many women and children from Nazi oppression. Maier had written about “lethal inhumanity” that it, “takes its toll, not only from the victim, but also from the oppressor, as well as from those who stand by idly or helplessly in silent acquiescence.”

“And so it is with abortion,” Maier continued. “The victim loses every time. The abortionist becomes emotionally detached and insensitive to the value of human life. The bystander, even though initially interested and concerned, may tire of the controversy and succumb to the semantic gymnastics and clever subterfuge of the proponents.”

Maier stated as well that, “If we are not pro-life, we are against our own survival.”

Her concerns voiced in 1971 proved to be a grave reality unleashed on the United States in the 1973 Roe v. Wade Supreme Court decision that would legalize abortion nationwide.

A long legacy of service to women and families

Dr. Hillabrand, in connection with his medical practice, helped Maier establish a small office offering free pregnancy tests in a time when pregnancy tests were sent to medical labs for results. Maier, along with a nurse from Hillabrand’s practice, Esther Applegate, operated the center. Other volunteers also provided services.

A second Heartbeat location in South Toledo opened in 1988.

Keeping up with changes in clients’ needs, free ultrasounds, STI testing, and options counseling started in 2006.

Since 2011 Heartbeat of Toledo has included early-pregnancy ultrasounds through a program called, “Your First Look, Women’s Center.”

The model of utilizing volunteers to staff the centers continued until 2009 when the first paid staff member was added. Today there are 15 paid staff and 20 volunteers serving approximately 2,000 families per year.

Prenatal and parenting services are offered through “Heart to Heart” which offers material aid, classes, and resources to expecting and new parents alike.

In 2016 the center started offering Adoption Specialist appointments for those considering adoption. Sharing Hearts is an adoptive birth parent support group offered for those who have placed a child in an adoptive home. They provide vital support once the baby is born.

To serve fathers, this year Heartbeat of Toledo partnered with Tribe of Dads to help men become better dads. The program offers mentorship, education, and communication. The Facebook group alone has over 7,600 members.

Heartbeat International president Jor-El Godsey remarked on the coinciding of Heartbeat of Toledo receiving the Legacy Award while also celebrating 50 years of pregnancy help service in a movement that is also marking five decades.

“In honoring Heartbeat of Toledo, not only are we recognizing their Spirit-filled tenacity and mission-mindedness, but by extension we are celebrating a movement that is only just beginning to have 50th anniversary milestones,” Godsey stated.

In talking with staff and volunteers from PHCs over the years, Godsey said one challenge has consistently been present, and that is continuous change, which he called, “stretching to serve.”

“Heartbeat of Toledo is a testament to a pregnancy help movement that is continuing to grow, stretching to serve, and intent on impact into the future,” Godsey concluded.

Tweet This: Heartbeat of Toledo is a testament to a pregnancy help movement that is continuing to grow, stretching to serve and intent on future impact

Adjusting promptly and well as needs change is key to a PHC persisting in service to women and families, and part of how Heartbeat of Toledo has forged its legacy.

“We are forever grateful to those who came before us that poured into Heartbeat of Toledo, creating the amazing space for women and families that we have today,” Palacios said. “We honor our history, the program creators, donors, volunteers and staff that own a piece of who we are, today.”

Editor's note: This article has been updated with more detail surrounding the establishment of Heartbeat of Toledo and Heartbeat International.