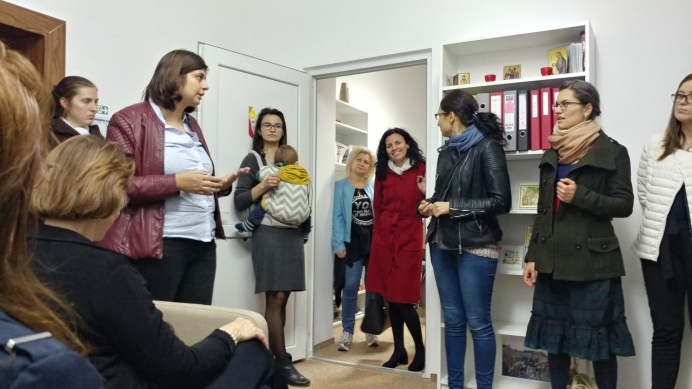 How Today's "Abortion Survivors" are Fighting for Life in Romania

Cutting the ribbon at the Oct. 1 inauguration of the Counseling Center for Parents & Children "St. Alexandra the Empress" in Bucharest, Romania, 24-year-old Alexandra Nadane marked eight years along her journey into pro-life leadership. That journey began with an email.

As a 16-year-old volunteer at a social services agency, Nadane showed her director an email from a pregnant woman pleading for help with circumstances so bleak that others were pressuring her to have an abortion.

“It’s not our problem; ignore this email,” the director said.

“I was shocked,” Nadane said. “For me, it was normal to help a woman in this situation, with no job and under intense pressure from her parents and her partner.”

Since her agency refused to help, Nadane went to meet with the young woman herself. She reminded the woman that her relationships could be restored, but an aborted child could not. Encouraged by Nadane’s personal concern, the young woman resolved to keep her child.

But would she hold firm once she got home? Nadane went with the woman to talk with her parents. “I told them, ‘Make me a list of all your daughter’s problems and I will resolve them,’” she said. Though doubtful that a 16-year-old could deliver on such a rash promise, the woman’s parents made the list.

“I went home with that list and prayed, ‘God, what have I done?’” Nadane said.

Within two days, people had stepped forward to meet the woman’s needs.

“For me it was a wonderful experience because I understood my vocation in life,” Nadane said. “From that moment, I started to find pro-life groups, and learn about pro-life projects, and I read about pro-life organizations from the USA.”

Nadane went on to start Students for Life in Bucharest, an organization of which she is now president. Next, she set about mobilizing March for Life organizers across the country. That project, which was present in about 25 cities four years ago, has now grown to 287 cities in Romania and the Republic of Moldova.

This year, Romania alone rallied over 110,000 participants for its seventh annual March for Life, which was held on the Feast of the Annunciation. As Nadane points out, the annual March’s proximity to the celebration of the most important pregnancy ever has caused even the liberal-leaning media to take notice of the movement.

Nadane’s goal for the March has been to open public dialogue on difficult issues surrounding pregnancy in a nation ravaged by abortion after generations of Communist rule: the devaluing of the family, false assumptions about abortion, rejection of children with disabilities, and the stigma attached to adoption.

“Three years ago, the theme was ‘Adoption, the noble choice,’ because in Romania adoption is very complicated,” Nadane said. Not only are adopted children stigmatized, but the state mandates that those children be handed over to orphanages to wait as long as three years for the state to choose their adoptive families.

Even without pressure from the state, abortion often appeals to women facing unexpected pregnancies as a more palatable option than adoption. All the more in Romania, where longtime Communist ruler Nicolae Ceausescu responded to a skyrocketing abortion rate—as high as 80 percent of pregnancies ended in abortion during the mid-1960s and the early 1990s—with an equally repressive childbirth quota designed to rebuild a dying population.

With many Romanian women having gone through multiple abortions in their lives, Nadane’s pro-life message is striking a deep chord within the heart of women who know firsthand the life-long devastation of abortion.

Now, Nadane and other pro-life workers in Romania are anxious to resurrect their nation’s traditional love for its children. For some time, Nadane sought foreign experts in crisis pregnancy work, who would come to Romania and train pro-life workers.

“I had prayed for a training because in Romania we don't have experts on counseling women and organizing pregnancy centers,” Nadane said.

Her prayers were answered when Heartbeat International—the world’s largest network of locally operated pregnancy help organizations—sent longtime president and current board chairman Peggy Hartshorn, Ph.D., along with its maternity housing specialist Mary Peterson, to Bucharest this fall to train 70 pro-life volunteers from Romania, Moldova and Malta.

Hartshorn and Peterson were joined in Bucharest by Vesna Radeka, who serves as executive director of Choose Life Center, a Heartbeat affiliate in Serbia.

Focused on stimulating the region’s few existing pregnancy centers while helping kick-start new efforts, the three women presented training materials and facilitated workshop discussions with the help of a translation team put together by Nadane. Eighty percent of the training participants did not have a pregnancy center in their hometown.

“When Mary or I did a presentation, it was followed by a panel discussion by the other two members of the team,” Hartshorn said. “Vesna had a great opportunity to add to the training on every topic. She provided ‘real life’ experience of how a center in that part of the world, also in a former Communist country, actually operates and makes use of Heartbeat training and resources.”

At the end of a question-and-answer time following Peterson’s discussion of post-abortion trauma, most attendees expressed doubt that women would ever talk about their abortions or the effects of abortion on their families. But that was about to change.

“A brave woman stood up and passionately told the audience that she experienced great regret about the abortions in her life,” Peterson said. “And as she has been open about that, she has encountered many, many women who express the same [feelings].

“It felt like a floodgate of the Holy Spirit opened. Many people in the audience shared stories of how they had been impacted by abortion—by directly having them, and by knowing their mothers and grandmothers had them.”

For many in the room, recognizing that they were “abortion survivors” was revolutionary.

“Even if you have not had an abortion, if your mother aborted siblings of yours, or if you know there have been abortions in your family, you then are an abortion survivor—a person who was not aborted but could have been,” Hartshorn said. “That is a devastating realization.

“Many people there knew and understood that abortion can harm women. But they didn't really understand how abortion harms the entire family. For people who have had aborted siblings, it changes the dynamics with the parents, as well as their feelings about themselves and their value. It was a very powerful thing. I had never been involved in a Heartbeat training where there was such a powerful revelation.”

More revelations lay ahead. As the trainers discussed fundraising, trainees lamented the absence of philanthropy in their national mindset. But they discovered hope in that arena, too.

Not only do a growing number of lay people show interest in pro-life ministry, but so do the clergy, as evidenced by the surprising number of men who attended the training, many of whom were seminarians studying for the priesthood.

“Romania has a vibrant religious heritage as an Orthodox country,” Peterson said of the nation in which between 80 and 90 percent of the populace claims that affiliation. “Life-affirming ministries are blessed to have the voice of the church speaking the message of life in unison with them.”

Nowhere was that unity more apparent than during the inauguration of Nadane’s new pregnancy center following the three-day training. Two high-ranking clergy performed a sanctification service, praying for the staff and volunteers of the new Counseling Center for Parents & Children, which the organization has named after St. Alexandra the Empress—the wife of the cruel emperor Diocletian who converted to Christianity after witnessing the torture and execution of St. George by her husband’s decree.

In recognition of Nadane’s pro-life work, during the inauguration, Father Ionuț Iordăchescu, Diocesan Counselor for Social and Philanthropic Mission at the Bucharest Archbishopric, gave her the Merit Award signed by His Beatitude Daniel, Patriarch of the Romanian Orthodox Church. Both men encouraged their people to follow Nadane’s pioneering example.

In the absence of awareness of pregnancy help centers—and national guidelines for them—Nadane chose to conform to the laws for a counseling center, which require having a psychologist and a social worker on staff.

With fresh training in hand, Nadane and her staff have stepped into the gap to keep pregnant women in need from ever being ignored again. 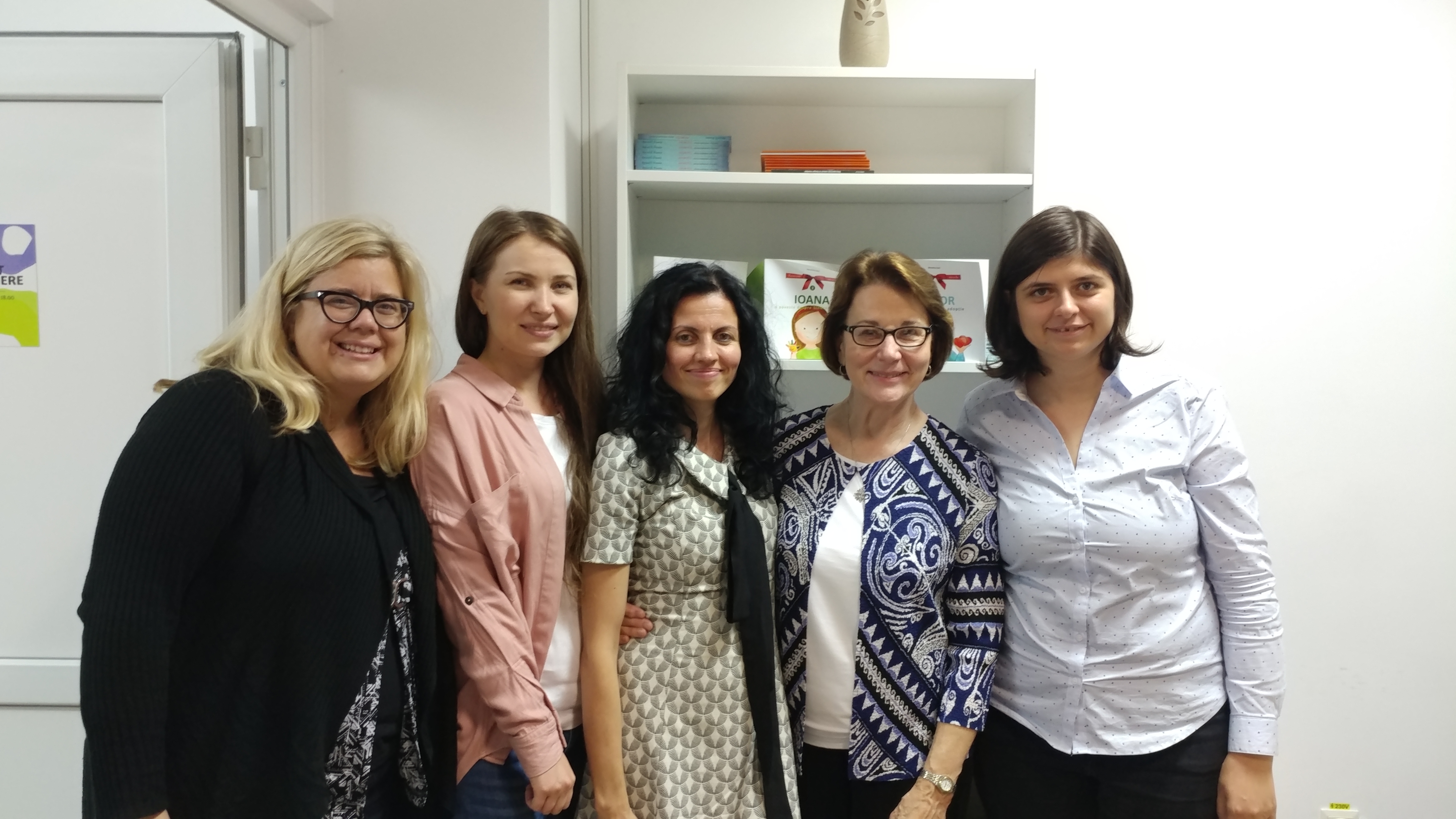