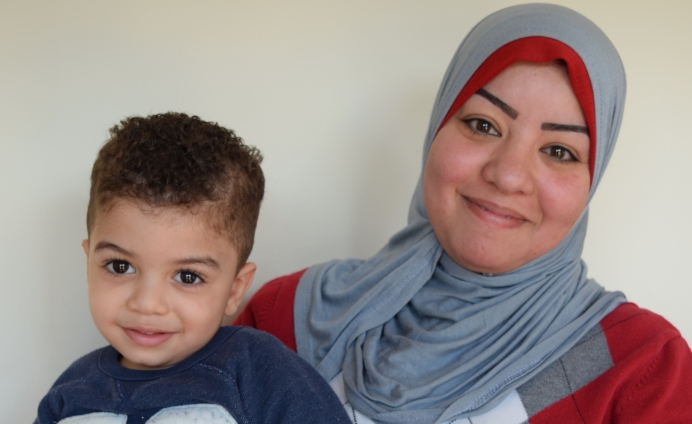 One pregnancy center in Nashville is now bringing the Gospel to women and families from 24 nations. Photo Courtesy: Pregnancy Care Center

How One Pregnancy Center is Reaching Muslim Women with the Gospel

When Lisa Cathcart and Aron Riley approached the principal of a local high school in the fall of 2014, their hope was to bring their sexual risk avoidance curriculum into the 10th grade wellness class.

That meeting went far better than they’d hoped, however, and soon, their pro-life pregnancy center was opening its second location—right on campus of the largest public high school in Nashville, Tenn.

Pregnancy Care Center’s unexpected inroad has landed them in an ideal position to reach over 2,300 students at McGavock High School.

“We were just floored,” Cathcart, the center’s executive director, said of the initial meeting with the school administrator. “We never expected that type of invitation from a school of that size and influence in the community.”

Eventually deciding to focus on sexual risk avoidance and pregnancy consultations at the high school, the pregnancy center—which started serving women in 2009—is also making the most of its constant presence on campus to help make students aware of its full spectrum of services 10 miles away.

At the center’s location in the Nashville neighborhood of Old Hickory, the staff and volunteers meet women with care that includes free pregnancy tests, parenting classes and material aid, as well as free ultrasounds through a partnership with Portico Pregnancy Center of Murfreesboro.

“What I do love is that it gives us the opportunity to build rapport with somebody,” Cathcart said. “If we can meet them where they're at, between classes or get them out of classes, we can build a connection, and then hopefully the next visit—or a future visit—will be here in our office.”

A major advantage to the on-campus site is its location within the high school’s Enrollment Center—a separate building that houses a variety of administrative offices. Its detachment from the main campus allows students to come and go without publicizing their need for pregnancy help.

Since the campus location opened in January of 2015, students have generally connected with Pregnancy Care Center through their wellness classes or by referral from high school faculty and staff.

In addition to reaching thousands of high school students, Pregnancy Care Center's main office is providing a unique opportunity to introduce their services to women and families from 24 nations in the immigrant-rich city where 12 percent of the population is now foreign-born.

Reflecting Nashville’s dramatic immigration influx throughout the past decade, many of the individuals the center is reaching come from first-generation American families. That demographic doesn’t represent the typical client Pregnancy Care Center had in mind when it began serving clients in Old Hickory, but it’s a welcome change of plans, Cathcart said.

“We have an amount of diversity that's new for us in this suburb,” she said. “They come from Middle Eastern, African, Central and South American countries. But by and large, those who are Arabic-speaking are the fastest growing group.”

Among the Arabic-speaking clients—which include both Coptic Christians and Muslims—many share histories of extreme poverty and religious persecution. Serving recent immigrants has presented a unique challenge for Pregnancy Care Center, as they work with women and families who are at the beginning stages of acclimating to Western culture.

“We are very intentional about speaking words of affirmation, connecting them with their worth and value,” Cathcart said. “We've had meetings with leaders who are more familiar with this population to help us understand more about the culture—how to speak or sit, or how to interact with our body language, helping us understand how to navigate these challenges, and ultimately how to build bridges between our cultures in order to minister more effectively.”

Whether it’s helping young women and girls married to much older men—a situation that prompts Pregnancy Care Center to act as a mandatory reporter under state law—or learning to react properly to a client who tries to barter for material aid the center offers for free as part of its parenting curriculum, Cathcart’s staff is still learning as they go.

Many of the 25 clients Pregnancy Care Center sees in a given week are just learning what it takes to be parents in a new culture.

“We've had some parents bring their baby with no car seat,” Cathcart said. “We'll give them a car seat and show them how to strap them in, because they’ve never seen that before. It keeps us on our toes.”

Since the bulk of the immigrants Pregnancy Care Center serves are there to help adjust to parenting in a foreign land, Cathcart has had to intentionally guard the center’s focus on reaching women facing unexpected pregnancies.

Particularly when a Muslim client comes in with an unexpected pregnancy, the stakes can be very high.

“If an unmarried Muslim client is pregnant by a Caucasian Christian partner, she will likely have legitimate concerns about the serious consequences she could face with her family and community,” Cathcart said. “There are very serious ramifications for those who do find themselves facing unplanned pregnancies within certain cultures.”

As they’ve learned to serve women from other cultures at both locations, Cathcart and her staff have also seen unanticipated openings for Muslim women and families to come into contact with the Christian message for the first time.

In one instance, two Arabic-speaking clients came together for help. One was a Muslim and the other a Coptic Christian, and since only the Muslim woman spoke English, she translated for her Christian friend, relating key concepts unique to Christianity.

“Because she was a Christian, we were speaking directly and openly with her about her faith in Jesus and praying with her, and the Muslim client would be translating all of this,” Cathcart said. “What we've seen is that the Muslim clients love to have us pray for them. They never turn that down; they're very respectful. We pray in Jesus' name. We've had them come in and tell us, ‘Your God listens’ and then tell us how the prayers have been answered.”