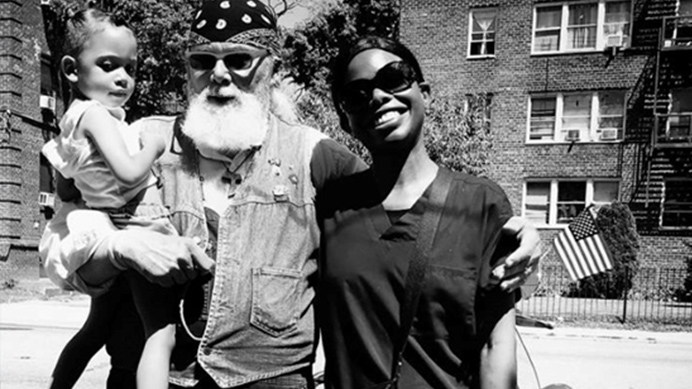 When Chantelle Chaffatt walked toward the front doors of a New York City Planned Parenthood, little did she realize the biker who approached her on the sidewalk would change her life.

Pressured by the father of her unborn child to have an abortion, Chaffatt, 27, was there at the abortion clinic against her better judgment.

“It was emotional abuse,” she said. “I never felt so alone.”

But the biker outside the abortion clinic had hope-filled words to share with her, helping her understand she had options, she had support, and she wasn’t alone. The man was a sidewalk counselor with Pro Bikers for Life, a non-profit pro-life group with chapters throughout the U.S (and even Germany and Italy) whose mission is to help preserve life by maintaining a prayerful presence and offering sidewalk counseling at abortion facilities.

The biker steered Chaffatt to the nearby AAA Pregnancy Options Center, a pregnancy help center in Hempstead that provides free pregnancy testing and materials assistance for mothers of children up to two years of age.

Reflecting back on that moment, Chaffatt says his recommendation and caring words were the best intervention she could have received.

“It was the most amazing experience,” Chaffatt said. “They told me about the options I had. They were like angels. They were protecting me and my child.”

Tweet This: “It was the most amazing experience. They told me about the options I had. They were like angels. They were protecting me and my child.”

As a result, today, Chaffatt’s life is completely different. She is no longer in the abusive relationship, and she has traded her waitressing job and the internship she had at the time to pursue a college degree while working part-time as a brand ambassador. And, she has her child, Robyn.

“I look at my daughter now, and I’m just so grateful!” Chaffatt said.

She likely wouldn’t have her child if not for the man she met on her way to the abortion facility. Chaffatt credits members of the group for putting her life back on track.

“They prayed for me and they gave me referrals. They were another support for me other than my family,” she said.

The life-affirming work of Pro Bikers for Life and pregnancy centers like AAA Pregnancy Options Center is vital to the battle for unborn children and their mothers in New York.

Known as the abortion capital of America, the state has zero abortion restrictions. Nearly 120,000 abortions—37 percent of all pregnancies—were reported in the state in 2014. As for New York City itself, data from the Centers for Disease Control indicates that one in every three babies in New York City is aborted. The city also claims the highest abortion ratio in the country: 575 abortions for every 1,000 live births.

To help meet the city’s tremendous needs, AAA Pregnancy Options has four locations in the New York City area, the one that helped Chaffatt in Hempstead, one in Deer Park, one in Massapequa, and one in Riverhead. Gloria Schreiber, executive director of the organization, says the four outposts provided $800,000 of aid to families last year.

Although the center is not a medical clinic, clients have access to free ultrasound screenings through the center’s partnership with local Catholic hospitals. Additionally, six men volunteer as advocates to meet with the men who come to the center with their girlfriends.

“We’ve had 15 babies saved because of them,” Schreiber said.

Now that her life is completely different, Chantelle is finding ways to help save babies like her daughter Robyn by helping other women who find themselves at a New York abortion clinic. She participates as a sidewalk counselor, and she hopes to volunteer at the center as well.

“It’s going full-circle,” Schreiber said. “The message she’s sending her beautiful daughter for the future is simply wonderful with everything that has come out of her situation.”

Chaffatt wants to give a message to other women who are facing an unplanned pregnancy as well.

“You can do this—you are not alone,” she said. “Your life will completely change, but it will also change if you have an abortion. People who work at pregnancy centers like AAA are there for you all the way. They are like an extended family you never knew existed.”

Corrections 9/7/18: This article originally stated that AAA Pregnancy Options had two locations. It has been updated to show there are four locations in Hempstead, Deer Park, Massapequa, and Riverhead. Gloria Schreiber's name has also been updated with the correct spelling.