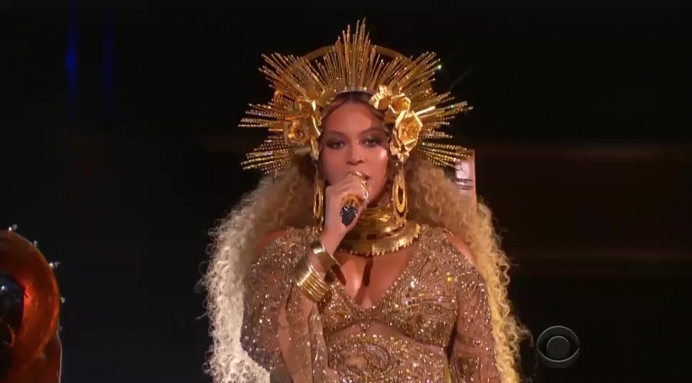 How Beyonce's Fertility Cult Powers the Culture of Death

In some respects, it would be hard to imagine a more direct rebuke to Big Abortion than Beyoncé’s elaborate performance at Sunday night’s Grammy Awards.

After all, even avowedly leftist media sources recognized the performer’s yet-in utero twin “babies”—strange word choice, that—as the real stars of the show, which itself was hailed as a “dazzling”, “spell-binding”, “devastating and lush”, tribute to motherhood.

What could be more pro-life than celebrating motherhood, right?

Of course, that assumes we’re ready to agree that what went on was a celebration of motherhood, rather than what it actually was: an all-out coronation of the new Fertility Goddess of the West, personified by the “Queen Bey” herself.

As Matt Walsh has pointed out elsewhere, there’s really no question that Sunday night’s production fits squarely in the realm of worship, idolatry and deification. From Beyoncé’s golden appearance to her “gravity-defying” levitation thanks to the magic of special effects, to literally receiving worship from a throng of her congregants, this was idolatry in broad daylight.

It’s worth pointing out, while this event has our attention, that the cult denying motherhood through abortion is the very same one that deifies motherhood at Grammy-night spectacles.

Cut off from its rightful role as a beautiful piece of God’s creative plan, motherhood either becomes a burden to be avoided at all costs or the ultimate pathway to exalted happiness—even godhood itself.

Here’s a moment to be reminded just how freely God’s people can receive his gifts, including motherhood and fatherhood, without making them the ultimate centerpieces and slave-masters of our hearts.

“Great is Beyoncé of the Americans!”

Acts 19 records the ministry of the Apostle Paul in Ephesus, home of one of the Seven Wonders of the Ancient World, the Temple of Artemis, which was a shrine to the goddess of fertility known locally as the “multi-breasted one.”

As Paul would come to find out the hard way, a cottage industry had grown up around Artemis. Not only so, but the industry had its own unions that—unsurprisingly—held a pervasive sway over the comings and goings of the city and its citizens.

Pluralism within the city thrived until a revival sprang up and “a number of those who had practiced magic arts brought their books together and burned them in the sight of all.”

Tweet This: "Great is #Beyonce of the Americans!" How Beyonce's fertility cult empowers #abortion.

A silversmith and union man named Demetrius called a town meeting in response, and in no time, people were filling the streets shouting, “Great is Artemis of the Ephesians!”

In one of his more comedic moments, the author, Luke, records, “Now some cried one thing and some another, for the whole assembly was in confusion, and most of them did not know why they had come together.”

For all its bluster, the vast crowd could only agree on one thing: “for about two hours they all cried out with one voice, ‘Great is Artemis of the Ephesians!’”

It’s not so hard to imagine the scene, is it? Just substitute a temple in modern-day Turkey for the Staples Center in Los Angeles and you’re well on your way.

Two Sides of the Same Coin

Now, for a place that had deified fertility, Ephesus had a remarkably low regard for the value of human life itself. The city was home to a famous gladiatorial arena and a “tolerant” environment to the ancient-world practices of abortion, infanticide and—when deemed necessary—outright human sacrifice to appease Artemis.

To the Ephesians, the only thing that really mattered was Artemis’ honor in the temple—that, and the profit they could make from said honor, of course. If they had to kill to maintain the honor of their goddess, the people were ready and willing to do so at a moment’s notice.

As Paul could testify, crossing the will of the fertility goddess was a dangerous proposition. Her wrath could be awakened and the honor of her name avenged in a moment.

Far from a corrective to the devaluing of human life, the ancient world’s deification of fertility only served to perpetuate a culture of death. That’s always the case when man makes a play for God’s throne—the more we exalt ourselves to His position, the more vulnerable we make ourselves to the whims of, well, ourselves.

In reality, there’s no discernable difference between the cult of the fertility goddess and the altar of human sacrifice. They’re two sides to the same idolatrous coin, neighboring businesses in the marketplace of God-less humanity.

As we respond to the fallout these two lies bring, God’s people have a golden opportunity to declare the same hope-filled message the Apostle Paul brought with him to Ephesus.

Tweet This: Deification, denial of motherhood 2 sides of the same coin. #Beyonce #prolife

God has come to earth to reconcile us to Himself, and He’s done so not in the form of a Fertility Goddess, but as the death-defying Giver of Life. Rather than calling upon His people to sacrifice or deify their children, our God is one who has given us His very Son—the Son whom He loves.

His is the love that truly delivers. His is a love far more “dazzling” and “spell-binding” than the latest carnival of human exaltation.

May Beyoncé’s children remember her as a truly great mother, but may our God be remembered as the one and only Giver of Life.