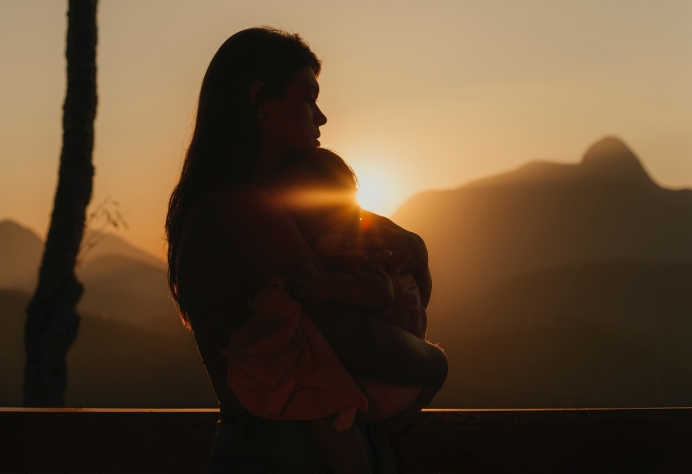 Like many women facing unplanned pregnancy, Brianna* felt had no other choice but abortion. But with Abortion Pill Rescue® she was able to change her life’s narrative, learning some things along the way.

“Long term everything is better to go with your gut and keep your baby,” she said.

Tweet This: “Long term everything is better to go with your gut and keep your baby”

Finding herself in the grip of fear led Brianna to see abortion as her only option.

The mother of four explained how the at-risk situation with her baby’s father drove her to consider and agree to abortion – something she wouldn’t have otherwise done.

“I have always been pro-life,” she said. “If I wasn’t, I wouldn’t have had my first three kids. But this time I was cornered because of how horrible the baby’s father is—he is a narcissist.”

Brianna went on to describe this man as manipulative and how she had shut off contact with him. But then having found out about the pregnancy, Brianna contacted him to tell him about their child.

“He brought up abortion,” Brianna said. “The thought of it made me feel guilty because I already had three children.”

The abuse and the fear coming from her troubling experience with ex-partner took her down a road she believed she would never travel. Her thoughts went to a horrible environment in store for her son (in a life including his father).

Brianna is not overstating this, as her former partner has been violent toward her and her children, prompting a warrant for his arrest and her taking steps for her and the kids to reside in a safe location.

Prior to this pregnancy, Brianna had been seen at the same abortion clinic three times.

With one of her previous pregnancies, she’d had received a sonogram and they instructed her to return the next day (for a possible abortion). But she never returned, until this last, her fourth pregnancy.

A female friend accompanied her this time, as she’d gone for a sonogram and returned the next day to take the first abortion pill.

Chemical abortion is a two-drug process. Mifepristone, or RU-486, is the first drug, which blocks progesterone, the natural hormone in a mother’s body necessary to sustain a pregnancy. The second drug, misoprostol, taken a day or so later, prompts labor, intending for the pregnant woman to deliver her deceased child.

If a mom experiences regret and acts soon enough after taking the first abortion pill, and begins abortion pill reversal, it may be possible to save her child.

Brianna’s friend remembered that the flyer’s information included a section that said, “Is it too late?”

An hour after Brianna took the first abortion pill, her friend texted her, saying that according to the APR flyer information she had a few hours to try and save her baby; she then gave Brianna the flyer.

Using the number provided on the flyer Brianna called the APRN through Heartbeat International’s Option Line. From there she was redirected to a local pregnancy help medical clinic for APR treatment.

The protocol utilizes an FDA-approved treatment (for over 60 years) to prevent miscarriage, and statistics show that more than 2,000 lives and counting have been saved thanks to Abortion Pill Rescue.

As per the APR protocol, Brianna was sent to the pharmacy to pick up her prescription for progesterone.

The following day she went to pregnancy help center for a follow-up sonogram. At this visit she also signed up for free programs offered by the pregnancy center and to participate in a Bible study.

Brianna continued to take progesterone until the 14th week of the pregnancy. Her son is now four months old and completely healthy.

She described herself as, “Blessed.”

Brianna receives support from the father of her other children calling him, “A man with a big heart.”

“He was there for her first daughter’s birth and raised her as his own,” she added. “Now he is supportive and helps us financially. Without him, I don’t know what I would have done.”

Brianna continues to receive material aid from the pregnancy help organization that supported her and where she began her abortion pill reversal treatment.

Like many, her life has been affected by the coronavirus. Her older two children currently do distance learning for school, and in July Brianna had the virus. She was doing bookkeeping and accounting for an Airbnb property, but then had to go on unemployment. Nonetheless, she considers herself blessed.

Brianna reflected on her journey.

“Before taking that first abortion pill, I was completely and totally against abortions,” she said. “I thought I would never do it and would never support it.”

“That relationship put me in a situation to do the unthinkable,” she said.

“I was not told anything about the possible reversal of the abortion at the clinic,” Brianna also pointed out.

“Don’t waste your money, time and going through the awful cramping from the first abortion pill,” she added.

Asked if she had any advice for women in a similar situation, Brianna said, “If you are second-guessing having an abortion, you shouldn’t be doing it in the first place.

“Accept your situation,” she said, “and make the best of it.”