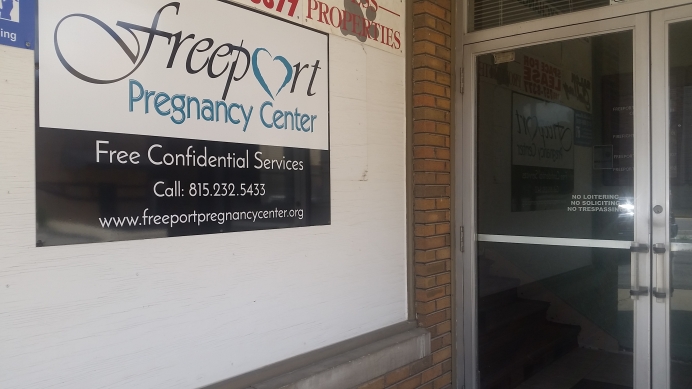 Few of the people working with Freeport Pregnancy Center in Illinois remember the days when their lone staff member met with pregnant women in two windowless rooms. Back then, pregnancy tests were done in a public restroom down the hall. The only material help available came in the form of maternity clothing—stored in a nearby church’s baptistry.

This year on Sunday, June 12, nearly 200 people easily fit into the center’s recently renovated offices to celebrate its 25 years of service. During the open house, visitors toured freshly painted rooms filled with new furniture and flooring, as well as the revamped store for the Earn While Your Learn program. The afternoon culminated in a prayer of dedication for the remodeled center.

Located near low-income housing developments, Freeport Pregnancy Center is within walking distance for women there. But Center Director Emily Giasson’s re-branding efforts aim to help the center appeal to other women as well. She explained, “My vision was that it's even a place a professional could come and be comfortable: a special place to come and want to come back to.”

Sue Kaney was one of the earliest people to envision Freeport Pregnancy Center being such a place. She worked with Stephenson County’s Right to Life, which had set up a local hotline for pregnant women. “However, we did not have a local place where women in crisis pregnancies could go for counseling,” she said. “We realized the need . . . and were frustrated we could not provide it.”

So Kaney and a handful of others asked Pat Palmer, director at Pregnancy Care Center of Rockford, Illinois, to help. With Palmer leading the way, Rockford’s daughter center opened in Freeport on June 11, 1991. Before long, Freeport Pregnancy Center became independent, outgrowing one building after another, adding services and staff, and equipping a steady stream of volunteers.

Sherrie Bicksler stepped up as executive director of the center in 2000. For the previous six months, volunteers had kept the center afloat in the absence of a director. “At our very first strategy planning meeting with the new board and me as director, we set three goals: we needed more volunteers, more finances, and ultrasound services,” Bicksler said.

Later, in 2010, the center had brought in a nurse manager, a medical director and a used ultrasound machine. Then a matching grant and donations through a local chiropractor’s office enabled them to purchase a brand new machine.

Some of the center’s favorite stories were about to happen.

For example, Giasson related, a client named Laquawn* came in, intending to end her pregnancy after discovering her partner’s infidelity. “We called the nurse manager, and she was able to come in and do an ultrasound. During that time, the baby’s hand waved across the screen, and that set it in stone for Laquawn: she knew she couldn't abort the child. She would figure out how to make it all work.”

Tweet This: That set it in stone: she knew she couldn't abort the child. #prolife #prolifegen

In May Laquawn’s baby girl turned two. “She comes and celebrates her birthday with us, because she says if not for us she probably wouldn't be celebrating a birthday,” Giasson said.

Then Laquawn’s partner started attending a Bible study with the men’s ministry at the center. Now both he and Laquawn are active in a local church and plan to marry within the year. “The whole family is really just being restored,” Bicksler said.

She attributes such victories to prayer. Staff and volunteers pray when an abortion-minded client is in the office. But an additional force of 165 prayer warriors stands only an email away. “I wouldn’t want to be doing this without them,” Bicksler said. “They see the needs, they pray for them, they hear of the way God answers them, and it encourages them to be involved. It’s friend-raising.”

Freeport Pregnancy Center depends on only two fundraisers to meet its $100,000 budget: the annual Walk for Life and baby bottle campaigns. Those funds allow them to take their message of abstinence and sexual risk avoidance into schools and church groups—anywhere the doors open. Last fall the center brought speaker Jeffrey Dean to seven area schools, reaching about 3000 students.

Even while celebrating her center’s 25-year milestone, Bicksler knows battles loom ahead. She said, “The saddest thing that I have to inject here is that we're having less babies being born. We had a client tell us it's not that they're not getting pregnant, but they're taking the abortion pill.

“Our medical director is wanting to inform them about the results of the pill. They don't even know the side effects yet. If they don't understand that they have a baby within them and they're ending the life of that baby, we need to get this info out so they consider that before they take the pill.”

That realization hit Bicksler hardest as she surveyed the room where her volunteers prepare layettes to give new mothers. The layettes consist of gifts worth from $300 to $500. But now there are fewer mothers to need them.

Her center also faces the fallout from SB1564, a law slated to go into effect in Jan. 1, 2017. Under this legislation, pregnancy resource centers in Illinois would be required to discuss the “benefits” of abortion, and either refer or transfer the client to an abortion provider, or supply a list of such providers.

Still, Bicksler and her prayer warriors are resolute. “We are trusting as Alliance Defending Freedom and Thomas More Society and pro-life legal file lawsuits.”

Tweet This: "The most exciting aspect of the Freeport Pregnancy Center's 25 years is seeing God's faithfulness..." #prolife #prolifegen

“The things the enemy hates and the Lord loves—we're doing that,” Bicksler said. “When you see God bless lives and use people in that way, selfishly, I can't imagine the day when I'm not experiencing this on a daily basis.”

“And of course, the lives which were saved…the babies, the women and men who gave their lives to Christ and were forever changed.”