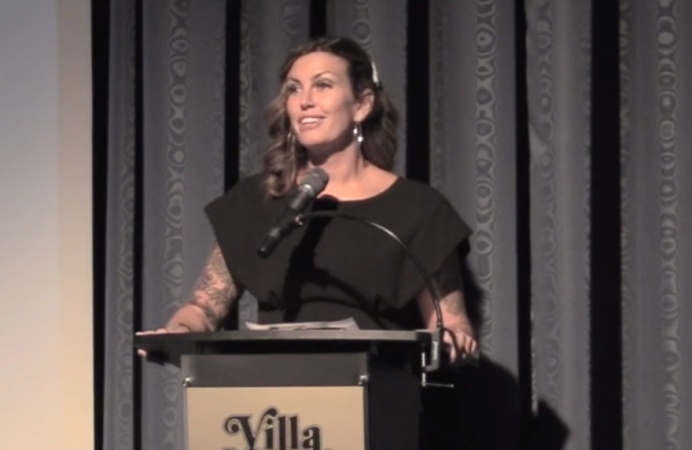 As a daughter, Kelly Lester checked all these boxes for experiences had, and added in four abortions, drug dealing, and being part of the abortion industry.

Today she has six children of her own and is determined to not see her own daughters and sons experience the pain, trauma, shame, and abuse she has endured.

Lester is a regular speaker at pregnancy help organization fundraisers and was featured at the recent Pregnancy Decision Health Centers (PDHC) gala in Columbus, Ohio.

She uses her story to benefit pregnancy help organizations related to understanding clients.

Lester was molested by a member of her extended family at age three. This led her on a path of shame that ultimately could have claimed her life.

Her parents were Christians, and her dad a pastor.

“In pregnancy help ministries we can suffer from compassion fatigue,” Lester said, and it is possible to miss a client’s deep-seated needs.

“They need therapy, getting to the root issue of why they are doing what they are doing,” she said of clients, touching on her own abuse, chaotic homelife growing up, and shame of the rape, further projected upon her by the insensitive words of a youth pastor.

All these elements were part of Lester’s life and the root causes leading to multiple abortions and the drugs, followed by working at an abortion facility to achieve a sense of stability.

“After many months of seeing the daily reality of what goes on in an abortion clinic, I realized that I was multiplying the chaos, not escaping it,” she said. “This was not a place to find hope, only more hurt.”

Lester commented previously to Pregnancy Help News about how the movie Unplanned captured her own story. Similar to how the movie’s main character had reviewed her own abortion file in the clinic where she worked, Lester had done the same.

Currently Lester is Outreach Coordinator for Pro-Love Ministries along with And Then There Were None, which serves abortion industry workers. She also is a client advocate for LoveLine Ministries and a board member for Village Ansanm: Living Stones Ministries.

Lester’s priority is her relationship with the Lord, followed by those with her husband and children. The Lesters have children ranging from ages 6 to 14, and they remain vigilant about where their children’s hearts are being led.

“Be in tune with the small changes in your children,” Lester advised.

Lester recalled that in her own life, each traumatic experience brought about changes in her that adults in her life should have noted.

After being molested at three years old she became withdrawn and began pulling her hair out. After she was raped at age 12, she began to dress differently, stopped playing tennis (she had been training six days a week and was nationally ranked), and her grades dropped.

With her powerful testimony, Lester reminds others that God brings beauty from ashes. Her experiences also inform her approach as a parent.

“Keep in mind that God is the perfect parent and yet Adam sinned,” she said. “But it is in your hands to raise your child. Don’t sacrifice our children to save the world.”

Her first of four abortions took place when she was 15, something about which, as with the rape and subsequent shaming by her youth pastor, her parents were unaware.

“It began my pursuit of something, anything, that could kill the pain,” she said.

“Before I knew it, there I was, the daughter of a pastor, running drugs from New York to Florida,” said Lester. “I got thrown in jail, was physically beaten in drug deals gone wrong, and had my car blown up by an angry supplier.”

Out of the chaos she began working at the abortion center where she had her first abortion.

In all it would be 15 years of running from God.

Nearly beaten to death by her boyfriend, God had spoken to her father’s heart showing him that Lester’s life was in peril.

Learning about her father’s encounter touched Lester deeply. She returned home and found herself in the church pew when she heard from God herself, saying to her, “Have you had enough?”

Lester thought, “But God, do you know the things I’ve done?”

“Yes, Kelly, but if you follow me, I will make beauty from ashes.”

Her work at the abortion facility was the last issue of healing she contended with and found help through the ministry she currently works for, And Then There Were None.

Today she tells pro-life advocates to love and pray for those in the abortion industry.

“They are deceived,” Lester told Canada’s Pro-Life Guys in a January 31 podcast.

Lester said one should treat them as we would want to be treated, love them and smile because, “If you’re going to be pro-life, look like you love yours.”

In a March 2022 interview Lester said chemical abortion “the most traumatic by far” compared to her other three (surgical) abortions.

She shared this information at the PDHC gala as well.

“How many of you have had a colonoscopy?” Lester asked the audience.

Noting the “twilight” sedation with the procedure is the same with surgical abortion, where one does not experience pain and forgets the encounter, Lester explained that this is how many women can initially set their abortion aside, disregard it and move on, often returning for more.

“It would be so much more traumatic if they realized what was going on,” Lester said.

The illusion of walking into an abortion facility pregnant and then simply walking out no longer pregnant masks the trauma, she said, and often means that post-abortion syndrome is not immediately recognized, delaying women from seeking appropriate help for years. Chemical abortion is changing this reality, Lester said, using her own experience as illustration.

“I was medicated during those other procedures and for this one I was not,” she recalled. “I was fully awake and fully conscious.”

“I had to deal with seeing the parts of the fetus,” she said. “And not only seeing it that day, but every time I would go back to that bathroom, I would have to relive that experience.”

Lester told the PDHC audience it is a continual “returning to the scene of the crime you simply are not prepared for.”

Therefore, while the battle changes in terms of chemical abortion becoming more prevalent, the war does not cease.

Lester hopes her testimony will encourage parents to tune into their children and pregnancy help workers to practice personal care to avoid compassion fatigue and press forward in loving and serving women in need.