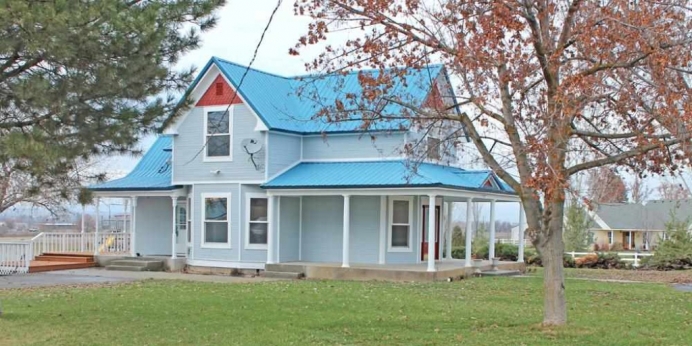 On a spacious acre of land on the outskirts of Boise, Idaho lies the brand new maternity home, “Gate of Grace.” The luxurious two-story residence that can house up to six mothers at a time, is set to open its doors the second week of September.

It all started while Daniel and Monica Gamboa were working with the homeless population in Boise.

“My wife and I for many years had an outreach to bring meals to the homeless in the alleys of Boise, Idaho” Daniel Gamboa said. “During that time, we noticed young girls that were pregnant. They would come back with their child and still be on the streets or come back without their child. We kept wondering why they were on the street and if there was an outreach for them. There were, but they were full or didn’t fit into the category of being able to stay there.”

Strong pro-life advocates themselves, it seemed simple enough for the Gamboas to encourage the women to keep their babies, but what would happen to them after birth? Where were they to live and raise their children? How could they get work while taking care of an infant? The obstacles of raising a child in such circumstances were enormous.

“We always encouraged them to keep the babies, but there was nowhere for them to go.” Gamboa said.

With the faces of these young women imprinted on their hearts, the Gamboas took their questions to the Lord. However, as Corrie ten Boom once said, “We never know how God will answer our prayers, but we can expect that He will get us involved in His plan for the answer.”

Within a week, an answer presented itself. The house directly across the street from the Gamboa’s residence quietly went up for sale. As they prayed further, they put a bid on the house and by March 2015, it was theirs. Soon after, they began making renovations to make their new dream a reality, a maternity home for impoverished young women.

Equipped with a garden in the back of the house, fruit trees, and 30 chickens to help pay the bills, Gate of Grace is also poised to provide a practical training ground for residents. Women ages 18-22, both during and after pregnancy will be welcome to live in the house for up to 15 months.

Beyond the farm living experience offered to Gate of Grace residents, the mothers can receive care from local pediatricians and OB-GYNs, and take advantage of financial and pre-natal classes. Moms who have yet to receive their high school diplomas will be encouraged to work toward a GED, while women already enrolled in college will be given the support needed to continue.

“The thing that really caught my attention about [the Gamboas] is that their family is so committed they started this house right across the street from their family home,” Mary Peterson, Heartbeat International’s Housing Consultant and the director of the National Maternity Housing Coalition, said. “In that way it’s a really personal work for them.”

The plan at the home’s outset is for Monica to head day-to-day operations while Daniel runs the financial operations, though in time they hope to find “house parents” who will live with the mothers on the premises.

“Often maternity homes really struggle with startup,” said Peterson. “The Gamboas have experienced a lot of grace in their founding. Their process has been fairly smooth. So many start-ups really struggle in the early days.”

Gate of Grace’s first fundraiser is slated for August 29, and the Gamboas have already seen 280 of the available 300 tickets sold, a true testament to overwhelming community support.

To begin the event, the bishop of the Boise Catholic diocese will give an invocation and bless the house. After dinner and a tour of the house, a live auction will be held with prizes such as a week’s stay in a cabin at a ski resort, a white water rafting trip, and even fly fishing lessons.

International Christian singer Jaime Thietten will give a performance at the fundraiser, and testimonies from successful men and women who were born in a similar maternity home will round out the night.

Now that the house is almost ready for women to move in, and local pro-life organizations have had the chance to provide input and tour the house, the Gamboas are waiting to see who God will bring.

“The Lord’s going to send us who He sends us,” Daniel Gamboa said. “It’s in His hands.”