Hijacking the 1939 classic, “The Wizard of Oz,” the group—led by former comedienne and one-time co-creator of Comedy Central’s The Daily Show, Lizz Winstead—painted the steps leading up to a Hartford, Conn. abortion clinic in bright yellow, posting a picture of the paint job with the message, “Follow the yellow brick road to a safe abortion provider.”

Evidently, in the minds of these activists, the abortion clinic—Hartford GYN, which has been aborting babies since 1981—is akin to the magical Emerald City.

That would make the abortionists inside a good parallel to the Great-and-Powerful Oz, promising to solve all problems and cure all ills—provided you buy into the idea that a child is a “problem” or an “ill” that can be solved or cured through abortion, that is.

Got a “problem”? No home? No heart? No brain? No courage? No worries, just follow the yellow-brick road and you’re off to see the Wizard. You’ll be back in Kansas in no time.

What Winstead and her team of abortion campaigners may have forgotten about the Wizard of Oz—possibly because they haven’t been spending much time with children lately—is that, when Dorothy, Toto and her trio of needy friends finally make it into the Wizard’s awesome presence, they come to find out that he’s a fraud.

Actually, this is an apt picture of abortion, which promises to cure all ills involved in an unexpected pregnancy by a single act. True, an abortionist is usually quite adept at ending the life of an unborn child, but when it comes to giving life, bettering life and cherishing life, his best advice boils down to the demand: “Pay no attention to that man behind the curtain!”

In the end, the Wizard couldn’t give anything to the travelers. The only thing he could really do was to help them draw upon their previously untapped giftedness. Hence the diploma for the presumptively brainless Scarecrow, the ticker for the affectionate Tin Man, and the medal of bravery for the plucky Lion, and of course, words to express the hope that lay in Dorothy’s heart all along.

When you think about it, this work of affirmation and empowerment sounds like a much better description of a pregnancy center than it does an abortion clinic, which promises “deliverance” at the cost of a mother’s child.

One such life-saving nonprofit, Hartford Women’s Center, is empowering women every day right next door to the abortion clinic at the end of the yellow-brick road. Rather than profiting off a woman’s fear and despair—the very business model of every abortion business from Oz to Kansas and everywhere in between—Hartford Women’s Center gives each woman it serves the chance to choose life and walk forward in confidence.

The pregnancy center, which has been serving Hartford women since 2006 on an entirely volunteer basis, is fully community-supported and offers free ultrasounds, pregnancy tests, material support, post-abortive help and more, all at no cost to mothers.

Unlike their next-door neighbor, which boasts that, “Abortion is 100 Percent of What We Do,” Hartford Women’s Center offers women real choice in the midst of an unexpected pregnancy, and it does so from a perspective of having been there. Leticia Velasquez and Caron Sheffield, the two main leaders of the center, both resisted intense pressure to abort their children.

“They think they have a position of being women’s champions,” Velasquez said of the abortion clinic next door. “It’s sad how deceived some of them are, but the truth is twisted into, ‘It’s me or the baby.’ We have to make her understand that life goes on. Life will be different, but life goes on with the baby and your goals are still reachable.”

Tragically, Judy Garland—who played Dorothy—was similarly pressured to abort just four years after filming “The Wizard of Oz.” Unlike Velasquez and Sheffield, however, Garland was unable to resist the crushing demand to abort from her husband and the leadership at MGM.

Garland, who died at the age of 47 after a truly heartbreaking life, said she was haunted by her “inhumane actions” the rest of her life.

“I tried my damnedest to believe in that rainbow that I tried to get over and I couldn’t,” she once said. “I just couldn’t.” 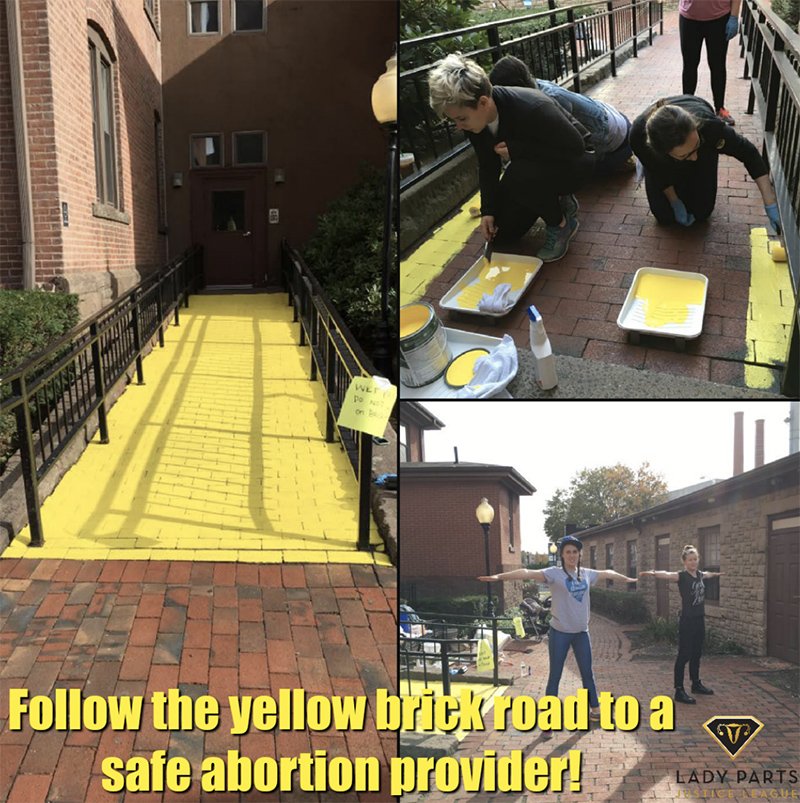