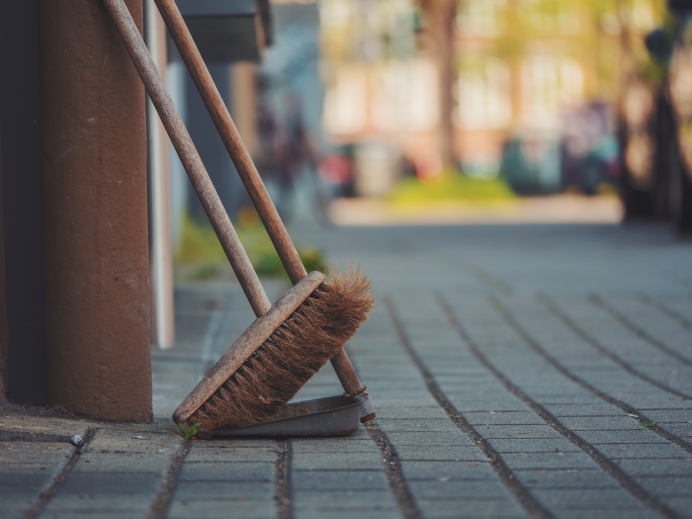 Duped by the interwebs: A lesson to remember

It’s never happened to me before. Not once.

I see plenty of false stories all over Facebook and Twitter, and I’ve learned not to trust what I read online until I can find several sources to verify the information. You’re not going to fool me.

Therefore, don’t send me a Facebook message telling me Microsoft is giving away $1,000 to the first million people to share your message on Facebook. Not gonna do it. And, if you tell me a child is missing somewhere, I’m going to double check. Because most of the “missing persons” Facebook stories are 5 or 10 years old.

My Facebook and Twitter reposting record was perfect (for those keeping track), until the other day. Here’s what happened:

Scrolling along through Twitter, a video popped up of someone placing a broom on the kitchen floor, then standing back as the broom—amazingly--stood on its own. Wow. In my 55+ years, I don’t recall seeing this. How does this happen?

Then, the explanation. Apparently, NASA made a proclamation that this one day—because of the unique gravitational pull—was the only day of the year one could stand a broom on end, on its own.

The skeptic in me came out. I had to at least check. I jumped out of my chair. As I bolted to the kitchen, the lovely Jenn questioned me.

I was on the verge of scientific discovery. I didn’t need useless questions.

“Just a second,” I told her. The experiment would have to be mine. All mine.

Yanking out our broom, I placed it on the floor. Stepping back and letting go, a miracle occurred.

The broom, my broom, stood by itself, aided no doubt by the unique gravitational pull of this one day in recorded history. And I was a part of this amazing moment. Jesus may have turned water into wine, but did He ever get a broom to stand on end?

I took pictures. Then, as the broom continued standing tall, I called for Jenn. My find no doubt, rivaled the invention of electricity. Or the telephone. Or Facebook.

We called in the boys. They were stunned. Their father was a genius.

Next, I had to post it on Facebook. Because, of course. If I’m a key player in a discovery which sets me apart from the commoners, I must announce this undeniable truth, post-haste.

After posting however, a thought struck me: “Hmmm, you’d think NASA would be trending on Twitter and Facebook. And, I haven’t seen anything on this today, nowhere in the news.”

My friend Google (Have you heard of it? Lots of information there) was my first stop.

I typed in something like, “NASA broom stands on its own” and waited .8393 seconds. And there it was, everywhere.

The first video I found was from 2012, eight years ago. In the clip, a TV meteorologist tells his viewers the whole thing is an internet myth. The truth? Anyone can stand a broom on end, anytime.

Anyone? Not just a Broom Stand-on-End Pioneer like myself?

I was crushed. Fortunately, my Facebook post was only seconds old, giving me a moment to cover my tracks. Thank the Lord for the editing feature.

Friends laughed with me, posting pictures of their brooms at attention. “Ha Ha” emojis popped up everywhere. My favorite was a friend who said, “Now if I can just get my broom to sweep on its own, too.”

Duping and the pregnancy help community

What shall forever be known as “The Broom Incident” started with a glance at social media and was over in fifteen minutes. But it taught me a lifelong lesson for the pregnancy help community: Let’s never allow ourselves to be duped by those who oppose us.

Here’s what I mean:

Almost every week, there is a new “study” or “report” put forth by the abortion lobby, with incessant ramblings about things like “false advertising,” “coercion,” you name it.

These offerings are often short on facts and long on straw-man arguments. We’re used to this.

“This really happened.” Or, did it?

Yet sometimes, these reports include an “actual conversation” with a volunteer or paid staff member at a pregnancy help organization. Often, the author of the report recounts her own alleged undercover investigation. We might read something like, “I went in to ask about abortion. The person behind the counter told me that having an abortion was a sin and I would burn in hell!”

When I see one of these reports, may I be honest enough to say that sometimes (not often, but sometimes) my first response is to cringe a bit? In these moments, my knee-jerk reaction is, “We need better training,” or maybe, “I wish our people wouldn’t say things like this—it hurts all of us.” Or even, “Most of our centers are nothing like this.”

Reactions like this mean that just like NASA and the broom, I forget I’m probably being played.

My first response should never be to question my teammates in this work. Never. It’s not to say accusations like this are always false—because we’re not perfect. But . . .

Why do I--for a second—think the abortion lobby, which routinely lies and obfuscates regarding our work, is suddenly a bastion for truth regarding interactions in our centers?

Why do I think that, just because an alleged conversation is in a “report,” it is an accurate, contextual account of what happened?

A brief Google search proved NASA never said a word about brooms and gravitational pull. Ugh. Someone on the interwebs almost got me.

Forgive me then, if, when the abortion lobby publishes another piece of “research” on pregnancy help centers, I do some checking before throwing my own teammates under the proverbial bus.

Tweet This: "Forgive me then, if, when the abortion lobby publishes another piece of “research” on pregnancy help centers, I do some checking .."

Because when it comes to those who defend the abortion industry, its “studies,” “reports” or “investigations” fall well short of the truth.

Tweet This: "Because when it comes to those who defend the abortion industry, its “studies,” “reports” or “investigations” fall well short of the truth"

Our best response then, is to grasp our broom and sweep out the trash. After all, our broom can stand on its own, anytime.