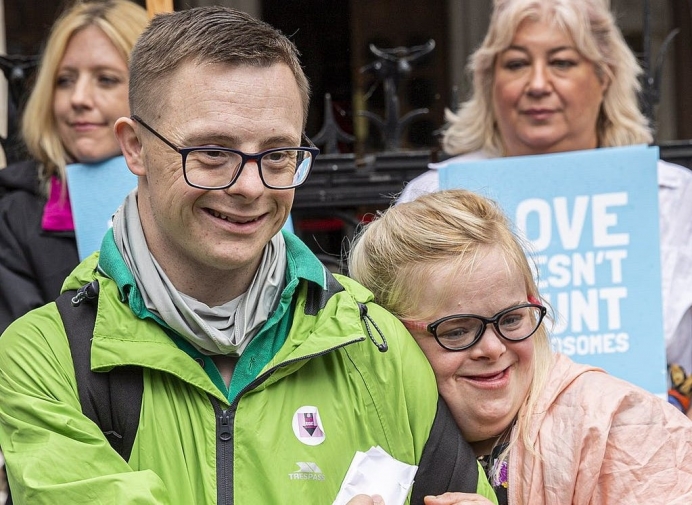 Discrimination in the womb

(The Critic) When I heard that the law allows termination of pregnancy up to birth for disabled foetuses, I felt as if someone had stuck a steak knife in my heart.

I have Down syndrome (DS), a condition caused by one extra chromosome. It means I have a learning disability. This is grounds for abortion up to birth according to the 1967 Abortion Act, Ground E (“that there is a substantial risk that if the child were born it would suffer from such physical or mental abnormalities as to be seriously handicapped”).

I think this is downright discrimination. It makes me feel that my life is not as valuable as anyone else’s.

I am twenty-six years old and live a very happy and fulfilled life. I moved into my own flat when I was twenty and only have support staff for twenty-four hours a week. I am married to James, who is twenty-eight and also has DS. Mutual friends put us in touch with each other in 2017, and we started chatting on Facebook. We eventually met in October 2017 and fell in love. James went home from our first date and wrote his wedding speech.

We learnt the train journeys from Coventry to Weymouth and vice versa and stayed weekends at our parents homes. Finally in December we got engaged and married on 4 July 2020. It was the best day of my life, even though we could only have thirty guests because of the pandemic. Then James moved into my flat in Coventry.

We both have voluntary jobs in a charity shop and in a café, which we really enjoy. I work on a Saturday at early development drama groups for children with DS. I love this and hope it is helpful and encouraging to the parents.

We love singing, dancing, going to church, the cinema and going on holidays. It’s very nice for us because James’s family live in Weymouth so we can have holidays there.

Neither of us feel that our lives are not worth living.

I wanted to do something about this law, so I started with educating doctors and midwives in breaking the news to parents both before and after birth. I hope that by doing this they will stop scaring parents with outdated and often negative stereotypes of DS. But I wanted to do more so I jumped at the chance when Lynn Murray (who runs Don’t Screen Us Out) asked me if I would like to take the UK government to court over Ground E abortions.

We contacted a solicitor, who was keen to help us, and we started the process back in February 2020. We had to raise lots of money to pay the barristers and the court costs. This came in from many generous people who felt that there should be equality in the womb. I was joined in my court case by Aidan, a two-year-old boy who has DS, and his mother Máire Lee-Wilson. She had found out at thirty-four weeks that Aidan had DS and was repeatedly offered termination

Tweet This: Many people felt that there should be equality in the womb

The court case was delayed by Covid 19, but we were finally given a court case date of 6 July so we travelled to London to the High Court. I didn’t actually have to speak at the court, which I was rather disappointed about — as I do like to talk! The barristers shared my statement. I only went to the first half hour of the court case, as it was really boring, and my mum thought I would find it upsetting. I did several media interviews outside the court.

Sadly someone at the court got Covid so we had to come home, and the second day of court was held online.

On 23 September we travelled to the High Court and heard that the judges had ruled against us. They said that the law is not discrimination against babies with DS or other disabilities and that it does not create negative stereotypes for people who have disabilities. Obviously I was very upset but I still managed to speak to the media afterwards. There were so many microphones being put in front of my face!

Tweet This: The Down syndrome community will not give up

This is the start of my speech:

We face discrimination every day in schools, in the work place and in society. And now thanks to this verdict the judges have upheld discrimination in the womb too. This is a very sad day but I will keep fighting.

When Wilberforce wanted to change the law on slavery, he didn’t give up, even when events didn’t always go his way. And when the going got tough, he kept going and I’m going to do the same because I want to succeed in changing the law to stop babies like me being aborted up to birth, because it’s downright discrimination.

As a Christian I thought about people in the Bible like Abraham, Moses, David and Esther, and I promised that I won’t give up either. I will keep trying.

It is a very hard and upsetting time for the Down syndrome community, but we will not give up.

Editor's note: Heidi Crowter is disability rights advocate. She campaigns for Don't Screen Us Out, challenging the UK's Abortion Act 1967 for discrimination against foetuses with disabilities. This article was published by The Critic and is reprinted with permission.