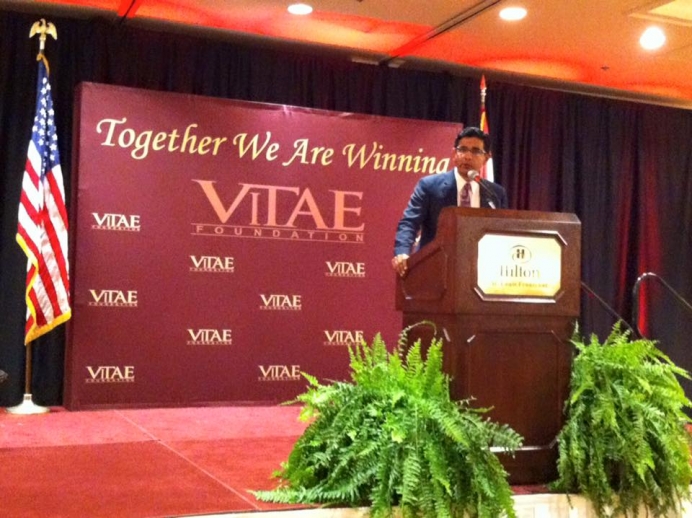 Conservative activist, filmmaker and author Dinesh D’Souza served as keynote speaker for the Vitae Foundation’s St. Louis pro-life event, telling the audience that while he is “not particularly a pro-life speaker,” he is inspired by the leadership of Vitae because the foundation “beautifully employs their research and facts through media and it is allowing the voices for life to be heard.”

Vitae bills itself as “Bringing media to life.” The foundation, formed in 1992 in Missouri, now collaborates with more than 80 pregnancy help centers across the country on messaging and strategic media.

Ultimately, Vitae’s mission is “focused on creating a Culture of Life by using research-based messaging and cutting edge media to inform women facing an untimely pregnancy about local Pregnancy Help Centers; educating the public about the value and sanctity of human life; and restoring the value of life as a core belief in the American culture.”

D’Souza, well-known for his documentaries America and 2016 and the author of Stealing America, told the audience that while the abortion community has its celebrities and politicians who often have a larger megaphone for their message, Vitae, through its media work, helps to balance the playing field.

“Vitae takes two things that are somewhat different,” D’Souza explained. “They use research, which is knowledge and gathering facts, and media. Being able to deploy this information in a culture that is pretty hostile to the pro-life cause and get it to the people who need it is a powerful combination of research and media. I see Vitae on the front line of the pro-life movement for that reason.”

Veteran journalist Chuck Neff, host of The Inner Life on Relevant Radio, was Master of Ceremonies for the event, opening the evening by sharing a story of his work producing Vitae’s first television ad. During auditions to find the right pro-life actress, Neff asked one candidate about her stance on abortion.

Tweet This: “I used to be #prochoice, and then I had a baby.” #prolife #prolifegeneration

“I used to be pro-choice, and then I had a baby,” she told Neff. “I realized all this kid was trying to do was make it just like you and me.” In that moment, Neff had his lead actress and the main idea for the ad.

The event was one of many for Vitae this year. Carla Fiorina will headline Vitae’s Kansas City pro-life event on September 9, with Allen West keynoting a DC event on October 6. Mike Huckabee will be keynote speaker for Vitae’s final event of 2016 on Oct. 28, in St. Joseph’s, MO.