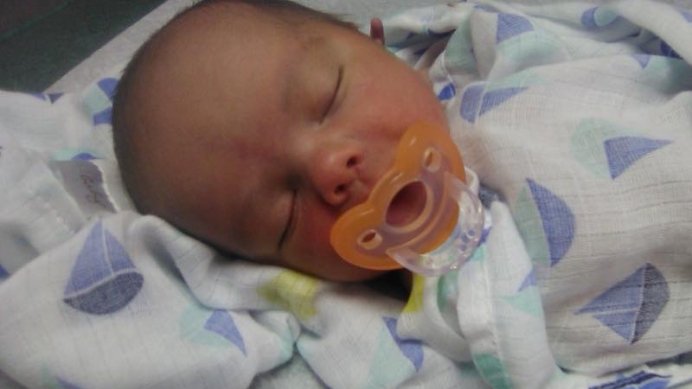 Courageous Teen Mom Changes Her Mind After Considering Safe Haven: “I can do this, I can raise a baby."

It was 8 p.m. when a hotline call lit up the phone of Heather Burner, executive director of the National Safe Haven Alliance, in late August.

“Madison,” the scared, young girl on the other end of the phone, was nine months pregnant, expecting to deliver her baby within just a couple weeks, and did not feel she had the resources or support to parent her child.

Still in high school and with a boyfriend who told her to choose “him or the baby,” Madison was at a loss for what to do. Finding a designated “Safe Haven” location for her soon-to-be newborn son seemed like her only choice.

Since 1999, Safe Haven laws across the U.S. have allowed mothers to hand their babies to hospital staff or other law enforcement personnel anonymously, depending on the state. Burner’s organization, the National Safe Haven Alliance (NSHA), exists to increase awareness of the Safe Haven option as a preferred alternative to unsafe abandonment. But Burner says their first hope is to keep mothers and babies together.

After establishing a sense of trust with Madison, Burner was able to help do just that.

“One baby, one momma, one lost soul at a time.”

As Burner provided Safe Haven information over the phone, she asked if Madison would be willing to discuss other options. Reluctantly, Madison agreed to speak with pregnancy help center staff and an adoption counselor.

“I was able to establish a small amount of trust that allowed me to remain in contact with the young mother in hopes that by standing beside her and listening to her fears, she would not feel as alone,” Burner said. “The mission of NSHA is to walk beside a woman or parent that is in the most frightening and desperate situations, encouraging them by removing the fear and providing the glimpses of hope that come along with information and love.”

Working with a statewide Safe Haven non-profit group from Madison’s home state, Burner was able to connect with local resources, including a pregnancy help center and adoption agency.

But even after considering her options, Madison still felt that Safe Haven was the only choice for her. Fortunately, she kept in intermittent contact with Burner, updating her on her situation and seeking further advice.

As Burner encouraged Madison to talk to her family, Burner finally received a much hoped for text. Madison had spoken with her mother and sister about the large decision that had been weighing on her mind. To her relief, her family stepped up, offering her the acceptance and support she needed to actually consider raising her child for the first time.

As for her boyfriend’s ultimatum, she now felt empowered to choose her baby, leaving him behind.

“There was the picture of a brand new miracle,” Burner said. “A baby boy, perfect in all the snuggly ways, the precious blessing that had been there all along.”

Madison’s message said, "I didn't think I would be able to handle this but turns out that I surprised myself and I can do this, I can raise a baby."

“As I sat with the tears streaming down my face, I was once again reminded by the One who orchestrates all for His good,” said Burner. “That we are changing the world, one baby, one momma, one lost soul at a time.”

Tweet This: "I didn't think I would be able to handle this but turns out that I surprised myself and I can do this, I can raise a baby." @SafeBabyHaven

As previously reported at Pregnancy Help News, Burner’s involvement with the National Safe Haven Alliance began eight years ago when she was working as a pediatric emergency room nurse. One day, tragedy struck when Burner’s co-worker found a newborn in a garbage can in the emergency room bathroom.

Although Burner and others performed CPR, they were unable to save the baby.

Following the pivotal moment in the emergency room, Burner began volunteering to help spread awareness of Safe Haven laws, and eventually made her way to the role of executive director of the National Safe Haven Alliance last year.

Since the first Safe Haven laws were first enacted in individual states in 1999, birth mothers have rescued over 3,600 newborns through Safe Haven laws. Option Line, Heartbeat International’s 24-7, 365 pregnancy helpline which has answered calls to the National Safe Haven Alliance (888-510-BABY) for more than a decade, receives about 20 Safe Haven-related crisis calls per month.

“Each of us have a story, I am just blessed in this calling to be a part of stories that include miracles,” said Burner. “This is what love looks like, walking with the broken and allowing Jesus to do what He does.”

Stories like Madison’s and her own are the reason Burner continues her work promoting awareness about Safe Haven laws across the country. This month, in Austin, Texas, she hopes to reach yet more first responders, in and beyond the pregnancy help community, at the National Infant Abandonment Conference on Saturday, October 13.

There experts will provide education and best practices on preventing infant abandonment, equipping fellow advocates with the knowledge and awareness to help parents in their most desperate moments.

It is, after all, with such knowledge and awareness that desperate moments can turn into hopeful ones.

Now, Burner is seeing the ripple effect of her work with Madison, as Madison blossoms as a new mother.

Following her baby’s birth, Burner sent Madison a box filled with stuffed elephants, a crocheted cap and booties, a "Love Box" from Embrace Grace, and a bracelet with the words “Be Brave” on it. She also included a handwritten love note. Since receiving the box, Madison has connected with a local Embrace Grace leader who is now walking alongside her as well.

When Madison last texted Burner, she said she plans to give another young, pregnant girl a book from Burner’s box, A Bump In Life, in hopes of walking with her on her journey.

“Oh, watch God go!” Burner wrote in an email to Pregnancy Help News. “When we give pure love, it spills over and the reach is endless.”

Today, Madison keeps in touch with Burner, sending her pictures and updates as she and her baby boy make their way through uncharted territory.

“I do not lie to her, telling her this journey will be easy,” Burner said. “Instead I send her pictures of my children and grandson and share my broken story. In the end, I tell her, it is all worth it. The broken heart you have at this moment will heal and will be filled with the blessing she has now been given.”