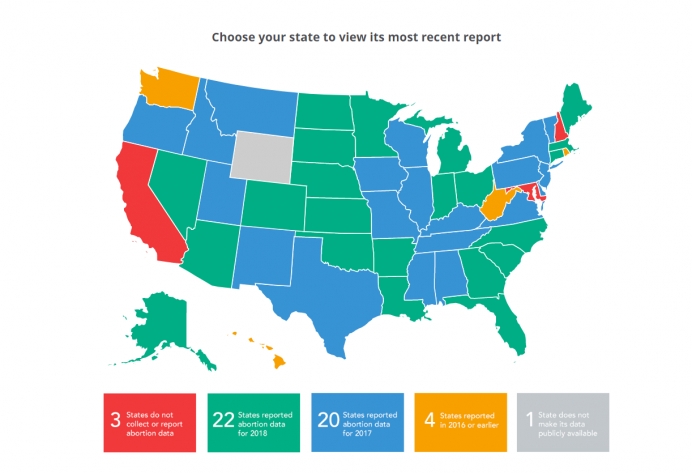 “This groundbreaking State Abortion Reporting Map brings together Charlotte Lozier Institute’s comprehensive state abortion reports into one easy-to-use tool for our friends in the pro-life movement, researchers, journalists and policymakers," CLI President Chuck Donovan said of the new online resource. “The need for this map is great: with Center for Disease Control and Prevention (CDC) reports lagging nearly four years behind, CLI has done the research into abortion trends in the states using the most recent existing state data and compiled it in a single place.”

Tweet This: “The need for this map is great: with Center for Disease Control and Prevention (CDC) reports lagging nearly four years behind”

National abortion reports are compiled and published in the United States by the U.S. Centers for Disease Control and Prevention (CDC), the Institute explains, with states voluntarily collecting and sharing their data for inclusion in the annual CDC reports.

The CDC reports are incomplete, according to CLI, the research and education arm of Susan B. Anthony List, as there are some states, such as California, Maryland and New Hampshire, that opt not to participate.

Further, the group said, national reporting is out-of-date, with the most recent national abortion surveillance report including data from 2015.

“With no national abortion reporting mandate, it falls to states to voluntarily collect and aggregate data for the CDC, which means data is scattered and hard to find," said Tessa Longbons, CLI Research Associate. “With CLI’s new State Abortion Reporting Map, we make it easy to find where reports exist and where there are gaps in the data. As evident from the map, there are some states that are woefully behind in their abortion reporting data, while others like California do not collect or report data.”

The map's data is dependent upon the individual states' reporting, and consequently the three states that neither collect nor report stats, as well as others whose information is one or more years old, is reflected in CLI’s State Abortion Reporting Map, specifically: