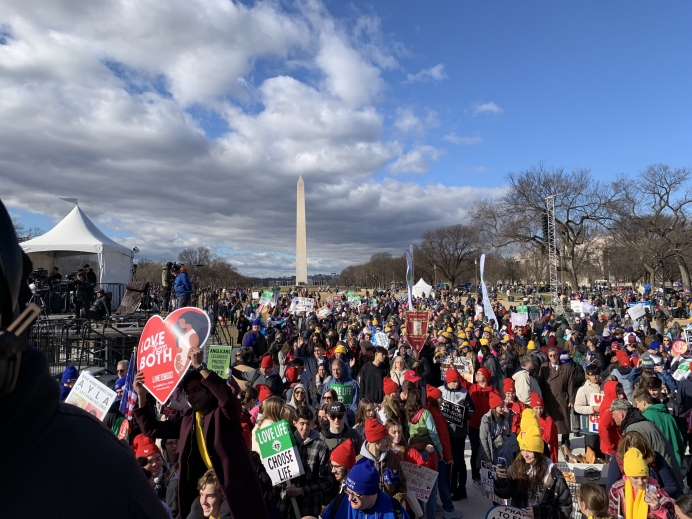 What was new, and not, at the 2023 March for Life; celebration, preparation.

This March for Life was not my first, but it was the first one for all where Roe v. Wade was no longer in effect. But many of the people I marched with were there for the very first time. It was interesting being on the other side and getting to witness both of these two firsts.

The one thing that always astounds me about the March for Life is the diversity. Apart from the numbers, the faithfulness of the March-goers to continue showing up year after year, the dedication to spending hours on your feet over lunchtime, it’s the diversity of the people present that always prompts for me a little wonder.

At the March for Life every age group is represented; there are high school students who come on buses, college students, young adults, grandparents, babies, and little kids.

Then you have the political spectrum and religious spectrums covered. Everyone from Secular Pro-life to Knights of Columbus is present, and progressive pro-lifers walk side by side with conservative ones.

Families are there, single people, friends, couples, large groups through an organization, coworkers, and other relational groups are all found represented.

The first-timers I attended the March with this year were coworkers and friends to the women from the Babies Go To Congress team I was on. Seeing their reactions and hearing their questions brought back to me my first experience.

One coworker had tons of questions about how the students got there.

Explaining to her the very real possibility that these students bussed here overnight to join the March and would bus back home the same day blew her mind. She was getting her first taste of how huge the pro-life movement was. It reminded me that I was not always aware of the existence of the pro-life movement or of the pregnancy help movement.

While I was essentially pro-life by default growing up, it was not until 2017 or so when I really started to think more about the issue of abortion for myself, examine the pro-life and pro-choice arguments, and decide that yes, I really was pro-life. Around that time I was also exposed in multiple ways to the greater pro-life movement and in 2018 with my employment at Heartbeat International, I became much more aware of the scope of the pregnancy help movement.

Seeing my coworker’s eyes grow huge at the sight of a gaggle of teens in matching t-shirts and pom pom winter hats reminded me of the wonder, excitement, and questions I first had when entering into the pro-life and pregnancy help movements.

Both the staff members and *Kylie from the Texas Babies go to Congress Real Options team were attending the March for the first time, too.

After the previous full day of walking all over Capitol Hill sharing her story, Kylie was awake and ready to March, bringing three of her children with her. We all walked together to the rally and then I made my way to our Heartbeat International meeting point. Let me tell you, managing multiple
strollers at the March for Life is not the easiest job in the world.

One of the Real Options staff remarked on how many people there were, and another noted there were a lot of people handing out various pro-life pamphlets and signs.

While waiting with me and other Heartbeat staff at our meeting point for the March, Kylie and the Real Options staff got to talk to a lot of different people, and I was able to play with Kylie’s beautiful children.

Pro tip: climbing up and down low walls lining the sidewalk and stomping on metal grates in the sidewalk provides tons of entertainment while waiting for the March to start.

I noticed that the atmosphere of this March was a little different from my previous experiences.

In the past, there was always an attitude of expectation and preparation. We were going to be the post-Roe generation; we just knew it. The focus was not only on overturning Roe v. Wade but also on what we could do in the meantime to make abortion unwanted and unnecessary if we couldn’t make it illegal.

This year, though, the atmosphere was far more celebratory. People were excited and happy. There was a feeling of almost relaxation that I observed, too. A great fight had been won. We could revel in that. Yet there was still an aspect of preparation, too.

We know that our fight is far from over.

The overturning of Roe did not make abortion illegal; it merely allowed states to make the decision themselves.

Many states have decided to codify abortion in their laws or constitution. But other states are strengthening their pro-life legislation and are working on recognizing fetal personhood in their constitutions.

Pro-life people know that pregnancy help will always be needed because pregnancy will never stop happening. And as long as pregnancy is happening, there are going to be women who, no matter the law or the social safety nets in place by state and federal governments, are going to consider abortion for a multitude of reasons.

Tweet This: Pro-life people know that pregnancy help will always be needed because pregnancy will never stop happening.

The work we have yet to do to offer support and hope to these women does not negate our victory, though. Our celebration and our continued work can happen hand-in-hand, and that is what I saw happening at the March this year.