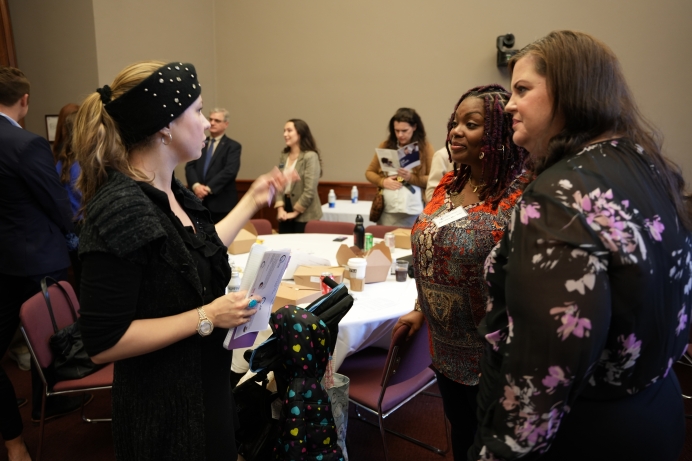 (CNSNews) On January 19, 2023, mothers and their little ones took to the halls of Congress as part of Heartbeat International’s annual three-day event, “Babies go to Congress,” to speak about their experiences when choosing life for their babies. The atmosphere was centered around responsibility, personal accountability, change, celebration of life, faith, and the grace of God.

Three mothers took to the podium in the Capitol -- their children looking on from their seats, or running around and playing -- to share the experiences which brought them together that day. Danielle Nicholson, Kandice Morgan, and Evalynn Hairston spoke about the trouble they had faced in their lives up until they got pregnant, and how they feared for their future as they faced the reality of pregnancy.

The great difference in how these women dealt with their life hardships, anywhere from unfinished education to sexual abuse, drugs, and prostitution, was made by the help they got through the work of pregnancy centers and maternity homes.

Evalynn was working in “high-end” prostitution when she got pregnant with baby Hezekiah, and was already the mom to a three-year-old baby boy. She had decided to get an abortion. But as soon as she saw the ultrasound at one of the pro-life Women’s Center in her home state of Ohio, she chose life.

What followed should have been total ruin and captivity to motherhood, according to the modern narrative. What really happened? She soon found spiritual freedom in Christianity, earned her bachelor’s degree, and married a man loving and supportive enough to help her with her emotional struggles and raise her babies. She has two beautiful children and is living a life, as she observed, she could not have pictured before.

Kandice was already a mother to a celebrated baby before she found out she was pregnant with Zoe shortly after. It came as a surprise to her that this time her support system seemed to have vanished, and everyone was urging her and her boyfriend to get an abortion. She found the familial-like relationships and support she was missing at Real Options, in her home state of Texas, where she felt free of judgment and could truly look at all of her choices.

Baby Zoe is now a happy little toddler. And her mom? She is living daily with gratitude and keeping in touch with the people who informed her of her options and helped her through the process. She just got hired for a job she had been dreaming of for a while.

Danielle found herself pregnant at 20, in the middle of a life of alcohol and drugs. Her family did not want to support her and she was penniless. She noted that she did not have much ambition at that time in her life. But with this baby came a great desire to succeed, as life was no longer just about her.

She notes for Heartbeat International: “So many women resort to abortion because they think it’s their only option, or that their baby will hinder their goals. I wish I could comfort those women, and tell them how keeping my baby motivated me to achieve every single goal that I set my mind on. I’d tell them that I named my daughter Lei’Lani, which means royal child of heaven. Why? I tell anyone who will listen – God sent her to me to save my life.”

These organizations were there for them, offering valuable resources, from information and education about pregnancy and parenting, good medical care, to housing in maternity homes, where they could live for as long as they needed to so they could get back on their feet.

The crucial part in all of this is that these pregnancy centers offer help not only as long as the woman is pregnant, but also after the baby is born and even throughout the child’s life. Indeed, many of these women stay in touch with the organizations for years after they initially sought help.

It was surprising for me to notice the relief in these mothers’ voices and confessions, as if no other place in society, not even their families, had offered them understanding for choosing life. These are women who are not comfortable speaking to most people in society because they chose NOT to kill their babies and because of their religious beliefs.

As I have written before, this “right of life and death” with which a woman is burdened nowadays is only causing harm to all sides. A woman is a mother the moment she gets pregnant. The only choice remains whether she will be the mother to a living or a dead child. All too often attention is brought to the grief suffered by those who have to face the result of nature making this choice, and their grief is legitimized in the eyes of society by their desire to have the baby. But not many talk about the trauma behind abortions, and how much harm they can bring.

Except for the situations when the mother’s life is in danger (or, rarely, cases of diseases incompatible with life) which does not make the experience any less painful, abortion is never the only choice, and it is no choice at all when everyone around has already made it for you, and intentionally kept you in the dark about any alternatives. In pregnancies far along, it is generally safer both mom and child for the baby to be delivered rather than aborted.

Attacking pregnancy resource centers, threatening to shut them down, ridiculing or threatening those who chose life for their innocent children even if they were conceived in a traumatic way, crushes women spiritually. It makes slaves out of them, slaves of grief and pain, either felt or repressed. It does not bring freedom, but oppression.

Tweet This: Attacking pregnancy centers, threatening to shut them down, threatening those who chose life does not bring freedom, but oppression.

From a Christian perspective, they are captive in sin (understood from my Orthodox perspective as an illness of the soul which plunges the heart into the abyss of sorrow, for which one needs a physician, not as an offense against an insulted God) and unhappiness. From both the psychological and biological perspectives, they add another trauma to the ones they experienced leading up to the pregnancy.

No one claims that raising children is easy. It is difficult. But the reality of the matter is that life is not easy. It is messy, it is traumatic, it is violent and unfair, it is cruel and unforgiving, and it will rip you apart if you do not find the right coping, acceptance, and healing mechanisms.

Nowadays, the pro-choice narrative is only one choice: “Kill your child or be ruined forever.” There is no talk about the risks, regrets, alternatives, or support systems which exist for women to get out of the experience feeling truly liberated from fear, guilt, and heartache.

We must not allow linguistic hijacking to dictate our lives and future. Propaganda and its oppressive intent must not be allowed to influence us. There are options. There is hope and there is help. Abortion is not the only choice. Take a deep breath, have a seat, turn on that computer and search for pro-life alternatives. As my father always says, “don’t let your memories be called regrets”. If you are pro-choice, then exercise that right to options by looking into all of them. Keep an open heart and an open mind.

Editor's note: Georgiana Constantin-Parke is the Commentary Editor for CNS News. This article was published by CNSNews and is reprinted with permission.