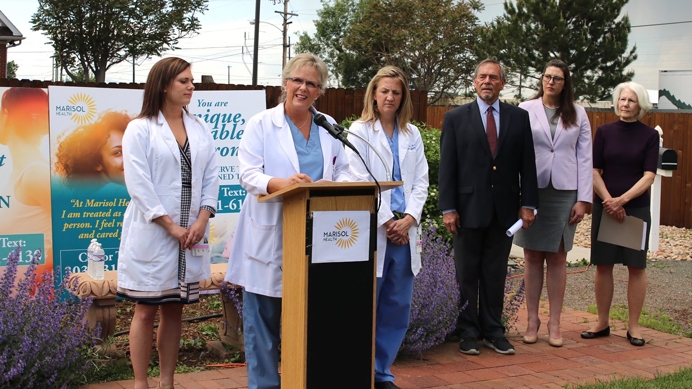 In a press conference at the end of May, Marisol Health threatened ProgressNow Colorado with a lawsuit for defaming the pro-life medical clinic in a video smearing pregnancy help centers. Photo Courtesy: Marisol Health Facebook

On May 17, Marisol’s attorney Michael Norton of the law firm Thomas N. Scheffel & Associates, sent a letter to ProgressNow Executive Director Ian Silverii demanding that Marisol’s name and image be removed from the defamatory video within three days. To date, ProgressNow, a self-described promoter of “progressive ideals” including abortion on demand, has responded with utter silence.

While the video originally hit social media over a year ago, it only appeared on Marisol’s radar in connection with a recent billboard campaign that labeled pregnancy help centers “fake clinics.” The dozen or so billboards were scattered across Denver by COLOR, a pro-abortion ally of ProgressNow that also embedded the defamatory video on its own website.

Making matters worse, in what Norton described as irresponsible “drive-by reporting,” the local FOX station aired a report on the billboards and included an emailed comment from Marisol Health, implying that it was one of the “‘fake clinics’” the billboards warned of.

“It takes a lot of time and effort to build up a good reputation,” Norton said. “But it doesn't take long for others who want to destroy that reputation to do so—in this case, by false statements about what Marisol Health does and how it does it. Contrary to suggestions by ProgressNow, Marisol is a full-service, comprehensive women’s health care facility.”

To Marisol’s knowledge, no one from COLOR or ProgressNow has ever visited either of their facilities in Lafayette or Denver to collect facts, despite an open invitation for a tour offered on the clinics’ website.

A visit to Marisol would have revealed the clinics’ partnership with Bella Natural Women’s Care and Family Wellness, which allows the clinics to provide a full spectrum of women’s medical services ranging from OB/GYN and prenatal care to STD testing and treatment to infertility care.

However, Norton pointed out, ProgressNow did not make the video in an effort to publish actual facts but “in support of an extremist political agenda, which stands for the proposition that if an organization such as Marisol Health does not perform abortions, it cannot be a legitimate health care provider, which is, of course, totally false. Abortion is not health care.”

“We’re not going to let reproductive healthcare for women be redefined,” she said. “We want to talk about providing what women really deserve: a clinic that is staffed by licensed clinical professionals, that offers true, compassionate care and human services if that is a need on their part.”

Tweet This: “We’re not going to let reproductive healthcare for women be redefined." #prolife @kinglewrites

The video makers also failed to mention that as a program of Catholic Charities of Denver, Marisol can “tap into the full continuum of care services that Catholic Charities already has in place: from housing for people who may be experiencing homelessness to clinical counseling that we can refer them to in-house,” McIntosh said.

“We have Early Childhood Education services; we have services to support families caring for their kin; we have adult services,” she added. “So when people come in we're looking at the whole person and what their needs are.”

Of the women Marisol Health served in fiscal year 2017, almost half have either no income or incomes less than $15,000 a year. And most of them have multiple needs in addition to pregnancy. With one-stop access to Marisol’s multidisciplinary team, these patients receive help they would be hard-pressed to obtain elsewhere.

To McIntosh, the 1800-plus unique patients Marisol Health has served in just under two years prove the value of their services.

“Since word of mouth is how most people hear about us, that’s a testament to the quality of work we do and to the positive experiences women are having,” she said.

McIntosh added that the smear campaign has actually proved “energizing” for personnel at Marisol and Bella as they have reviewed the truth about their services in contrast to the video’s lies. Despite the circulating libelous claims, patient exit surveys continue to yield a 98 percent “strong positive” experience rating. And patients and community members alike have voiced positive feedback on Facebook, by mail, and in person.

Yet these are the people ProgressNow warns will receive “fake” care at Marisol.

The Marisol team hopes further legal action will not be necessary, though it is prepared to pursue litigation if needed.

“The key concern for Marisol Health and Bella and Catholic Charities is: ‘Have we done all we think we should do in a responsible corporate way, from the standpoint of our mission, our ministry, our support friends, and our donors, to reclaim, restore, and rebuild any harm to our reputation that was caused by the ProgressNow posting?’” Norton said.

“If they conclude that we have, then that's all we'll do,” he said. “If more needs to be done, we're likely to see more action down the road.”

Norton explained that his client can afford to wait for “the wrongdoer to take the action” demanded of them, since the statute of limitations on libel doesn’t run out until one year from the last date of the offending material’s publication. So as long as Marisol is included in the video and that video is viewable online anywhere, ProgressNow remains vulnerable to a defamation lawsuit for yet another year.

Meanwhile, McIntosh said, her staff is concentrating on serving patients.

“We try to focus on the good work we're doing,” she said.”It has helped us be even more committed to making sure we are telling our story as best we can in the community, and as broadly as we can, to all the women and families who could benefit from our services.”