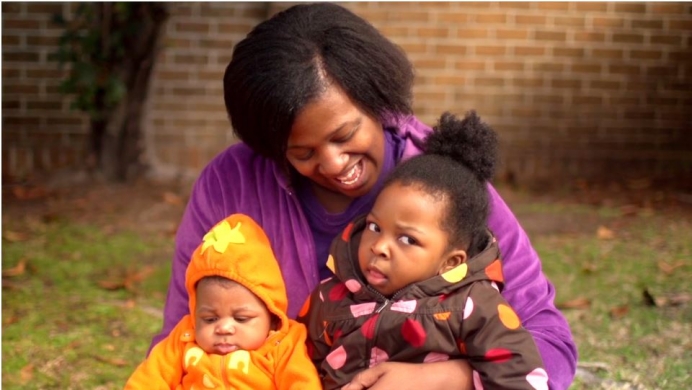 A single mother in her mid-30’s, when Tamika found out she was pregnant, she turned to a trusted community partner in Charleston, S.C.

Though she was reaching out for help in her immediate situation, what Tamika found at Lowcountry Pregnancy Center went beyond temporary help to a sense of family—a family she has grown to deeply rely upon during the past year.

Situated less than 15 miles from Emanuel African Methodist Episcopal Church, where nine worshippers were murdered in a shooting June 17, Lowcountry has been a haven of sorts for Tamika during a season in life where she has encountered an unexpected pregnancy, lost her eldest daughter in a separate shooting, and lost both a family member and friend in the June 17 incident.

The time has proved so trying that, even as she was set to give her testimony at Lowcountry’s annual banquet in March, Tamika was involved in an automobile accident that landed her in an intensive care unit the day of the event.

“It’s been one terrible thing after another over the years for Tamika,” Faye Hill, Lowcountry’s president, said. “She’s been so thankful for us as support. When she has a problem she calls us. It speaks volumes that she knows we're here for her. We’re here to help in any way.

“It’s not that she has physical needs, it’s more the support and love and advice to help and support and care and deal with the tragedies in her life.”

Tamika’s experience with the life-affirming organization that serves 3,000 clients per year with medical, sexual health and educational services began when she made a visit to Lowcountry, overwhelmed with the thought of another child and leaning toward abortion as the only answer.

Struck by the non-judgmental care, compassion and help the center was offering, Tamika was empowered with true choice from the moment she stepped foot in Lowcountry.

“A counselor ministered to me about adoption and abortion, and at that point I was basically at a loss,” Tamika says in a video testimony recorded for Lowcountry’s annual banquet. “I told her I didn’t want to keep the baby. We went from the little counseling room to the lady who did the actual ultrasound, and it was crazy because I sat and talked with her a long time. She made me feel complete. She made me feel like I mattered. She didn’t rush me.

Tamika’s trust in the center has helped her through not only the birth of her son, but the murder of her daughter and then the loss of family in the tragic shooting in at Emanuel African Methodist Episcopal Church last month.

As Tamika has found, pregnancy help organizations do more than just minister to parents—they can be a fixture in the community to help provide counseling and help in times of tragedy, too.

“I believe that it shows we’re an established ministry in our community that our clients can trust,” Hill said. “Our clients know they can come to us. We have a reputation that we love and care for people. Our primary mission is reach women at risk for abortion and also to share the gospel of Jesus Christ with them. So many times after that happens, we’re able to help in other areas of their lives.”

Within a few months of Tamika’s first appointment to verify her pregnancy, her oldest daughter was killed in a nightclub shooting.

A month later, after she was discharged from the hospital still injured, Tamika returned to the pregnancy center. She was still heavily grieving the loss of her oldest daughter, Hill said.

At that time, Hill referred her to her husband, who is a pastor with experience in grief counseling at an area church. She also enrolled in Lowcountry’s parenting classes to help cope with her loss and stay focused on raising her children.

“She was just so inundated with murder around her,” Hill said. “She said she just felt like there was no hope. Everywhere she looked around here there was murder and she felt overwhelmed. She contacted us — distraught, and we were able to pray with her and minister to her through the grief.”

Tamika will have to travel to another county to attend the trial related to her daughter’s murder, Hill said, and the center is giving her gas and restaurant gift cards to help her attend the court case.

More than a month after the shootings at Emanuel African Methodist Episcopal Church, Hill said the community is still coming together crossing racial lines and denominational barriers that aren’t commonly crossed.

“It’'s just amazing to see what the Lord has done,” Hill said. “What Satan has intended for evil, God is using for good. The important thing is that the whole nation and world has seen is the act of forgiveness.”