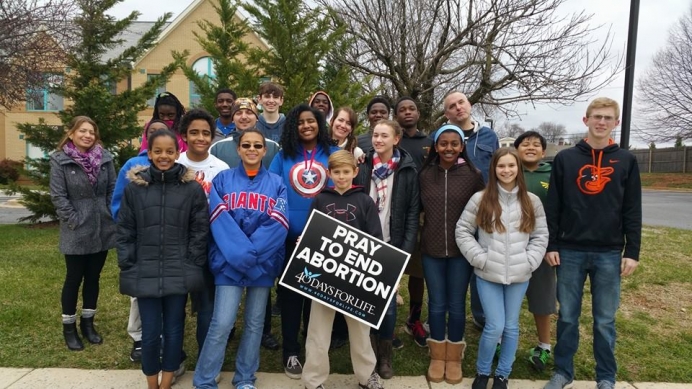 During the week, Carhart’s clinic aborted babies in the first and second trimester of their mothers’ pregnancies. But late-term abortions always began on the Lord’s Day. Photo By: Lucy Monroy

Carhart Was Aborting Fully Formed Babies on the Lord's Day. We Couldn't Keep Letting That Happen.

In 2015, our family moved to central Maryland, where my husband was stepping into a new role as the youth and young adult pastor at Greenridge Baptist Church. As we met members of our new church family, I was horrified to learn what was happening less than four miles away.

LeRoy Carhart flew in every Sunday to end the lives of unborn babies just months or weeks from their due date. Along with clinics in California, Colorado, and New Mexico, Germantown Reproductive Health Services performed third-trimester abortions. Even a woman in her ninth month could end her child’s life through abortion if there was a fetal or maternal health indication.

When I say “health indication,” you need to understand that category includes the stress and anxiety of the mother. The anecdotal consensus among sidewalk counselors and a neighboring pregnancy center said 75 percent of the babies were perfectly healthy.

During the week, Carhart’s clinic aborted babies in the first and second trimester of their mothers’ pregnancies. But late-term abortions always began on the Lord’s Day.

As many of us enjoyed Sunday meals, LeRoy Carhart injected Digoxin into babies’ hearts, causing each little one to suffer a fatal heart attack—a procedure Carhart described as “painless.” Of course, adults who've experienced a massive heart attack describe them as not only painful, but terrifying.

After causing a deadly heart attack in the baby, Carhart would give the child’s mother a drug to induce labor. Within four days, she delivered a dead boy or girl—often at a nearby hotel.

All of this was happening week after week, just down the street from our dinner tables each Sunday.

My husband and I couldn't sit idly by while these children were being murdered 10 minutes away. During 40 Days for Life in March 2016, we took some of the youth with us to pray and carry signs on the main road near the clinic. That chilly Sunday afternoon, we left Carhart’s clinic just as he was due to arrive.

When we got home, my husband, Mark, reflected on our initial outing to the clinic. “It was a weird feeling standing in front of a place where I knew babies were going to be killed later that day,” he said.

“Shouldn’t I stop him?” Mark had asked himself. “What if the baby was born today and tomorrow the woman came for the ‘doctor’ to kill it? Wouldn’t it be our civil duty to save that child? How is it different today?"

Over the next year and a half, we continued to partner with the community that had been trying to stop these abortions since Carhart started performing them in 2010. We brought the youth and some youth leaders back for two more peaceful 40 Days for Life protests. We prayed, we blogged, and we participated in fundraisers for pregnancy help organizations.

"But what can else can we do?" we asked each other. "Should we show up at the clinic and offer to adopt a struggling woman's child? Should we try to connect these women with infertile couples who long for sons and daughters?"

Soon, God gave us an answer when local pastor Charlie Baile called a meeting for 40 pro-life community leaders. There, he shared an incredible opportunity.

Tired of the protests, publicity, and legal fees, the clinic owners were willing to sell. For $1.2 million, we could buy their two abortion businesses: the one in Germantown plus another in Prince George's County. The price also included the two-unit medical condo in which the Germantown clinic operated.

Tweet This: How we bought out LeRoy Carhart in #Maryland. @ChristyBrunke #prolife @40DaysForLife

A Christian businessman was willing to buy the buildings and make a generous donation. Could area churches, individuals, and organizations band together to raise the remaining $600,000?

"We believe our purchase of these two abortion clinics will save at least 1,000 babies a year," Pastor Baile said. "How much is a baby worth?"

Pastors presented the project to pro-life people in their congregation. Churches and organizations budgeted money toward the vision. Over the next three and a half months, people pledged $605,000.

Three and a half weeks later, the leaders had the money in hand.

To avoid liabilities, they opted for a Pay to Close contract instead of a traditional purchase. On August 30, Carhart committed the last of his abortions in Germantown and Prince George County.