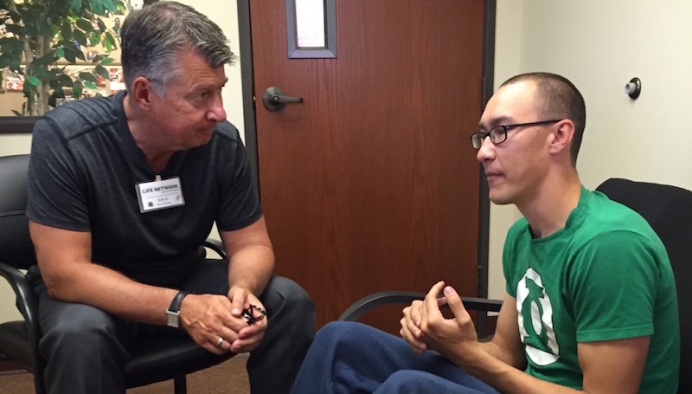 Beyond Mom and Baby: Life Network Reaching Out to Men

“What we’ve come to recognize is that some of our responsibility is teaching these guys what it looks like to be a man,” Rob Denler, Men’s Services Director at Life Network in Colorado Springs, said. “Many of our male clients don’t have an idea of what that is.”

While the women-led pregnancy help organization had provided outreach to men for several years, the program has grown exponentially since Denler came on board, starting in a part-time role four years ago.

Now a full-time leader at Life Network with a part-time staffer, Greg Asbee, under him, Denler has watched the culture of the organization’s services to men change dramatically over the past four years.

Developing a men’s ministry in a pregnancy help organization comes with its share of distinct obstacles, Denler said, pointing out that even the words used to describe the center itself can pose a challenge to reaching men.

“The biggest hurdle is that ‘it’s a woman’s place,’” Denler said. “It’s not been a place for guys, [and] there’s certain language that people are using that they’re not recognizing [excludes men].”

Instead of focusing on just mom and baby, Denler says, the shift should be to parenting.

“It’s a change in paradigm, really being from female-focused to family-focused,” Denler said, adding that a perspective shift needs to start with leadership. “There’s a perspective you have to break not only externally, but internally as well.”

Creating a program is like building a Field of Dreams, Denler said: If you build it, he will come.

“If you build that program—if you have guys here—fatherhood coaches and men to meet those young men as they come through the doors, I think that makes a big difference,” he said.

More than 100 men are served each month at the three Life Network campuses through the Fatherhood/Earn While You Learn program, as well as pregnancy testing and STI testing and treatment.

To meet the growing needs in the men’s ministry, Denler and his assistant have recruited men from the community to volunteer their time. The results are well worth the effort, said Denler, a former youth pastor. Those needs include a partner’s pregnancy, financial need, spiritual need, and simply “not knowing what it really means to be a man,” Denler said.

Tweet This: Starting a #fatherhood program: "If you build it, he will come."#prolife

The coaches in the fatherhood program play a pivotal role in welcoming new dads to fatherhood.

“We’re seeing some great transformations,” he said. “I’ve done so much ministry in the last four years that I never could have done in the church. People come in with such deeper needs. It’s really rewarding. We’re really intentional about relationships here in the fatherhood program.”

While reaching men with needed guidance and coaching is the stated intention and vision of Life Network’s program, Denler has been encouraged to see the program’s influence spread throughout the larger client base.

Often lacking positive male influences, many clients interacting with Denler, Asbee, or one of the volunteers are seeing a man treat women around him with respect for the first time.

“Oftentimes this is the first time that one of these girls has seen a Christian man or a model of a man as he should be,” Denler said. “It’s neat to see those girls get a glimpse of what a real man looks like. So many of the mothers want these young fathers to step up… when they do, the mothers love this.

“A lot of times the mothers are some of our biggest advocates for the fatherhood program because they get the results of it: they get fathers of the baby who are stepping up and getting it more. The whole family unit is impacted positively because of it.”

Tweet This: Fatherlessness in our society is killing us. #prolife #fatherhood #FathersDay2016

Fatherlessness makes a major impact on society. According to the National Fatherhood Initiative, 24 million American children, roughly 1 in 3, live in biological-father-absent homes, and children in father-absent homes are four times more likely to live in poverty. Fatherlessness is a key factor in youth crime and incarceration, drug abuse, sexual activity and teen pregnancy.

The role model/coaches fill that gap.

“The clients love talking to other guys. Most of these guys don’t have friends that are fathers—they don’t have anyone to talk to,” Denler said. “We truly become father figures to a lot of these guys. Those are rewarding moments.”

Two of the male services’ volunteers are in their 20s while the rest are 40-plus years of age. Building those relationships, the trust and the caring, is critical to the mentorship process.

“They don’t need another buddy to hang out with,” Denler said. “They need somebody to help mentor them or coach them on what it means to be a dad or a man.”