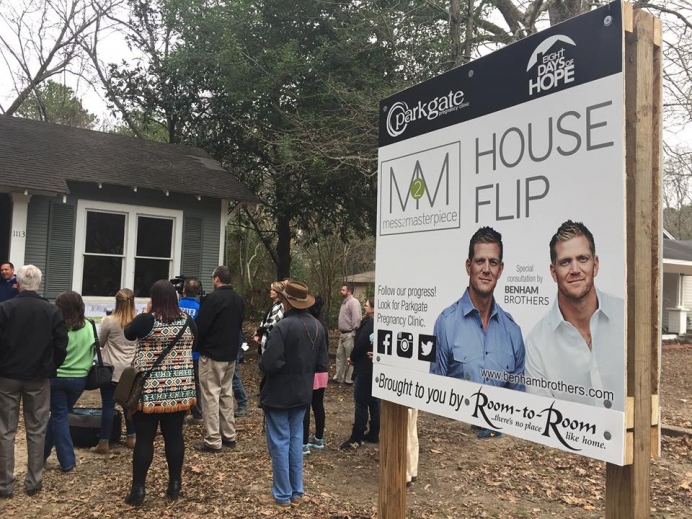 Of all the words that come to mind when people hear about pregnancy centers—good, bad, fair or unfair—one term that won’t make most Top-10 lists is “house flipping.”

That’s about to change in one neighborhood of Tupelo, Miss., where Parkgate Pregnancy Clinic bought a home with the intent to renovate and resell it this spring, using the proceeds to continue serving their community.

The clinic, which served 7,000 individuals throughout 2016, got the idea from the speakers at their upcoming banquet, David and Jason Benham, whose HGTV show, “Flip it Forward” was canceled in 2014 due to opposition to their outspoken Christian convictions.

Nearly 30 organizations—most of them based in Tupelo—are pitching in to make the project a reality, including Eight Days of Hope, a Christian volunteer mobilizing ministry that typically spearheads rebuilding efforts in areas hit by disasters.

Parkgate has named the fundraising project, “Mess to Masterpiece,” which is a phrase that took root for Parkgate during a client visit. A young woman had come in with her mother for a free ultrasound to confirm her unexpected pregnancy. After having seen her 12-week old baby, the mother told her pregnant daughter, “God is going to turn this mess into a masterpiece.”

When the pieces started to fall into place for the rebuilding project, fundraising director Jessica Roy and her team decided that statement captured a vision not just for the project, but for the pregnancy center’s outreach to clients in the community.

“We thought this might be a good opportunity to give back to the community and engage the community,” Roy said in a video promoting the project. “We bring new life here. It’s what we do every day in the clinic.”

With the Benham Brothers coming to town for the center’s banquet February 21, they’re also listed as special consultants for the Mess to Masterpiece.

Also lined up to speak at Heartbeat International’s 2017 Annual Conference in Chicago this April 19-21, the Benham Brothers gained national attention after a decade of running their Charlotte, N.C.-based real estate business focused on buying and reselling foreclosed houses.