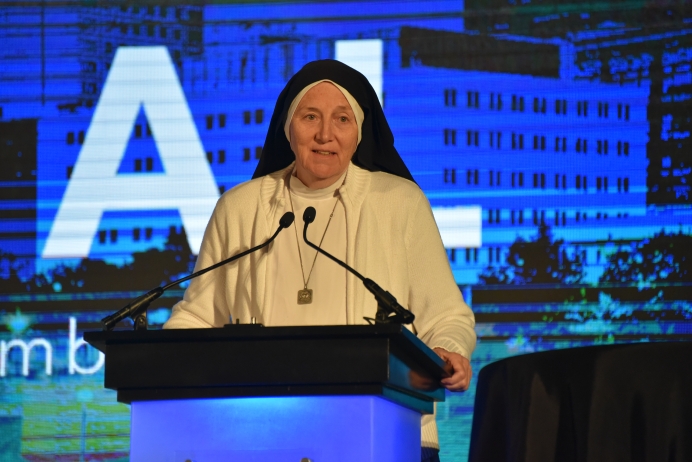 The religious sister who has captured the media spotlight over recent months for a straightforward and sage pro-life message told Heartbeat International’s Annual Pregnancy Help Conference that we must pray for those who are working to advance abortion.

Sister Deirdre Byrne addressed the Conference on its closing day, sharing that the battle for life is a spiritual one, and said that we must first be “battle ready” by being in a state of grace. She also said we must fight that battle with love.

Sister Dede remarked that she had prayed hard to the Lord about what message to bring to the hundreds gathered for the pregnancy help event.

“So, I was praying; what words does He want me to share with you all, and I think this is it,” she said, then quoting Ephesians 6:12:

“So, this battle we face is not a battle between Republicans and the Democrats, it’s not conservatives or liberals, or left versus right,” she said. “This is a battle between the devil, who is real, and Our Lord.”

Sister Deirdre Byrne, MD, “Sister Dede,” made headlines last August when addressing the Republican National Convention, she said she was not just pro-life, but pro-eternal life.

She is an active missionary sister, superior of her Washington, D.C. religious community, double board-certified in family medicine and general surgery, and a retired U.S Army colonel.

The Little Workers of the Sacred Hearts run a pro-bono physical therapy clinic and diabetic eye clinic, a retirement home for their elderly sisters and a music school for pre-school children.

Sister Dede is also a provider with the Abortion Pill Rescue® Network (APRN), who calls saving and defending life her “passion.”

Explaining how she came to speak for the RNC, the soft-spoke religious sister said she felt she was not doing enough to defend life, and had prayed to God:

The White House called shortly thereafter as part of the plan to have representation from all walks of life at the convention.

“I immediately asked, ‘Can I speak on life,’” said Sister Dede, who was told she could deliver the message that she wanted to.

While Sister Dede is passionate about life and willing to speak about its defense, she has not sought the spotlight, rather, she performs her various roles and takes the opportunity to speak when asked.

She had been invited to attend former President Donald Trump’s July 4, 2019, address, titled, the “Salute to America.”

In it Trump commended Sister Dede for her work in the military and medical fields:

“From our earliest days, Americans of faith have uplifted our nation. This evening we’re joined by Sister Deirdre Byrne. Sister Byrne is a retired Army surgeon who served for nearly 30 years. On September 11, 2001, the sister raced to Ground Zero, through smoke and debris, she administered first aid and comfort to all. Today Sister Byrne runs a medical clinic serving the poor in our nation’s capital. Sister, thank you for your lifetime of service. Thank you.”

“Life begins at the moment of conception”

Sister Dede doesn’t know how she came to be tapped for the event, she said, but it put her on the radar.

She shared with Heartbeat International’s Conference attendees what she told White House officials in the discussion about her RNC topic.

“I said, well you know, as a physician I’ve always wanted to help clear the confusion in this country, in the world, about when life begins,” she recalled, “so I would like to first of all say, in case you don’t know, life begins at the moment of conception.”

“That’s when a human soul begins,” said Sister Dede. “Our Lord has now created us in His image and likeness, and it’s beautiful, no matter what, that’s a beautiful thing.”

Sister Dede shared her life story with the Heartbeat audience.

She said that looking back, the Lord had given her little lights to show that He was with her on her journey.

While medevac’ing a critical patient on a three-day journey from Korea back to the United States earlier in her medical career, she believes the woman’s survival was aided through prayer and divine intercession.

In 1989 she would meet her high school hero in Mother Teresa of Calcutta while performing mission work in Calcutta, India. Mother Teresa has since been elevated to sainthood, so Sister Dede was moved to have met and worked with a future saint.

In the 1990s when she was chief surgical resident at Georgetown University, Washington D.C. Cardinal James Hickey, who she said was a “holy man,” had open heart surgery for which she assisted.

“So, I literally held his heart in my hand,” Sister Dede said.

Afterward she managed the cardinal’s post-operative care, and he would become her spiritual guide.

The following year when Mother Teresa came to Washington to receive the Congressional Medal of Honor, Sister Dede was asked to be her doctor for the five days that she was in Washington, accompanying the renowned nun and missionary 24/7.

“And so, in all of these things the Lord was saying, “Keep going, keep going, I’m with you always,” recounted Sister Dede.

“And I will say that the abortion pill reversal mission that I’ve been doing has been an incredible blessing as well,” she said, “another little light that shines.”

Her clinic’s success rate is approaching that of the protocol's overall rate and she is happy to have been able to help those women.

The greatest inhumanity is abortion

“But I think God was preparing with these lights for some of the darkness that might occur in my life,” said Sister Dede.

Between being a general surgeon and the many places where she has performed mission work, she has seen a lot.

Sister Dede detailed varied examples of terrible injuries and death she had encountered in war-torn and conflict-ridden areas and in the aftermath of natural disaster, places including Sudan, Haiti, Iraq, and Afghanistan.

“And it was horrible to see man’s inhumanity to man in these ways,” she remarked.

“So, this was a sign of what I saw of man’s inhumanity,” Sister Dede stated, “but the greatest, and to me the worst of all, is what’s going on in abortion clinics.”

Tweet This: "The greatest, and to me the worst (inhumanity) of all, is what’s going on in abortion clinics" - Sister Dede Byrne

“And it’s really bad because people don’t even think about it anymore, it’s become a natural thing,” she said.

We are in a battle, she told the audience, we need to know on what side we are going to be.

Sister Dede spoke of the “COVID cataracts” that we have had over the last year, a negative cloud effect of the pandemic fallout. During this time so many have been kept from religious services, at great price.

She explained that for Catholics during the lockdowns, they have not been able to participate in Mass and the sacraments – kept from receiving the things they need to stay strong.

Sister Dede spoke about the necessity of being in a state of grace with God to be prepared for battle, invoking Joan of Arc, the young woman considered a heroine of France for her role leading the French against the English in the Hundred Years War who was ultimately martyred. St. Joan is attributed with quotes that demonstrate courage in the face of battle and the importance of being in a state of grace.

Sister Dede also offered the analogy of being on an airplane and needing oxygen in an emergency.

“You have to have the oxygen and the strength to take care of the person next to you,” said Sister Dede.

“So as soldiers for Christ in this dark time, where every day things seem to be ramping up about things that are against the family and faith … We have to be prepared, battle ready,” she told the Conference crowd.

Tweet This: As soldiers for Christ in this dark time we have to be prepared, battle ready

We must fight with love

Sister Dede explained that in saying she is not just pro-life, but pro-eternal life, that this is not just about saving one’s own soul and the souls of loved ones, but also the souls of those who would oppose us.

She said that the change in power at the White House away from a pro-life administration has reminded us of where to place our faith and hope.

“We know that God is in charge and that He’s far greater than the devil,” Sister Dede said. “It is He that’s going to make things better And so we have to be just there, prayer warriors and be battle ready.”

Tweet This: We know that God is in charge and that He’s far greater than the devil - We have to be prayer warriors and be battle ready