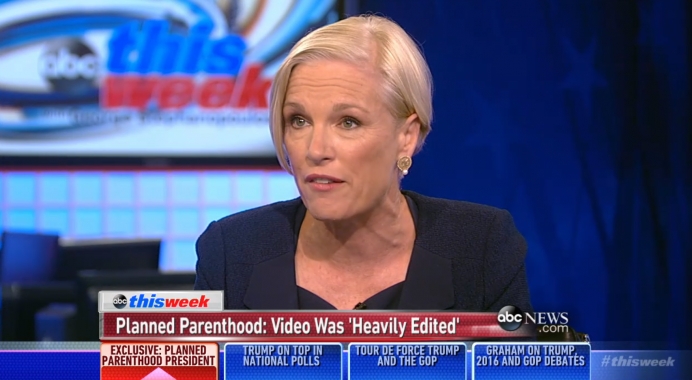 Once hailed as heroes by the public for their courageous, boundary-breaking work, it seems that undercover journalists have fallen out of style in recent days.

At least, that is, when an undercover journalist tampers with administration-protected, government-funded activity.

Of course, the government activity in this case is Planned Parenthood itself—on the take to the tune of $500 million per year in taxpayer dollars. And the undercover journalist in question (or should we say, in the crosshairs) is David Daleiden.

Daleiden and his Center for Medical Progress have now released four videos in an ongoing series, chronicling Planned Parenthood’s involvement in the trafficking of fetal body parts, harvested from babies who are being aborted—though as the fourth video indicates, some body parts are being harvested from already-born babies.

Since ducking for cover isn’t a viable option for the worldwide leader in abortion, Planned Parenthood CEO Cecile Richards and her PR spin team at SKDKnickerbocker devised a counter-attack.

While Planned Parenthood’s response to videos depicting its highest-ranking medical officials bartering for baby parts comes served with a side of  unconfirmed claims of a “hack” on its website, its main dish revolves around an attack on Daleiden’s undercover reporting, as well as a full-fledged character assassination of the man himself.

Tweet This: Is it @CtrMedProgress we should be questioning, or #PPact? #PPSellsBabyParts

The dirt on Daleiden includes “allegations” ranging from an attempt to discredit him based on his authorship of articles for “opposition outlet(s) The Weekly Standard and Human Life Review,” to the much more serious claim Richards herself made on an interview with ABC News.

Daleiden, Richards said, is, “part of the most militant wing of the anti-abortion movement that has been behind the bombing of clinics, the murder of doctors in their homes, and in their churches.”

Without as much as a shred of evidence to support her wild accusation—“slander” is the word that comes to mind here—Richards and her organization have repeatedly attempted to tear down Daleiden’s reputation and dismiss the videos as the “highly edited” act of a religious wingnut.

As a compliant public, we are to believe Richards' allegations—not only the flat-out lie that the uncut videos the Center for Medical Progress released were "highly edited," but Daleiden has some shadowy connection to the murderers who killed abortionists in 2009 and 1998, when he was 20 and 9, respectively.

Meanwhile, an injunction issued by the Los Angeles Superior Court has allowed StemExpress a reprieve until an Aug. 19 hearing to decide whether Center for Medical Progress can release more footage capturing conversations with three StemExpress officials.

(By way of reminder, StemExpress the company who has been paying Planned Parenthood affiliates retail prices for livers, stomachs, kidneys, hearts, and heads.)

In other words, the Center for Medical Progress has released about four hours—so far—of uncut video footage, capturing top medical executives from Planned Parenthood arranging for, haggling over, and actually harvesting body parts from aborted babies, and Planned Parenthood’s defense is essentially, “Where’d you get that?”

Planned Parenthood's strategy is to claim that the facts are irrelevant because the guy who filmed them is supposedly a shady character. Admittedly, it's a novel approach, but it's also one that won't work on anyone who's seen the videos. You can't unsee the unspeakable reality that is abortion.

Back to our original question: Whatever happened to lionizing undercover investigators?

Though the ethics of undercover reporting are a subject of constant debate, the Code of Ethics for the Society of Professional Journalists states, “Avoid undercover or other surreptitious methods of gathering information unless traditional, open methods will not yield information vital to the public.” (Emphasis added)

Clearly, in Daleiden’s case, a simple phone call or visit to the offices of, say, Deborah Nucatola, Mary Gatter or Savita Ginde, was unlikely to “yield information vital to the public.”

A quick search on Google for the words “undercover investigation” and “local news” return 26,100 results—in 0.34 seconds, mind you. Topping of the results is a story turned in by ABC 6 Action News in Philadelphia, “Undercover Investigation: Crossing Guard Caught Not Doing Her Job.”

Top results for the search list story after story, from all across the United States, of undercover investigations exposing wrongdoing by local governments, real estate moguls, and even local zookeepers.

The brave undercover investigators in the local newsroom always seem to be out there, fighting crime, confronting shady landlords and calling out carpet-bagging charlatans. The undercover reporting crew has become a regular part of many local newscasts, and we rarely think to question each journalist’s background.

And, believe it or not, the undercover journalists down at the local T.V. station aren’t the first, nor most notable, to engage in covert reporting.

The roots of American undercover investigation include Upton Sinclair, whose 1906 novel, The Jungle set the stage for sweeping change in the meat packing industry, and Elizabeth Cochrane (pen name Nellie Bly), who feigned insanity and was committed to a mental institution for 10 days in 1887, writing a two-part series that laid bare the inhuman conditions at a New York asylum.

Over the past century, undercover reporting has exposed institutional abuses in nursing homes and psychiatric wards, widespread racism, prostitution and human trafficking in numerous forms.

Tweet This: We love investigative journalism... until we ourselves are exposed. #PPSellsBabyParts #AnotherBoy

In fact, two separate “undercover reporters” on Big Abortion’s payroll have attempted, however unsuccessfully, to discredit pregnancy help organizations over the past year.

As it turns out, NARAL may want to learn from Daleiden and send in its next batch of “undercover investigators” in with some video or audio equipment (a smartphone would likely do), since she was unable to capture or record any evidence to support NARAL’s attack on pregnancy centers.

The lack of evidence hasn’t stopped lawmakers in California from relying on the mono-sourced NARAL report to push forward with legislation that would essentially force pro-life pregnancy help organizations to refer for abortions, however, which adds up in a state that is opening an investigation of Daleiden in the wake of the videos.

Meanwhile, an “undercover investigation” from Meaghan Winter—underwritten by the Ford Foundation and the McArthur Foundation—has yielded two articles in Cosmopolitan and one at Slate.com.

Again, working without the benefit of a tape recorder or hidden camera, the most damning pieces of information Winter was able to dig up revolved around her “finding” that pro-life pregnancy organizations are predominately led by Christian women.

In stark contrast to the baseless allegations drummed up against pregnancy help organizations, what Daleiden and the Center for Medical Progress has shown the public so far is undeniably clear, and to use the Society of Professional Journalist’s code, quite “vital”.

Four videos into this grisly series of revelations, let's ask one more question: On one hand, an industry built on the lie that a child is just a "blob of tissue" is caught red-handed, neck-deep in its own profit-motivated deception. On the other, grassroots organizations spearheaded by Christians are there to help women deal with the reality of an unexpected pregnancy.

Beyond the blame-shifting, the question is this: Who will end the culture war? Who will wave the white flag in surrender?

We pray to God it's the industry caught with blood on its hands.