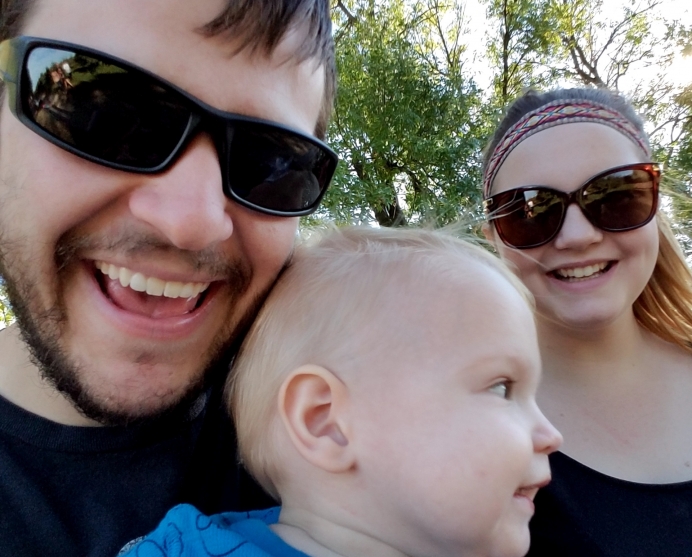 Baby Orion Was Unexpected, But He Changed His Parents' Life for the Better

Brittany Baker was shocked to find out she was pregnant in October 2015.

Though, unlike many women who go through an unexpected pregnancy, the father of Brittany’s child, Dan Gillard, embraced his new role as a father from the beginning, the couple knew they had an uphill climb ahead of them.

“I was pretty scared, pretty shocked,” Baker said. “I didn’t think I’d get pregnant at 22. I was worried about letting the family down or them being disappointed in us.”

At the time, Baker and Gillard were living in a one-bedroom apartment. Although Baker was under her mom’s insurance, she worried about expensive co-pays for prenatal care and classes.

Those factors were just a handful among many that made the couple want to wait until they had their feet under them to tell their parents the news.

Gillard had heard of Options for Women from a friend years prior, and they decided to visit. While Gillard was confident he wanted to choose life and keep the baby, Baker was still overwhelmed by her situation.

That visit to Options for Women went a long way toward putting her fears to rest.

“Right when I walked through the door, everyone was very comforting,” Baker said. “It was a very welcoming, warm environment. [The center] was very helpful in assuring Dan and I that they would be there for us in the decision-making process.”

Over the course of the next several months, Baker and Gillard did everything they could take full advantage of the resources the center had to offer.

“They wanted to learn because they did not have any support, they did not have anyone to hold their hand during the pregnancy,” Options for Women executive director Pat Burns said. “They probably attended more classes than 10 other clients put together. They were eager and they were ready to learn and it was just beautiful to watch them grow as people before the baby even arrived.”

“So many people hate the fact that no matter what clinic they go to, every time they come in, they see a different doctor and have to repeat their story over and over again,” Burns said. “We are family and [Dr. Druffner] cares about each and every woman and baby.”

On the day of delivery, Gillard received a phone call from Baker, which he ignored since he was walking in the door. As he came inside, Brittany was rushing around the apartment, trying to gather all their things and saying that her water broke.

When they got to the hospital, the mood changed.

The nurses told Baker and Gillard that their baby, Orion, was in distress, and Druffner ordered an emergency C-section. The umbilical cord was wrapped around Orion’s neck, and he wasn’t breathing on his own.

Over the next two days, as Orion was shuttled off to the neonatal intensive care unit at a nearby children’s hospital, Baker recovered in her hospital bed, struggling to sort out the traumatic experience she’d gone through—and coming to grips with the realization that she wasn’t out of the woods yet.

“I wasn’t even the first one to hold his hand or anything, which was very difficult for me,” Baker said.

Orion had to stay in the hospital for three weeks, and could not open his eyes for the first week. Gillard—and Baker, once she was released—stayed with Orion as long as they could, only leaving his side to eat.

Tweet This: One couple's journey to parenthood, and the role a #prolife center played.

During those three weeks in the hospital, Options for Life had not forgotten about the couple, checking in regularly and mobilizing their team and supporters to pray for them.

Today, Gillard works at a foundry in Minneapolis and Baker is a general manager at Domino’s Pizza. Orion turns two in June.

“Now that we’re doing better off on our own, we really want to support [Options for Women] any way that we can,” Baker said, “We try to support them by dropping off donations, though we could never repay them for all they have done for us."