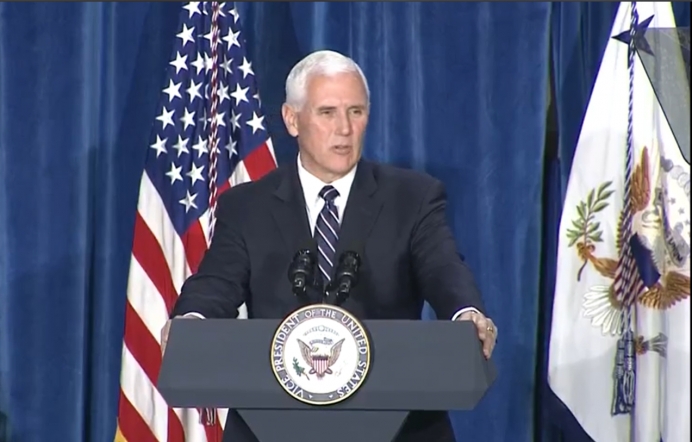 At White House adoption event, Pence pledges Trump Admin will "defend the sanctity of human life at every stage and in every circumstance”

"If you’re pro-life, you’re pro-adoption," Vice President Mike Pence said recently, saying as well that adoptive families are an inspiration for the country.

"Thank you for stepping up to serve those in need, through foster care, through adoption," Pence said. "What you do, you do for the most vulnerable among us. And you do for America."

"And during this National Adoption Month, know that your compassion and your love are changing lives and they’re changing this country," he continued. "And never doubt that the American people are with you, that they admire you."

Tweet This: Mike Pence: “I truly do believe that if you’re going to be pro-life, you need to be pro-adoption. And we are.”

President Ronald Reagan had proclaimed the first National Adoption Week in November 1984 to encourage and promote adoption of children on the national level, in particular, children with special needs. The week-long observance was expanded into a full month a few years later.

At this year's event Vice President Pence said in his remarks that the Trump Administration is committed to decreasing the number of children in foster care, and supporting families and parents that choose to adopt.

He promised on behalf of the Administration to promote and expand adoption, uphold freedom of religion for faith-based adoption agencies and defend the sanctity of human life.

"In his proclamation on this National Adoption Month, President Trump acknowledged, in his words, that, “Every child — born and unborn — is uniquely gifted by their Creator and endowed with both [the] potential and immeasurable value,” Pence said, "and that, in this month, we, as Americans “recognize the loving and devoted individuals who are part of God’s plan for every child by taking a role as a parent through adoption.”

The vice president shared that after five years of unexplained infertility, he and his wife Karen began the process to adopt a child, only to learn after those years of being unable to conceive a child that Karen was pregnant.

As the Pence's moved closer in the queue to adopt and had gotten the news that Karen was expecting, they learned that the family in line to adopt behind them could not have a child, and so they decided to step aside so the the other family could be blessed with a child.

Vice president Pence said that while they had not experienced the blessing of being an adoptive family, he understands the decision that is made in doing it.

"And I admire it deeply," he said, "as does every American."

Pence remarked further that the number of families that struggle with unexplained infertility in the U.S. is roughly equal to the number of abortions.

"And so, I truly do believe as we stand without apology for the sanctity of life, we must stand for and expand access to adoption in America," he stated. "That’s how we make progress, by putting families together."

Tweet This: VP Pence:“I truly do believe as we stand without apology for the sanctity of life, we must stand for & expand access to adoption in America”

Pence went on to cite the Administration's passage of the Family First Prevention Act, which matches federal funds with state programs to help parents get assistance to keep their children at home, to help protect them from substance abuse and with the challenges of mental illness.

"So, recommendations to foster care are declining, and those in foster care are being adopted at a record pace," said Pence. "That’s real success for strengthening families in America."

He recognized the adoptive families present as honorees, stating, "You all inspire us."

Pence stressed there was more work to do, and pledged continued collaboration in public and private partnerships to promote adoption across the country.

He then recognized Louisiana’s Department of Child and Family Services for its record-breaking adoption numbers, along with America’s Kids Belong, which matches older children and youth aging out of foster care with benefactors to help meet their basic needs.

The vice president offered a reminder of the Administration's reversal of the Obama-era rule that penalized faith-based providers for operating according their deeply held religious beliefs, praising the Department of Health and Human Services for its new rule, which respects freedom of religion for individuals and faith-based adoption agencies.

Four out of five families have indicated that faith and church support is a factor in successful fostering, he told those in attendance, and that countless families rely on their faith communities when adopting and welcoming children into their lives.

"We will stand for the freedom of religion and we will stand with faith-based organizations to support adoption," Pence said.

In wrapping up his remarks, he said, "Never doubt that this president and our entire administration stand with you to continue to expand and support adoption and lift it up as a means of expanding forever families across this country."

"And," Pence added, "I also believe that you should never doubt that He — who said, whatever you do for the least of these, you do for me — will bless every family that opens their home and their hearts to adoption."