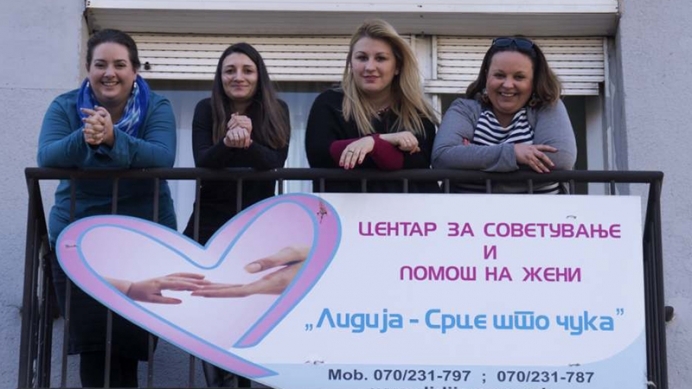 Last month, as the Macedonian Parliament prepared to strip the books of its last remaining abortion regulations, Svetlana Jovanova made a plea for the unborn, their mothers, and God.

Responding to a pro-abortion advocate who called God “the worst enemy of women” ahead of the vote, Jovanova assured the room, “I have God on my side and He doesn't hate women, He is not their enemy, He is their best friend.”

Jovanova, the executive director of Lydia - A Beating Heart—Macedonia’s lone pregnancy help center—was the only pro-life advocate whose voice was heard by parliament that day. When all was said and done, Parliament voted on March 14 to legalize abortion through all nine months of pregnancy.

Although she knew the new law was doomed to pass, Jovanova still believes it was important for her to be a voice of opposition.

“We just wanted to be heard, and we wanted people to know that Lydia is still here,” she told Pregnancy Help News. “Although the law is changing, we are not changing and we will continue to work as we were working before.”

Since its founding in 2012, Lydia has offered counseling, material aid, and education to parents who once believed they had no choice but abortion. For the first five years of its existence, Lydia was able to reach more women in hospitals and abortion clinics, thanks to a pro-life law which required counseling ahead of an abortion.

In 2017, that all came to an end when political pressure pushed Lydia out of the Clinical Hospital in Shtip. The new law sealed that fate by repealing the counseling requirement.

“So they recommend counseling in every other area of human life except when it comes to pregnancy,” said Jovanova. “I mean, not to say that women have to come to Lydia for counseling...they can go to any other psychologist....But still, they will have an option to think, to hear what their options are.”

Now, instead of the 100-150 women Lydia was counseling each year, the pregnancy center is helping about 50. Jovanova says that is still a good figure in a country where abortion remains a taboo. Yet she grieves for the women and babies who don’t know they have support.

During their time in the Shtip hospital, Jovanova says that of the hundreds of women they counseled, 10 percent ended up choosing life for their babies.

“Advocates (for the law) say they are considering ‘women’s will,’” said Jovanova. “But only the few women who are pushing the abortion agenda. What about the other thousands of women in Macedonia who do not know what to do? Who are facing an unplanned pregnancy and don’t have a support system? What about those women? What about their will? No one talks about those women. No one cares what they think or what they want to do. Not to say that they will choose life for their unborn, but still, they need to have the option. They need to have time to think.”

Jovanova says the sweeping changes, which took effect just three days after the March vote, are too much for her country.

“For a conservative society, this is way, way too much,” she said.

Until the new law, abortion had been legal in Macedonia until 10 weeks. The new law allows women to have an abortion for any reason through the first 12 weeks of pregnancy.

Jovanova couldn’t help but point out the unfair disparity the law creates.

Another grave concern of Jovanova’s is over the chemical abortion pill regimen, which was legalized as part of the new law. She explained that while the United States has been dealing with chemical abortions now for the last few decades—even developing an Abortion Pill Reversal protocol to help women undo their in-progress chemical abortions—Macedonian society is less familiar with its side effects and the traumatic experiences many women face.

“It will be devastating if they have to face all of that at home all alone,” she said. “There’s so many things that they didn’t even think through and they just made them legal...available….they don’t even think about consequences...what those women will suffer.”

Tweet This: “There’s so many things that they didn’t even think through...they don’t even think about consequences...what those women will suffer.”

To speak out on behalf of these women, Jovanova had to work her connections within parliament to even receive an invitation to the public debate last month. For six months, she was repeatedly stonewalled.

Even when Lydia and approximately 30 other NGOs formed an association to support family values—a significant feat in a time of rapid political change—their new group faced a complete blackout from the media.

In spite of the many forces that have played against her, Jovanova says her center hopes to grow its services to reach more women in the coming months.

“Now, we are going to have even more work than before because we are starting support groups for women who have had an abortion and miscarriage,” she said. “And we’re hoping that maybe women will call and, finally, they will face the challenges they had after an abortion and they recognize the symptoms and that they need help. But we will see how it will go.”

“We cannot change the law, unfortunately,” she said. “We’ll continue to be vocal for the issue. We know that there will be women who will kind of be forced to have an abortion, and it will be hard for them to face the consequences after that because they don’t know what kind of emotional challenges, emotional battles they will experience after that, so we want to be here for them.”