For some time now, pro-abortion organizations have been falsely stating that abortion pill reversal is "junk science." The Washington Post joined the American Medical Association (AMA) in amplifying this claim just last week with a headline reading "Medication abortions can’t be ‘reversed.’"

Sorry, guys, you are wrong.

It is unfortunate that the AMA would recommend that doctors deny information and care to women who may regret taking the abortion pill. With chemical abortions accounting for as many as 40 percent of abortions throughout the U.S., the need for information is great and publishing misleading headlines because you don't agree is unethical.

Tweet This: Every woman should know about abortion pill reversal so she can have hope if she changes her mind.

Otherwise known as the “abortion pill,” RU-486 or chemical abortions involve a two-drug regimen: mifepristone and misoprostol. Mifepristone, the first pill, destabilizes a pregnancy by blocking progesterone, the natural hormone needed to sustain a healthy pregnancy. To finish the abortion, misoprostol induces labor, forcing a woman’s body to deliver the baby.

The reversal treatment works by giving a woman extra progesterone up to 72 hours after she takes the first chemical abortion pill, and continuing through the first trimester of her pregnancy.

A peer-reviewed study showed that two out of three women who changed their mind about an abortion and started the abortion pill reversal treatment were able to save their pregnancies and give birth to a perfectly healthy baby. The study also showed a lower preterm delivery rate than the general population in addition to no increase in birth defects.

Managed by Heartbeat International, the abortion pill reversal protocol is backed by a 24/7 helpline (877-558-0333) and a robust provider network of more than 800 clinicians, known collectively as the Abortion Pill Rescue Network (APRN). The network connects women seeking reversal to her local APR provider to begin the protocol and attempt to rescue her baby.

Progesterone is nothing new

The protocol used in the reversal process is nothing new; in fact, progesterone has been used routinely and safely with pregnancy since the 1950s.

Progesterone is a natural hormone in a woman’s body that is necessary to nurture and sustain a pregnancy. It is commonly used to help prevent miscarriage and in this case, to help a woman save her baby.

Any claim that abortion pill reversal is "experimental" is pure hyperbole.

Women Deserve to Know about APR

Various states have passed laws requiring that women seeking the abortion pill will receive information about the reversal process to have in hand if they regret taking that first pill.

North Dakota, Idaho, Utah, South Dakota, Kentucky, Nebraska, Oklahoma, and Arkansas have all passed similar measures. Arizona attempted to enact such a law in 2015, but legislators repealed it after a court challenge. Other states like Ohio have announced similar bills and are awaiting introduction.

“I think there’s one thing we can all agree on, and that is no woman should be forced to have an abortion which she doesn’t want,” said Sen. Peggy Lehner, one of the sponsors of the proposed Ohio bill.

The Proof is in the Pictures

To date, more than 750 women have saved their pregnancies through Abortion Pill Rescue. Women like Marie, April, Sarah, Alexis, Hannah, Misdy, Emily, Katrina, Rebekah, and the list goes on...

These are real women who immediately regretted taking the first part of the abortion pill regimen and were determined to find a way to rescue their babies' lives. They went to numerous check-ups, kept up on their medication, and in some cases, sacrificed relationships with the father of the baby to save their baby. That is true love.

These faces exist because their mothers believed in abortion pill reversal. 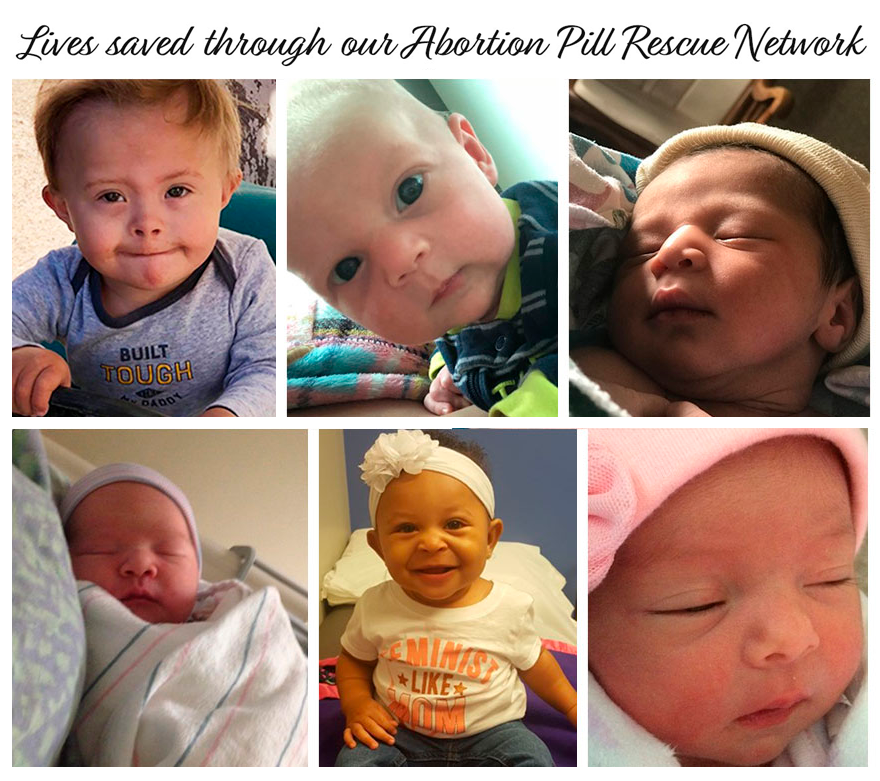 Tweet This: These faces exist because their mothers believed in abortion pill reversal.

So, a reminder to Washington Post and the AMA, just because you don’t want to believe that something exists, doesn’t make it fake. It makes it a miracle!