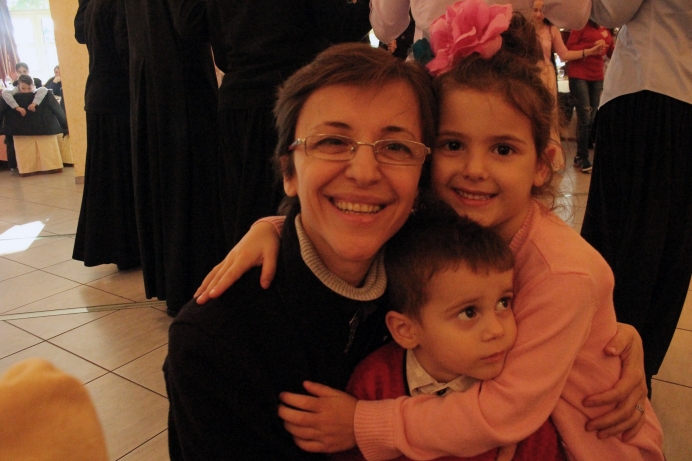 There is no inviting sign outside the pregnancy help center in Lezhë, Albania. The center has no official name, no building of its own. Yet babies are being saved from death there, and their mothers are finding needed support in their pregnancies. And it all began with one woman praying silently, alone.

Maria Katerina knew God had called her to defend the unborn. She also knew that innocent babies were losing their lives to abortion at the maternity hospital in Lezhë. So she started there. Five days a week, Katerina visited the hospital and simply prayed.

“It did not pass unnoticed by the doctors,” Katerina said. “The prayer started to give its first fruits. The doctors started to refer to me only those women who could not afford to pay for the abortion. Thanks be to God that these women were poor, as now they enjoy their children and are very happy mothers.”

Nine months later, on December 14, 2012, the doctors provided Katerina a room within the hospital to use as a Counseling Room for Life.

“It is a pure miracle from God, as it is [usually] unlawful in Albania, and no other maternity hospital in the country has it,” Katerina said. “Just recently, we have been allowed to have weekly adoration of the Blessed Sacrament inside our room, and we hope that the presence of Jesus in this modern-day ‘Golgotha’ will convert the hearts of the abortionists.”

Maria Katerina’s calling began with a whisper. Like over half the population of Albania, she was raised in a Muslim family. She knew nothing about Christianity. However, as her family did not practice their religion, she had no education in Islam, either.

“In 1994, I entered a Catholic Church in Tirana [the Albanian capital] for the first time ever with a friend of a cousin of mine, who was attending the Sunday Mass,” Katerina said. “I did not understand anything at all. But, when I stared at the cross above the altar, I heard twice a voice within me saying, ‘Go and follow me into your hometown.’”

When she returned home to Elbasan, unsure of what the whisper in her heart meant, she searched for another Catholic church. “To my big surprise the church was only 5 minutes walking from my home!” Katerina said.

After two years of initiation classes, she was eventually baptized at the age of 19.

“It had to be a private baptism, with only a very few close friends, as I had to hide it from my father, whose family is more observant in keeping Muslim faith and traditions,” Katerina said. “I just didn’t want to hurt him. After some time, he accepted the baptism and was acting in favor of Christian traditions.”

While seeking direction in her vocation to consecrated life, she was asked to translate at an upcoming pro-life conference to be held in Tirana in May 2011. The speaker was Msgr. Philip Reilly, the founder of Helpers of God’s Precious Infants, a street pro-life counseling apostolate in the Catholic Church.

“God opened my eyes in this wide field of pregnancy crisis, where the harvest is great but the laborers are few,” Katerina said. In September of that year, she moved north to Lezhë, a town of over 65,000 people along the Adriatic coast. In March of 2012, after acceptance of her apostolate by the bishop there, she began her vigils within the walls of the maternity hospital.

The Real Heroines of Albania

From the days of silent praying and waiting, Katerina has seen the ministry grow to serve as many as 30 to 50 women a month. In September 2014, three more women from her Catholic lay community, Bashkësia 'Tempulli i Zotit' (Community 'Temple of God'), began serving alongside her during the five days a week the center operates.

So far, although she does not like to count them, Katerina knows of at least 25 children who live today because of their work within the very walls of the building where abortions are performed.

Together, Katerina and her team help their clients think through issues such as contraception, abortion, adoption, in-vitro fertilization and natural family planning. In addition to counseling and emotional support, they provide the women with material assistance to help them carry and raise their babies, and with full information on adoption when the mother cannot raise her child.

Of the women whom she convinced to carry their babies, four have chosen to make adoption plans. The couple who adopted the first of the four children has become such an enthusiastic promoter of adoption that many other couples have set out to adopt children from orphanages.

“Albanians normally are a pro-family people.” Katerina said. “We have the youngest population in Europe. Nevertheless, the abortion law, approved in 1995, has misled the younger generations by choosing abortion as a solution to their pregnancy crisis.

“The main causes of abortion are economic situation and unplanned pregnancy. But even when a pregnancy is planned or desired, there are chances for a child to be aborted due to sex selection (when it happens to be the third or fourth female in row) or due to grave health issues of the child, and sometimes even of the mother.

“There is a mentality among doctors that the mother comes always first. But I have come to know women that have chosen the lives of their children when they were risking their own, even when the child could not survive. These are the real heroines of Albania.”