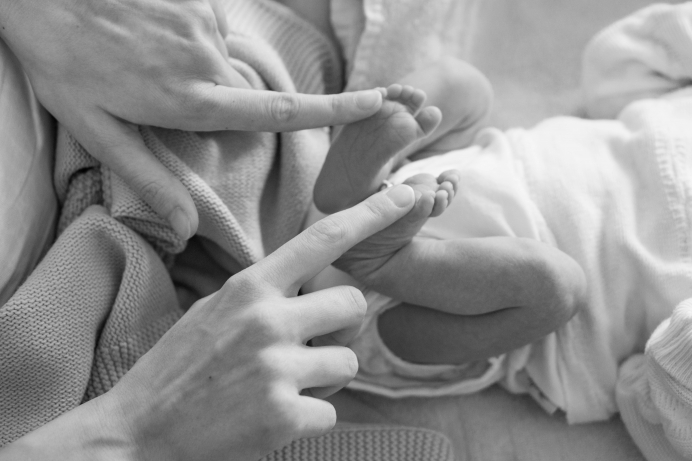 Shortly after “Marissa” learned she was pregnant, she made an appointment for the very thing she would come to regret: a chemical abortion.

Before doing so, she had visited Elizabeth’s New Life Center, a network of pro-life pregnancy centers in southwest Ohio.

There, she received a pregnancy test, an obstetrical ultrasound scan and a pregnancy options consultation, all free of charge. The center had done everything they could to educate and support Marissa in her pregnancy. Ultimately, they hoped she’d choose life for her unborn baby.

Despite the center’s best efforts, Marissa soon found herself at the Women’s Med Center of Dayton, a local abortion facility, where she obtained the drugs to have the chemical abortion.

After beginning the abortion, Marissa endured an intense period of heavy bleeding, clotting, and cramping, side effects that are typical of a chemical abortion. Marissa returned to Women’s Med Center for a follow-up appointment—only to discover that she was still pregnant.

“It didn’t work,” the staff told her.

“I don’t know what that means—what do you mean, ‘It didn’t work?’” she asked.

The staff told her that the abortion had failed and she would have to have a surgical abortion to complete it.

But Marissa didn’t want a surgical abortion. Unable to offer her any other assistance, the abortion facility sent her on her way.

That’s when Marissa called Elizabeth’s New Life Center, the same pro-life clinic she had visited just before her abortion.

“When she called us, she asked, ‘I don’t know, is my baby dead? Is my baby still alive?’” said Meg Carnahan, director of Elizabeth’s New Life’s six Women’s Centers.

Tweet This: “When she called us, she asked, ‘I don’t know, is my baby dead? Is my baby still alive?’”

Marissa’s call came to the center at an opportune time. Unbeknownst to her or anyone beyond the center’s walls, Elizabeth’s New Life had been working on plans to implement a life-saving new service in their centers known as Abortion Pill Reversal.

The protocol, which has saved more than 900 babies since it was first used in 2007, floods a woman’s body with progesterone, the natural hormone needed to sustain a healthy pregnancy.

Since the 1950s, progesterone has been used with FDA approval to prevent miscarriages. When used in the Abortion Pill Reversal protocol, progesterone has a 68 percent success rate if administered within 72 hours of taking the first of the two chemical abortion drugs.

Knowing the importance of that timeframe, Elizabeth’s New Life encouraged Marissa to come in as quickly as possible for an appointment. Based on Marissa’s heavy bleeding, Carnahan’s team wasn’t hopeful.

Marissa came into the center where the staff administered a pregnancy test and ultrasound. The test read positive, but the team still needed to detect a heartbeat via ultrasound.

“The room was very tense, just expecting to see the worst,” said Carnahan. “When the (sonographer) put the probe down, the baby was moving and waving and kicking. It was amazing! The baby had grown exactly the way it was supposed to.”

The atmosphere in the room changed immediately.

“It was just—it was amazing and you could hear them celebrating from inside the ultrasound room,” said Carnahan.

With that, the center’s medical director prescribed a high dosage of progesterone for Marissa, initiating the Abortion Pill Reversal treatment.

Marissa was able to obtain prenatal care for the duration of her pregnancy, and later this past fall, she called the center with some exciting news: She had given birth to a perfectly healthy baby boy.

Marissa is one of four women whom Elizabeth’s New Life has assisted with Abortion Pill Reversal. Her story is the one that prompted the organization to finalize the implementation of the protocol into its services and formally register with the Abortion Pill Rescue Network, a group of more than 800 providers that is spearheaded by Heartbeat International.

“At that time, we weren’t registered, it was just that, (Marissa) was a woman in need and didn’t know where to turn,” Carnahan said. “I think it speaks volumes of our employees in our Women’s Centers that she felt comfortable to call—even though she knew that we did not promote abortion or anything like that. She still felt safe to call us when she didn’t know what else to do.”

Marissa’s experience pushed the center to ensure that other women in need would have the same option she did.

“It absolutely solidified for us that this is something that we have to do and we have to be registered to be able to provide this service,” Carnahan said. “We now had a sense of urgency in becoming providers.”

In putting the practice into place, Carnahan wanted to ensure that all six locations would be able to provide the life-saving protocol. That meant having a physician who would be able to prescribe the progesterone at each location.

“The registration process is simple,” Carnahan said. “But we wanted to make sure that we had everything in order so that once we were registered, we truly could provide the best possible service.”

Finally, three days after registering as a provider with the network and training the staff, Elizabeth’s New Life got its first call from the Abortion Pil Reversal Network’s 24/7 helpline (877-558-0333). The center was able to start the woman on the treatment immediately.

“It’s crazy how God works,” Carnahan said. “God’s timing is awesome, when I can be patient and listen.”

Now, Elizabeth’s New Life is working to get the word out about Abortion Pill Reversal by including a small flyer in the packet of each client who receives a positive pregnancy test. Carnahan says that while a woman might not be abortion-minded in her initial consultation with the clinic, that can quickly change based on various life circumstances.

“They’re vulnerable to abortion and we know that because they’re not in stable homes; they don’t have stable jobs or stable relationships, so they’re vulnerable to those things,” she said. “They can be in your office and they can be excited about the pregnancy and talk about their plans...but we also know that five minutes after they leave our center, their entire life can be flipped upside down and different. And that woman who you thought stepped out of your center not even thinking about abortion is now contemplating it and taking the steps do it.”

Carnahan says that women like Marissa come back to her centers frequently, even after having an abortion and getting pregnant again.

“I say that’s success on our part because we showed them that we love them…” she said. “You know, there is no way that I think a woman can leave one of our centers and not know that we do really, truly feel like the best thing she could do is choose life for her baby. But never to the point of damning her or condemning her or really even judging her in any way shape or form. Because if we we’re doing that, women wouldn’t come back.”

Now, in moving forward with the Abortion Pill Rescue Network, Carnahan hopes that women will continue returning to her centers, especially if they change their mind about a chemical abortion.

“It’s just making sure that we’re giving that information to as many people as possible so that they know all the options that are out there,” she said. “If they ever make the decision to take the abortion pill, we want them to know that there is still hope and help available.”

Tweet This: “If they ever make the decision to take the abortion pill, we want them to know that there is still hope and help available”