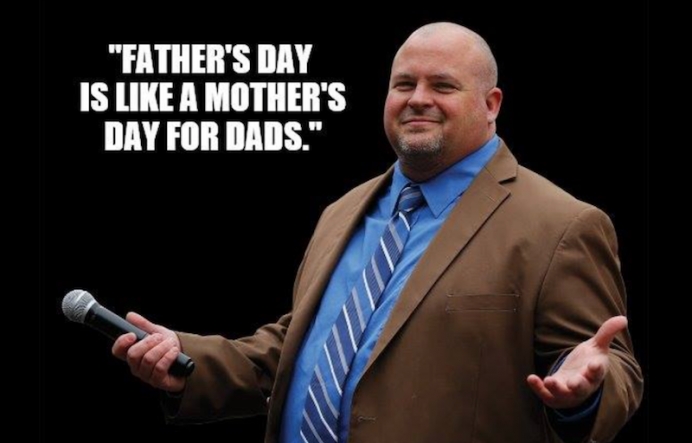 A Time for Dads. Really.

Friend and comedian Dan Kulp posted a “self meme” (is that a thing?) on Facebook the other day and as usual, had me laughing. But, it also got me thinking.

The quote? “Father’s Day is like a Mother’s Day for dads.”

Even today, Mother’s Day is a “bigger” holiday than Father’s Day. There are more cards, more flowers (not that we guys want them, anyway) and more families going out to eat. From a Father’s perspective, I deem this all as to be not just “acceptable,” but as it should be.

My family knows the one gift I want every Father’s Day. I don’t want candy, flowers, or even a fancy present. All I want is to enjoy watching the final round of the U.S. Open golf tournament with my sweet tea and lemonade in one hand and the remote control in the other. I tried to qualify for the Open several times as a much younger guy (no, I never made it—but I tried), and still enjoy watching the best in the world fight their way through the toughest venues in the game.

So I hold no grudge against the fact that mothers have a “bigger” day.

But, in the pregnancy help community we need to pay the guys much more attention.

I get the marketing idea that tells us we must be “pro woman” and take that mantle away from the Planned Parenthoods of this world. Believe me, I understand. But may I pose a question?

What about fathers? We know that perhaps the most influential person in a woman’s pregnancy decision is the father. We can show a woman her child on ultrasound, and this makes a major difference. We can meet her physical needs in a variety of ways. This too, is important.

We can assist her and mentor her with parenting initiatives. No doubt, this is vital.

But doesn’t it make a lot of sense to also engage the father, who can be not only a support, but a co-champion for their child; and a provider and leader for the family?

This is not to say that every pregnancy should result in marriage. But isn’t one of our roles to help a woman identify all of her options and provide every opportunity for her to make a wise decision? If so, we must bring the father into the equation—and this involves more than just asking her a few questions about him. It means finding a way to connect with him.

I know many of the reasons why we supposedly “can’t” engage dads.

“We don’t have the money for a fatherhood outreach,” we’re told. Again, understood. But we can raise money for ultrasound machines, mobile units, medical training, new facilities and so much more. If we decided building two-parent families is a top priority for creating a culture of life in this generation and the next, we can believe there is support for this endeavor.

“We just can’t get dads to come in the door” is another common theme. Really? So we’re just going to quit on the idea?

As a community, we are obtaining tremendous marketing research on how to reach the abortion-vulnerable woman and meet her where she is, so we can reach out to her in love. But fathers are somehow unreachable?

Nobody said this would be easy. All of what we do is difficult. We are endlessly attacked by the multi- billion-dollar abortion industry, by the media and by politicians bought and paid for by abortion providers fearful of losing their cash flow. Yet we are still here—stronger than ever.

We can do all of this, yet we are going to decide that while there is a group of potential world-changers out there who need us, we cannot reach them?

Friends, as Father’s Day approaches we have a choice to make. We are either going to move toward making dads a priority or we are not. This doesn’t mean a multi-million-dollar investment or changing everything in our organizations overnight.

But this does mean we all must think seriously about fathers. Many of our organizations are already building strong fatherhood outreach initiatives. Let’s all follow their lead.

We must discuss dads in our staff and board meetings and begin making decisions, with a firm belief that dads matter not only today, but can change the next generation as well.

Reaching fathers starts with us. If we have enough “want to,” with God’s help we can make it happen.