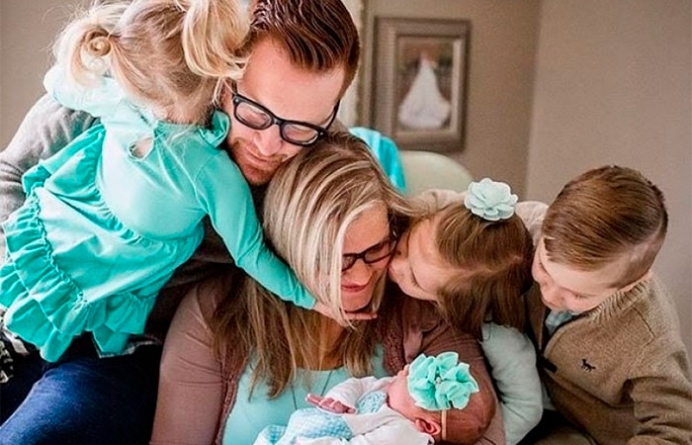 Andrew Wood, his wife, and four of their five children

"A mess on a napkin"

Recently, a Pennsylvania Lawmaker, while discussing a bill designed to protect the bodies of babies after an abortion is performed, described a miscarriage as a, and I quote, “mess on a napkin.” Democratic Representative Wendy Ullman made this crass comment in the month of October, which is traditionally known as Pregnancy & Infant Loss Awareness Month.

These comments are reprehensible and should be called out as such. The lack of empathy from an elected official to her constituency is maddening. This isn’t a debate on pro-life and pro-choice. Instead, this is simply dealing with common decency. Regardless of where one falls on the issue of abortion I think we all should be able to manage a thread of remorse for those facing a miscarriage.

Hearing these statements took me back to January of 2012. My wife and I had recently found out that we were expecting our second child. We were so excited to know that our family would be adding a new member. That January I was sitting at my desk when I received a call from my wife. She had gone in for some cramping and was alerted by our doctor that she was having a miscarriage.

I won’t go into details, but I will say that our mourning, our tears, and our heartache wasn’t over a “mess on a napkin.” We cried for our child as we wept with family and friends. To label our despair as a “mess on a napkin” is so wrongheaded and offensive that I struggle to even find the words to illustrate my disdain.

I am a firm believer of the first amendment and part of me is glad that this representative gave her honest opinion, because I believe that she isn’t alone in this thought. This crass and wrongheaded comment sums up the anti-life movement in a perfect way. They do not see life as a gift to be cherished or even mourned. They see life as a dispensable blob that if ended in the womb can be tossed away as a mere “mess on a napkin.”

My life was changed forever in January of 2012. I didn’t lose a blob of tissue that day. No, we lost a child. A child that was never created before and will never be created again. Our third, fourth, and fifth pregnancy didn’t replace our second. Sure, our family is made up of four amazing children today, but we were blessed with five children. We just didn’t get to hold one of them in our arms.

Tweet This: ”Our third, fourth, and fifth pregnancy didn’t replace our second”

I had a lot of anger toward Representative Ullman when I first saw her comments. That anger today has turned to sadness. Sadness for the thousands of parents out there today that will read her comments and immediately think back to the loss of their child. A child, mind you, that was uniquely and wonderfully made for their family.

I will not allow this elected official to tarnish the memory of my child and the thousands of children that saw their life end in the womb. Reducing humanity, my child, down to a “mess on a napkin” is shockingly ignorant, but ever so revealing as we continue to see the veil pulled away on the ultimate anti-life agenda. An agenda, mind you, that is losing ground in every single category.

Think about that person today that has been affected by miscarriage. Give them a call, send them a note, or say a prayer for them. Many of us don’t open up about our loss for one reason or another, but please know that the loss never goes away. That loss is always  here and stories like today will only bring it back to the front of our mind. Your prayers, calls, and notes will be appreciated as we seek a day where humanity is given the dignity it deserves.