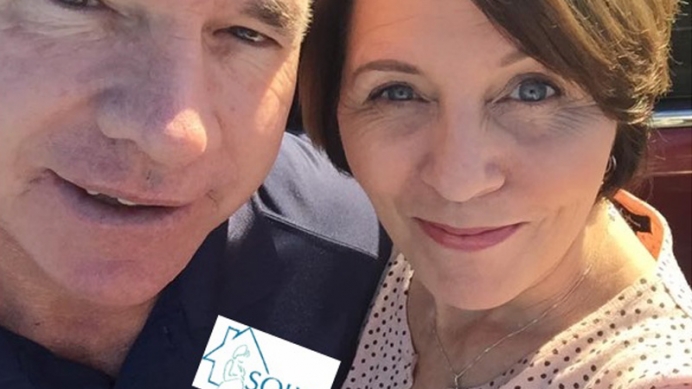 SOLVE Maternity Homes in Florida helps women who experience unplanned pregnancies change their lives. Last year, a major transformation took place for an unprecedented number of SOLVE’s clients: By year’s end, five of them were married, a feat that brought great joy to the organization’s director and her husband.

Kerwin and her husband, Brian, who serves as SOLVE’s development director, witnessed the women’s transformation, and attended four of the five weddings last year.

For more than 40 years, the non-profit has provided a place of safety and empowerment for mothers-to-be, free of charge. Open 24/7, 365 days a week, SOLVE recently expanded. With two homes in Bradenton, the organization opened another home in Englewood about 40 miles away, and a fourth one in Sarasota. SOLVE provides housing for more than 20 moms-to-be at one time, and last year assisted 56 such women.

“There are not a lot of maternity homes in Florida. We help these precious women who are broken and hurt, connecting them with the community,” Kerwin said. “Ninety percent come from lifelong trauma. Our job is not to fix them–our job is to love them where they’re at, to build-up their self-worth and show them who they are to their Creator, putting them on a pathway to make right choices.”

In addition to providing housing, SOLVE staff design specific programs to meet the needs of the women they serve, which includes finishing education, career training, job hunting, and transitional living programs for the women and their children after birth.

“Everyone’s plan looks different,” Kerwin said. “By the time she’s out of the hospital, she’s worked out her case plan to exit SOLVE.”

“Brenda,” one of the 2017 brides, was a client who benefited from a housing program after the birth of her child. Prior to coming to SOLVE at age 25, she had been severely beaten by the father of her child. Although Brenda and her unborn baby survived, Kerwin says, “she was broken physically, mentally, and spiritually.

“She finished components of her education, received personal care to heal her heart, mind, and spirit, and was connected to a housing program after she left us. She worked and saved money, and she met her now-husband at church. They are an impressive young couple.”

Twenty-year-old “Andrea” became pregnant while in college. Her parents had divorced and remarried. The young woman had a faith background and came to SOLVE for housing and a place to reconnect with God.

“She needed a place where she could hear God speak to her,” Kerwin said. “At first, she considered making an adoption plan. We educate the women who spend time with us on all their pregnancy options. Those who adopt live with those who parent.”

The father of her child remained supportive when Andrea decided to parent. After the young woman moved from SOLVE, he and Andrea began dating again; they married last November.

“Judy” originally started as a client at the Englewood location. A local pro-life center had confirmed her pregnancy. She needed a place to live due to her mother’s unhealthy lifestyle.

“Our client was more of the adult in the relationship. She knew she needed to get of the situation but didn’t know how to,” Kerwin said. “The Englewood home didn’t work out for her, so we moved her to one of Bradenton houses. She thrived. She got a job, some counseling, and married a solid young man. They attend church together.

“Everybody’s story is different, but we want them and the men in their lives to see their value. Poor self-worth can cross the socio-economic lines."

Tweet This: 5 weddings in one year, these maternity homes are transforming lives. #prolife

Consider “Susan.” The 17-year-old came from a wealthy family and lived a life of privilege. After the birth of her baby, she moved from a SOLVE home to another part of the country and attended college, where she met, and last year married, “a solid man,” according to Kerwin.

“Christine” came from a military family. Her plan was to follow her mom into the service, but health issues caused the young woman to be rejected.

“She had a strong plan for her life, and when that dream didn’t happen, she took a turn and got on the wrong path, and she became pregnant,” Kerwin said.

After making an adoption plan and giving birth, Christine returned to her lifestyle and once again became pregnant

“Her family didn’t support her this time, so she came to us," said Kerwin. "She became an adult – she relearned her value."

Poor self-worth, depression, broken homes, drug issues, human trafficking – these are some of the traumas Kerwin, her husband and staff encounter as they work with women who come to the maternity homes.

“SOLVE becomes a triage center,” Brian Kerwin said. “There’s a lot of turmoil (but) the transformation is permanent. We’re impacting families and communities.”

“Last year was a special year for us – these women waited for God’s best and married solid, upstanding Christian men,” Peggy said.

Editor's Note: Names have been changed to protect the identities of clients.