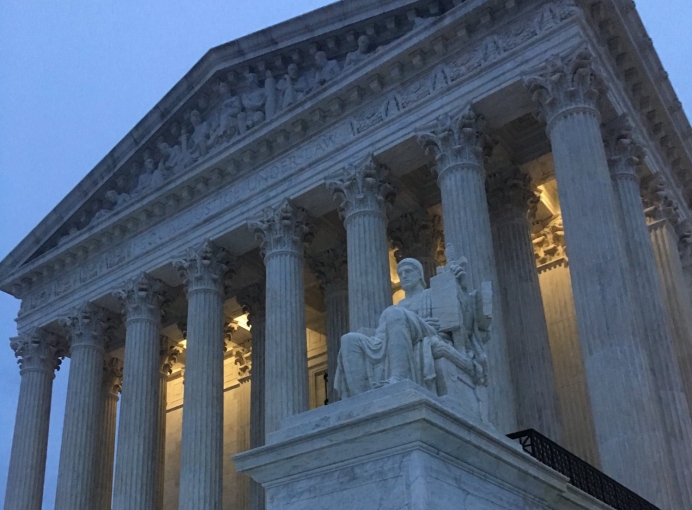 Since Mauck & Baker had filed an amicus brief in the case on behalf of twenty-three Illinois centers, I made sure to get a front row seat for the argument and it didn’t disappoint. As a witness to the arguments that were being made both in and outside the court room on Tuesday, here are three observations and two predictions.

Observation 1: California could not point to any actual evidence that pro-life pregnancy care centers have engaged in the type of misleading and fraudulent behavior of which they are accused. Accusations that these centers “pose as abortion clinics” or are “fake clinics” are being made daily by pro-abortion interest groups and politicians under the new hashtag #EndTheLies.

While Planned Parenthood supporters may believe such accusations without any actual evidence, the Supreme Court demands more. In an ominous sign for California’s case, it was Justice Ruth Bader Ginsburg, the most outspoken supporter of abortion rights on the court, who asked the state if it had any evidence for this claim. It did not.

Observation 2:  As Justice Gorsuch put it, this court “jealously” protects the freedom of speech. Not a single justice gave any indication that they were interested in weakening the freedom of speech by recognizing a “professional speech” exception to the First Amendment, and most of them seemed troubled by what Justice Kagan referred to as the “serious issue” as to whether the “statute has been gerrymandered” to target only pro-life centers.

Observation 3: Justice Kennedy’s billboard hypothetical put the nail in California’s coffin. Justice Kennedy asked both attorneys a simple question, “What would happen if an unlicensed entity, unlicensed center, just had a billboard that said ‘Choose Life’? Would they have to make the disclosure?” The disclosure to which he was alluding is a 29 word statement that must be in the same size font as the main message and must inform the public that the center is not licensed as a medical facility by the state.

While California’s attorney would not concede the absurdity and burden of such a disclosure requirement, Justice Sotomayor, who kept returning to this question, said the requirement seemed “burdensome and wrong.”

Tweet This: @NoelWSterett on #SCOTUS #prolife free speech case: #NIFLA is going to win this, and it won't be close. #LetFreeSpeechLive

Prediction 2: Pro-abortion interest groups and politicians will increase their efforts to go after pregnancy help centers, even though they have clearly chosen the wrong ground upon which to fight. By ground, I mean both the ground of truth—which is on the side of the pro-life community—and the United States of America—wherein our freedom to proclaim the truth is still “jealously” protected by the Supreme Court.

Noel Sterett is an Alliance Defending Freedom allied attorney and a partner at Mauck & Baker. Noel’s practice is split between litigation and transactional work on behalf of churches and small businesses. He has litigated at both the trial and appellate levels in courts across the country from Idaho to New Jersey, advocating for the civil liberties of churches and ministries in the land use context. He has represented pro-life medical professionals and pregnancy centers. Noel resides in Elmhurst, Illinois with his wife and four children. He is a member at Pathway Community Church in Elmhurst, and currently serves on the board of Courtside Ministries, a prayer ministry for people on their way in and out of court.